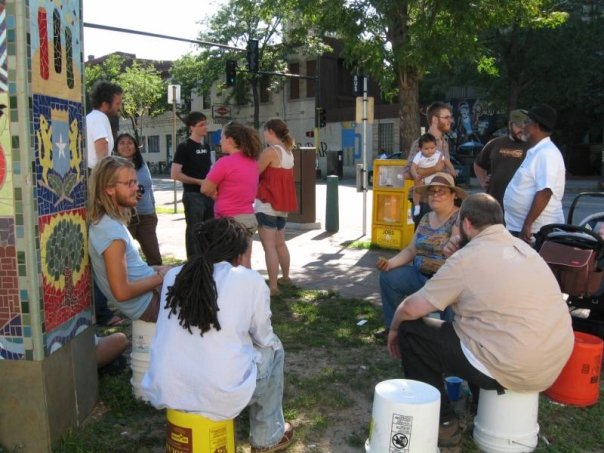 The Hospitality Train has been derailed again, this time by the Minneapolis Department of Community Planning and Economic Development (CPED.) Last month, TC Daily Planet’s Amanda Noventa wrote about the project of Missio Dei, a group that for the past two years has hosted meals on Saturdays at a West Bank vacant lot. Local businesses and City Councilmember Cam Gordon voiced support for the group’s soup and socializing mission.

Noventa wrote that on September 25, for the first time in two years, the police interrupted the group’s activity asking if they had a permit to give away the food.

The West Bank Business Association had a temporary lease to have community events on the property over the summer, which expired on October 31.  It was a special use permit that covered the flea market that WBBA would host.  WBBA had given permission for Missio Dei to use the space for their Hospitality Train.

Lisa Hammer, from the West Bank Business Association, said that over the summer Missio Dei had been “incredibly respectful.”  Some of the participants also sold their art in the flea market, she said.  “It was never an issue—they were kind and considerate.  They cleaned up the lot.”

Hammer first heard about the September incident a month when she got a call that the police had kicked off the group, using a bullhorn to do it.  Then two weeks ago she received a call from the CPED, saying CPED did not intend to let the activities continue.

In telephone interview, Kristen Guild, manager of business development with CPED, said that the property in question was “not public right of way” and that the city owned the property for the purpose of development.  WBBA’s lease, she said, did not allow for any food uses on the property because of licensing and also zoning issues.  The lot, because it is not paved, cannot be used to serve food, she said.

CPED didn’t call the police, according to Guild.  “The police were just doing their jobs.”  She spoke of crime problems in the area, but according to Lisa Hammer and City Council Member Cam Gordon, the group was not a cause of any problems, and indeed were a bright spot for the neighborhood.

“It seemed like a positive thing that was going on in that lot,” Hammer said.

Regardless, Guild said that food regulations didn’t allow the group to serve food, and that they additionally would need a food service license, which means preparing the food in a commercial kitchen.

“I’m hoping there isn’t similar troubles for other smalls groups of people who provide public meals on public spaces,” said Missio Dei’s Sarah Lynne. “The concern most often brought up is the backwardness of bothering people doing something positive in spaces like empty lots that are often used in shady ways and an eyesore for neighborhoods.” As for her group, they will not be serving any more meals until the spring, but hope to find a space where they will be able to serve food by then.

Cam Gordon has been supportive throughout the process, including speaking with police when the problem initially arose.  “I want to see if there is a way we can do it with permission,” he said.