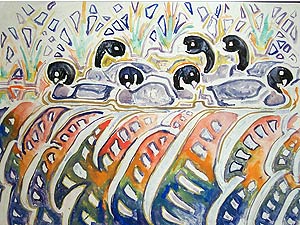 Members of GAIN (Gathering of Artists and Illustrators of Nature) and the Botanical Art program at Como Park Zoo and Conservatory marveled at Anderson’s use of line and pattern in the sometimes whimsical ink drawings, watercolor paintings, block prints, and decorated pottery.

Several of Anderson’s illustrations of animals elicited laughter in the visitors, from a watercolor of a “Contented Raccoon” to an ink drawing of frogs in a repeating pattern that one observer noted resembled a chorus line.

The work on display also included ink drawings of fish that resembled Japanese art, contour patterns that looked very much like Aztec designs, and stylized flower illustrations in the manner of the Art Nouveau movement; his watercolors contain a complex mix of color and pattern–and all of the drawings and paintings were done on plain typewriter paper. The large, intricate block prints were made from discarded linoleum flooring and printed on wallpaper.

Anderson was fascinated by the work of Charles Darwin, and drew illustrations in ink while reading Darwin’s “The Voyage of the Beagle,” some of which are exhibited here, along with a quote from the artist: “Science may discover what art has known for a long time–the more that is known, the more there is to be known.”

From the November print edition of The Observer:

By Shannon Gibney
Besides forcing a mass exodus of human and animal life from the Gulf Coast, Hurricane Katrina also sent art lovers into the waters on a rescue mission.

A museum dedicated to the work of the late naturalist Walter Anderson, whose paintings will be exhibited at the Bell Museum November 5 through February 5, was overwhelmed by Katrina’s flood waters, which were more than 25 feet high in some parts of Anderson’s hometown of Ocean Springs, Mississippi.

“It’s amazing, you can stand down next to the water by the trees and see flotsam and jetsam,” said Patricia Tinson, curator of the Walter Anderson Museum of Art in Ocean Springs. “Anything that was in its path it took.”

And that left the Anderson family, which owns most of the painter’s work, with the difficult task of recovering and salvaging what they could of his paintings and drawings. “Their vault is completely gone and underwater,” said Dennis Walker, the museum’s registrar. “I was able to get down there with the gift shop manager, and we found Anderson family members down there, desperately trying to get the art work out. Needless to say, large oil paintings on wood or canvas were easy to deal with. But other works were more difficult.”

The Recovery Effort
“Walter Anderson would dig up linoleum flooring from the ship yards from World War II,” Walker explained. “He would carve these intricate pictures on them—depictions of nature, or fairy tales, anything that struck his fancy. Then he would roll it in ink or use paper (wallpaper) or cotton behind it. It was the most economical paper he could get. He did 310 of them that exist, some of them are 12 feet long. He was the first person to do such large block prints ever—both in Europe and the U.S. He did them between 1943 and 1946, working here in Ocean Springs.”

But recovering them was no small task. “The oils on canvas and oils on wood were no problem as far as drying them out,” Walker said. “The large block prints I just described, however, and the hundreds of 8-by-11 prints on acid-free paper in acid-free boxes, were more difficult. There were either watercolors or pen-and-ink drawings.” Walker, the Anderson family, and volunteers took the first step towards savings these extremely delicate prints.

“We spread out paper on the floor, and we had to separate them one by one, and let them dry out,” he said. “This took three weeks, seven days a week, 12 or 14 hours a day. We had four people down there working all the time, and then we had volunteers that would come and go. The volunteers saw it was daunting work, so they tended not to come back after the first day. It was a little bit dirty work, too—it smelled because of silt.

“After that, conservators have to take over [preserving the work],” Walker continued. “We can’t do anything else until the family is able to raise the money to pay the conservators, which will be exorbitant. The museum can’t house the paintings because they’ve been exposed to salt water and mud and everything else, so we can’t have the contaminated pieces in the museum that might contaminate pieces from our collection. So the contaminated prints have been transported to the Archeological Department at Mississippi State University.”

Tinson said that once they are at work, conservators will do a chemical analysis of the paper, to see what things are in it, besides salt, that would be detrimental to the art pieces. “The salt is not the worst problem. There is mud, and there was a lot of leaf matter, and anything that contains tannic acid will discolor quickly. Tannic acid is the acid that makes the flood water black—it’s acid in wood and leaves. Wherever that was found, they tried to get it off or to freeze it. But most of it just had water damage.”

Museum staff said that part of the reason the Anderson family is having trouble raising funds to restore the work is that they are a for-profit entity. “The family is working as much as they can to get funding through the Web site and a number of other things to give to the Walter Anderson Rescue Fund,” said Tinson.

Although the museum is a nonprofit, and completely separate from the family, Tinson said they are struggling. “Our main question right now is, ‘Are we going to be able to stay open after three months, with basic operating expenses?’ We’re the main way for the public to see Walter Anderson’s art. It costs to keep the museum open, and to keep the staff in and to do another show other than the one we have up, and to do grants, and tours for school children. Our real problem is being able to find operating funds. We also need funds for stuff that we lost. We lost about $100,000 in store merchandise, and stands and crates that we use to ship things out.”

A Southeastern Superstar
Tinson calls Anderson “probably the most important painter to come out of the Southeastern United States,” and is thrilled that Twin Cities audiences will have the opportunity to view his work.

“Anderson died in 1965, so you’re talking about an artist producing mainly in the thirties and forties,” she said. “He’s an artist who is in many ways a regionalist, because everything that he does in his mature period is about the plants and animals in this area. Anderson’s work is very much like John Marin and some of the other Northeastern artists that were also painting at this time.”

But with a difference. “Marin is written up in the history books, and Anderson is not. The reason for that is that Marin was in the Northeast, where all the art critics and art appreciators lived,” Tinson explained. “That tends to be the work that was more written up—as well as the work coming out of the Midwest. Anderson also never tried to get his work out. He had a different reason for doing it, and that was sort of the whole attitude of discovery for himself. “

He was, said Tinson, less concerned about fame than about self-realization. “He had a philosophy very much like Leonardo Da Vinci, which is that art is a tool that you use to learn. And he used it as a tool for what he called ‘realization.’ That was of identifying and having that sudden sense of identity and understanding of the object that you were looking at. So when he was painting a bird, he said that in that fraction of a second, that is the only bird, and you are the only man.”

Thanks to a recent Centennial Exhibition, which traveled to the Smithsonian and celebrated Anderson’s birth in 1903, Anderson’s work is finally starting to get the recognition it deserves. “Critics have said that Anderson’s work captures the essence of the creatures that’s very rare in art,” Tinson said. “So when you’re looking at a picture of an owl, it captures what the owl looked like, certainly, but it’s the movement and the characteristics and the personality of the bird that you really see.”

And although Katrina may have stalled this recognition of Anderson’s work, Tinson believes that it is also an important reflection of the artist’s relationship with the landscape that formed him. “I think that Walter Anderson would have taken this hurricane in stride,” she said. “A lot of his work was destroyed, but he destroyed a lot of his work himself, because he understood that it was not an end in itself. And he understood the power of nature.”