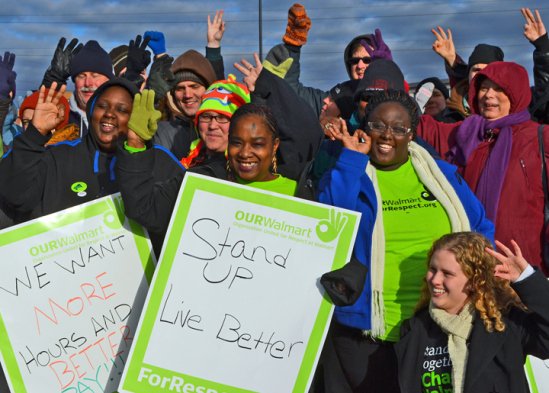 The Brooklyn Center strike is the first of several actions planned this week targeting low-wage employers like Walmart.

The nationwide wave of Walmart strikes hit Minnesota this morning, when three women who work at the Brooklyn Center store informed management they were going on an unfair-labor-practices strike.

U.S. Rep. Keith Ellison and Rev. Doug Mork of nearby Cross of Glory Lutheran Church accompanied the workers into the store, and dozens of supporters from faith, labor and community groups greeted them on their way out, ready to erect a picket line.

Andrea Williams, April Williams and Lillian Griffin said they decided to take a stand after attempts to organize for better wages, meaningful benefits and a voice on the job drew retaliation from store managers.

“If you try to speak out to management, they retaliate,” Andrea Williams said. “They cut your hours.”

The three workers are a part of the non-union organizing group OUR Walmart, which is giving voice to Walmart associates and has supported similar short-term, ULP strikes across the country over the last year.

The strike kicks off a week of action in the Twin Cities targeting low-wage employers like Walmart. The week will culminate withBlack Friday events, including a march to the Midway Walmart in St. Paul.

Workers in Miami also went on strike this morning, and Walmart stores in Sacramento, Tampa, Dallas, Chicago, Seattle, Los Angeles and Ohio have seen strikes this month as well.

The strikes build momentum heading into Black Friday, the biggest shopping day of the year, when OUR Walmart claims workers and activists will protest outside 1,500 stores nationwide. [Click here to RSVP for the St. Paul event on Facebook.]

The strikers’ demands – a living wage, full-time scheduling for workers who want it and an end to retaliation – hardly seem like too much to ask from a company that turned a $15.7 billion profit last year.

Yet Griffin and Andrea Williams earn just $8.40 per hour, while April Williams, a single mother, earns $9.50. The three women use Walmart’s benefits sparingly – Griffin said she can afford only the company’s vision plan – and rely on public assistance programs like food stamps and Medicaid to meet their needs.

A recent report by Minnesotans for a Fair Economy estimated the cost to taxpayers of providing public assistance to Walmart workers statewide at $40.6 million per year.

How much of a raise do workers want? “With the money Walmart makes, I think at least $13 per hour,” Andrea Williams said.

Ellison agreed, but the DFLer, who represents Minnesota’s 5th Congressional District, said Walmart was not the only employer paying poverty wages. That’s why Congress should act to raise the minimum wage for all workers, he said.

“This is not just about this Walmart or this company; this is a low-wage problem that is hurting the whole country,” he said.

Low-wage employers are the target of a series of events planned this week by OUR Walmart and its allies, including the Minnesota AFL-CIO, the Service Employees International Union, Minnesotans for a Fair Economy and TakeAction Minnesota. A protest Wednesday will call attention to poverty wages paid by customer-service contractors at Minneapolis-St. Paul International Airport, andjanitors who clean Target stores in the Twin Cities plan to stage a one-day strike Friday morningdowntown Minneapolis.

When the week of action concludes with hundreds of people marching to the Midway Walmart, the three striking workers from Brooklyn Center will be leading the way. With support from Ellison and so many community members, the strikers were hopeful they would not face retaliation from management upon their return to work.

“There might be retaliation for this, but we’re out here,” Griffin said. “So there’s no going back now.”