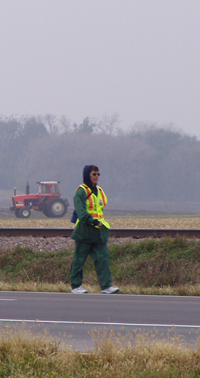 Sue Eichstadt walked from her home in Windom to the State Capitol to highlight the need for affordable health care.

If Esther Eichstadt hadn’t had to go into long-term care, and if she hadn’t been left, as a result, with so little pocket money that she could no longer get her hair done or buy small gifts for her grandkids, state Sen. Linda Berglin might not be presenting a health care amendment to Minnesota legislators this winter.

But Esther wasn’t just anybody’s mother-in-law—she was Sue Eichstadt’s mother-in-law. And when Eichstadt gets mad, as she’s fond of saying, she walks. In this case, she was so angry (make that “hopping mad”) at the way her mother-in-law lost everything—including her dignity—to pay for health care, that she took a week off from work and walked from her southwestern Minnesota home to St. Paul to raise the issue with Minnesota legislators.

“I was walking for an amendment to the Minnesota Constitution for affordable and accessible health care for all Minnesotans,” said Eichstadt. “It’s just very simple. My reason for the amendment was that it makes our legislators accountable for health care. They have to join together, put their differences aside and solve this problem.…To me this is so hard on the elderly. They work all their lives and then it turns around to where they think they’re a burden to their kids.”

In her seven-day walk, Eichstadt found several hundred people who think the way she does, and they signed a petition to that effect. On her arrival at the Capitol, there were plenty of cameras and microphones waiting. Sen. Linda Berglin personally accepted Eichstadt’s petition and promised to propose a health care amendment in committee.

But this walking woman is not satisfied. The success of her walk has merely encouraged her to plan another one. After all, it’s not like the health care system has been fixed.

“In my opinion it’s not done,” Eichstadt said.

A good kind of anger
Eichstadt is no stranger to walking. At the Toro factory in Windom, she inspects parts as they come off the paint line. “We have three paint lines and 12 assembly lines, so it requires a lot of walking, because I go from line to line to line,” explained Eichstadt. “I was exhausted when I first started this job.”

When she bought a pedometer, she figured out why: on average, she walks about 10 miles a day. On a slow day, she’ll cover six to seven miles.

Eichstadt is proud to be a member of the Machinists’ Union, Lodge 1956. According to her, union representation is the only reason she and her colleagues have good health care.

“There’s nothing better for a company than to drop your health care or make your premiums higher or give you higher deductibles,” she said. “Our [union] shop committee has worked very hard to keep out-of-pocket expenses down.”

Eichstadt, her husband, Dayle, and their youngest daughter, Tanisha, are covered under family insurance for about $150 per month. Two older children no longer live at home; one son, T.J., 19, lives at home but isn’t on their policy.

So it wasn’t a sense of personal desperation that drove Eichstadt, but simple outrage. One day Eichstadt told a friend she had half a mind to walk up to St. Paul and tell them what she thought of the system that robbed her mother-in-law of almost all of her meager income. Her friend said the equivalent of “Well, why don’t you?” and that was that.

Eichstadt had attended a Wellstone activist camp a few months earlier, and she remembered this piece of advice: find someone who’s as excited as you are about your cause. She took to the phones. After being rebuffed as a crazy lady several times, she connected with coworker Laurel Pfeiffer, who volunteered to help. She also found union and DFL supporters. Once Eichstadt had a partner, she began to train by walking 15 miles after work every other day.

What it means to go the distance
The Great Health Care Walk began on Saturday, October 29. That day Eichstadt walked from Windom to St. James, a distance of 34 miles. She wanted to make Mankato by the second night, which she did—walking 33 miles the second day. Pfeiffer followed Eichstadt in a van with supplies: food, water, clothing and her second pair of New Balance 834s (“Made in the USA,” boasted Eichstadt), so that she could alternate shoes every day.

Though she’d put a lot of effort into preparing for the walk, there was one thing Eichstadt didn’t foresee: because of the slant of the pavement (she walked on highway shoulders), her right foot rubbed relentlessly against the side of her shoe. By the end of the second day, she had a huge blister, and she had to tend to blisters from then on, trying to keep them from getting infected.

In each town—starting in Windom—Eichstadt planned a town meeting where residents could share their concerns about health care and sign her petition calling for a state constitutional amendment guaranteeing citizens the right to affordable health care.In Mankato, the turnout was “awesome,” Eichstadt recalled. About 60 people showed up. In St. Peter, on the third night, people met at the community center; the next night in Belle Plaine, at a Lutheran church; in Apple Valley at a library and in Mendota Heights—the last night of the walk—at a bar. “That was the best meeting, at Gallagher’s,” said Eichstadt. “They weren’t unruly or drunk, it was just people who came in and talked. I think I had 66 signatures just from that bar.”

Many of the people Eichstadt talked to didn’t have health insurance because they’d lost their jobs. Although some qualify for MinnesotaCare, the state’s insurance program, that coverage only pays for so much and additional costs are out-of-pocket. One fellow, who’d had a heart attack while uninsured, treated Eichstadt as a celebrity.

“He gave me a big hug and followed me around and would not let me go,” she recalled. “He made all his friends sign the petition.”

Although Eichstadt found supporters for her walk mainly among progressives, she doesn’t see health care as a partisan issue. She has sympathy for conservatives who still want to be loyal to their party but recognize the depth of the problem.

“We had everybody come out,” she said. “There’s a lot of them that didn’t want to go into the meeting—didn’t want to be seen with the DFL union folks.… A lot of these are my friends down at work, and they are very committed to the Republican platform, but they’re getting disgusted with what’s going on with health care, because it’s hitting everybody in the pocket very hard.”

DFLers and Republicans alike understand where all that money goes, said Eichstadt. “Most of the comments were, ‘The only industry that is really making it is the pharmaceutical companies and the insurance companies.’ But yet at the same time the very first question they ask me is, ‘How are you going to fix this? Are my taxes going to go up?’”

To which Eichstadt retorts: “If I had a solution to this problem, I wouldn’t be walking to St. Paul, I’d be running—running for office.”

The return
When Eichstadt finally reached St. Paul on the morning of November 4, she’d walked much further than the reported 154 miles, thanks to a couple unexpected detours: her total mileage clocked in at 172.1.

The hardest part of the walk was being away from 10-year-old Tanisha for a week, said Eichstadt. But Tanisha was waiting as she approached the Capitol.

“She was there that last stretch,” said Eichstadt. “I saw Tanisha and I waved and she took off running and I totally forgot about my sore feet and I took off running. I crouched down and we both cried so hard because I had not seen her for that week. She was so excited to be a part of that day. She stayed right with me in the Capitol. It was just an awesome day.”

Another surprise, not as joyous, awaited Eichstadt back home. Her son T.J. was dropped from the family insurance in September because he’s not attending college and couldn’t sign up for MinnesotaCare until he’d been uninsured for four months. After Eichstadt had finished her health care walk, he was diagnosed with a condition that will require surgery, but because it’s now considered a pre-existing condition, insurance won’t cover the expense.

For Eichstadt, it opened up yet another window into the ailing health care system.

“My thought process was for the elderly and people who’d lost their jobs…never did I think about the young kids just out of high school, and they have to think about not going to the doctor because they can’t afford it,” she said.

It’s just one more reason she’s already eagerly planning the second walk. “We are doing it again,” she said. “If the committee decides to put [the amendment] to the House and the Senate, to see if they put it on a ballot—hopefully it will get to that point—before they vote, we’re going to walk. So we’re talking, hopefully, April or May.”