Since the Minnesota Supreme Court bounced Emmer’s petition on Monday, the press has not been kind to the notion of legal appeals of the coming hand recount. In Fireworks at the Supreme Court and other incendiary reports, Mankato Free Press editor Joe Spear writes:

. . .What I found interesting about the ruling was that it was issued without an opinion, so as “not to impede the orderly election process.” The court seemed to be hinting that another challenge might have to really provide earth shattering new information, or the court, mostly Pawlenty-appointed, would reject that as well. Just my guess, though.

In my opinion, any further challenge without such significant backing will come off as frivolous to the judges, and when judges think you’re wasting their time, the don’t get mad, they get even, or they get mad and even.

I’ve seen many a judge use the rule that “their impartiality ends where your frivolity begins.”

News reports called the ruling from Pawlenty-appointees “terse.” Maybe it’s payback for Emmer who called them “activist” last year after they ruled Pawlenty’s unallotment was illegal. Pawlenty was kinder but said the ruling was “unwise.”

Republicans challenge at their peril here. As I mentioned in Wednesday’s editorial, “voters can forgive politicians for a lot of things, but not for denying them the right to have their vote counted.” Any challenges from Emmer, at this point, seem to be playing with fire near a propane tank. . . .

Would that explosion yield the double tap necessary to finally stop this faltering gubernatorial bid in its tracks?

There are suggestions that even Zombie Tom Emmer is aware it’s time to stick a fork in it. MPR’s Explainer takes a look at the notion of an “overvote” here.

Republican Tom Emmer says he is not giving up on becoming Minnesota’s next governor.

But trailing by 8,770 votes in the unofficial state canvassing board results released this week, Emmer said Wednesday he would not go to court to contest results of a recount scheduled to start Monday if it’s clear he can’t win.

“I don’t want to put myself or others through a futile process,” he said in an interview. . .

Emmer still owns a law firm and advises a few business clients but is not actively practicing law.

How will he support his wife and seven children? “I’ve got to figure that out. I expected to win,” he replied.

Emmer could always extract a few pennies from the family home, I suppose. 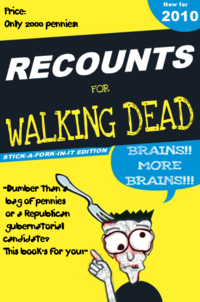