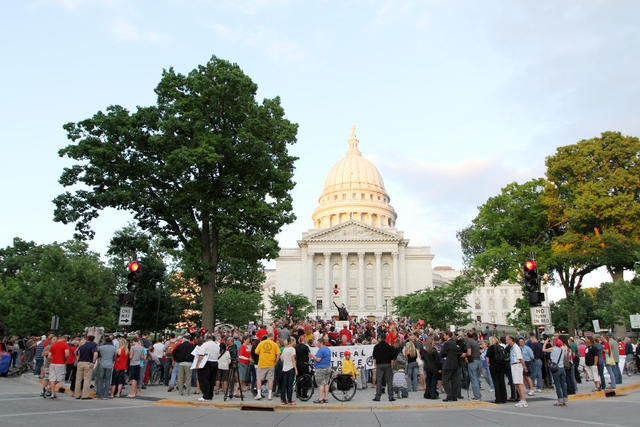 A crowd of hundreds gathers on the front steps of the Wisconsin State Capitol after the polls officially closed on the June 5 recall election. (Photos by Marisa Wojcik)

Wisconsin Gov. Scott Walker beat back a recall challenge Tuesday, winning both the right to finish the last two years of his term and a voter endorsement of his strategy to curb state spending, which included eliminating union rights for most public workers.

The Wisconsin recall fervor swept across the nation and Minnesota, drawing students and volunteers across state lines to campaign in Tuesday’s election.

About 75 students and volunteers from Minnesota, including about 20 from the University of Minnesota, bused with the Democratic Farmer Labor Party to Eau Claire, Wis., to door-knock all day Tuesday.

Minnesota College Republicans have traveled to Hudson, Wis., multiple times in groups of 20 to 25 over the past months to make calls for Walker from a phone bank.

Democrats and organized labor spent millions to oust Walker but found themselves hopelessly outspent by Republicans from across the country who donated record-setting sums to Walker. Republicans hope the victory carries over into November and that their get-out-the-vote effort can help Mitt Romney become the first GOP nominee to carry the state since Ronald Reagan in 1984.

With more than 90 percent of precincts reporting, Walker had nearly 54 percent of the vote, compared with 45 percent for Milwaukee Mayor Tom Barrett, according to unofficial returns tabulated by the Associated Press.

Regardless of political belief, the same theme echoed among Minnesota students: What happens in Wisconsin won’t stay in Wisconsin.

The rising Republican star becomes the first governor in U.S. history to survive a recall attempt by defeating Barrett and the union leaders who rallied for months against his agenda.

The recall was a rematch of the 2010 governor’s race. Throughout the campaign, Walker maintained his policies set the state on the right economic track. Defeat, he said, would keep other politicians from undertaking such bold moves in the future.

“Tonight we tell Wisconsin, we tell our country and we tell people all across the globe that voters really do want leaders who stand up and make the tough decisions,” Walker said in his victory speech in Waukesha Tuesday night.

Ryan Lyk, a University student and the state College Republicans chair, said the group views the election as a broader referendum on issues.

“We’re really proud that there’s a governor nearby that’s doing some great things,” he said. “Hopefully, that mentality will bleed over to Minnesota.”

Larry Jacobs, a Humphrey School of Public Affairs political science professor said a Walker victory is a green light for conservatives to pursue a similar agenda.

“There’s no doubt that the Republican Party in Minnesota would like to jump on the magic carpet of Scott Walker come November,” Jacobs said.

In a brief speech to volunteers before they boarded two coach buses, DFL party chair Ken Martin said, “We cannot allow Scott Walker to get away with what he did in Wisconsin. If we do, there’s no doubt that that will continue to travel west here to Minnesota; it will travel throughout this country.”

One DFL campaigner was Taryn Brown, 23, who works at the state DFL and whose parents are Minnesota union workers.

“What happened last year kind of scared the crap out of all of us,” she said.

Quentin Wathum-Ocama, an urban studies senior at the University, canvassed with the DFL.

“We’ve seen unions and collective bargaining rights under attack the last few years, and it’s time to turn back,” he said.

Supporters of both sides said Tuesday that efforts were focused on getting people to the polls, not about persuading them to vote for a certain candidate.

As DFL volunteers ventured door to door, few residents answered and those who did had mixed reactions. Some areas had been pre-canvassed so volunteers knew which doors to knock on; in other areas they conducted a “blind knock,” tapping on every single door.

Other interest groups were also out in full force, leaving literature on doorsteps and knocking on doors.

“I just want to get people politically active,” said Courtney Juds, a political science major at the University. “I think a lot of the issue is that people feel apathetic at this point.”

“I’m hoping to get as many people out to vote as possible,” Wathum-Ocama said. “Democracy’s a really powerful thing.”

Theirs and others’ efforts may have had some success: polling places reported extremely high turnouts across the state.

Madison seemed quiet in late afternoon, but crowds quickly swelled at the Capitol as evening approached.

People decked in solidarity T-shirts and costumes filled the steps facing State Street, drumming, singing and chanting “this is what democracy looks like.”

“This is the only place to be tonight,” Nancy Julien said as she sat on the steps awaiting results.

“The chips will fall where they may.” 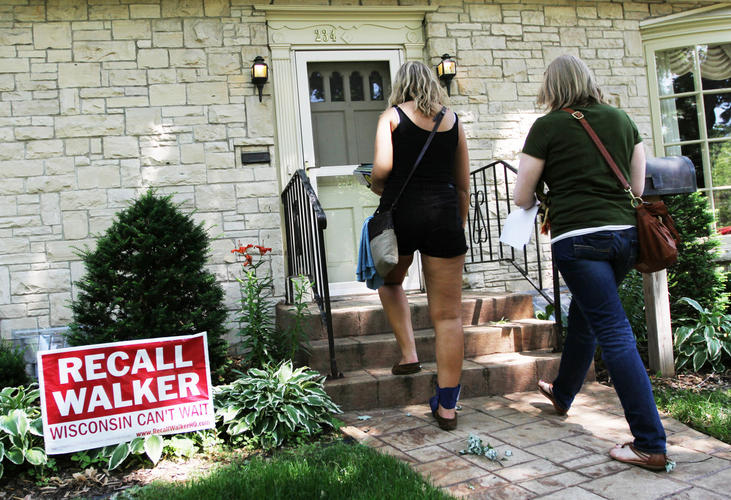 Political science junior Daveen Trentman, left, and Taryn Brown from the DFL knock on doors to persuade voters to get to the polls and vote for Gov. Scott Walker’s challenger Tom Barrett Tuesday in Eau Claire, Wis.

Many expect the outcome of this election to portend the November results.

“It’s hard at this point to conclude that there’s a referendum in Wisconsin with broader national implications, though lots of reporters want to go there,” said Jacobs, the professor. “This may just be an election in Wisconsin that’s kind of like a family fight at this point.”

However, Jacobs said, “If [Walker] wins the recall, it’s a green light for Minnesota Republicans to press ahead.”

“If we have a mentality that what happens in Wisconsin will stay in Wisconsin, we’ll be sadly mistaken,” DFL volunteer Wathum-Ocama said. “[This] will travel and transgress state borders, and I don’t want that in Minnesota.”

Democrats and Republicans acknowledged one major accomplishment: He has closely united each party.

“[Walker] brought everybody out of the woodwork,” said 52-year-old Judy Evenson, a Barrett supporter.

“He brought the Democrats together,” Julien said.

Rachel Jansen, a political science junior and a member of College Republicans, said the Minnesota Republican party has also become more united in face of the Wisconsin recall.

“We became closer as a party,” she said.