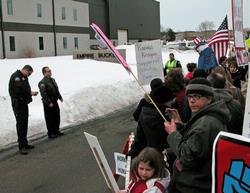 Wisconsin’s Democratic senators have returned to Madison, where Republicans unilaterally pushed through legislation stripping the state’s public employees of their right to collectively bargain, rolling back five decades’ worth of gains on behalf of workers’ rights.

Opinion polls show the GOP’s power grab outraged a majority of Wisconsinites, more than 100,000 of whom crowded Madison’s Capitol Square on March 12, one day after Gov. Scott Walker signed the collective-bargaining measure into law.

Activists at the massive rally pledged to keep fighting for middle class families and against union busting, but with the law now passed, what’s the next step in that fight? After a month of high-profile, public demonstrations captured the nation’s attention, how does the labor movement build on that momentum?

The popular answer – at least among the 200 people who welcomed Walker to a speaking engagement in Hudson, Wis., on March 15 – seems to be recalling Walker and his supporters in the Wisconsin Senate.

As Walker touted his budget proposal – which slashes $1.5 billion in funding for public schools, local governments and Medicaid – inside a manufacturing facility, chants from protesters outside warned the governor to expect a “recall,” or a vote on whether he should stay in office.

Ken Krohn, a retired member of the United Auto Workers from New Richmond, said he supports efforts to recall Walker because the governor, while campaigning for office last year, never made public his plans to strip teachers and other public-service workers of their union rights.

“He’s a pretty big sneak,” Krohn said at the Hudson rally. “Who does he think he is? I’d like him out of here.”

State law prohibits citizens from recalling an elected official until the official has served one year in office. That means Walker is safe until Nov. 3.

Several of the senators who voted with the governor, however, aren’t so lucky.

Nan Lambert of Hudson circulated through the crowd of protesters yesterday, collecting signatures on a petition to recall Sen. Sheila Harsdorf, whose 10th District includes Hudson, Prescott, Menomonie and River Falls. Harsdorf voted with Walker to undercut the union rights of public employees, despite pleas from constituents like Lambert to broker a compromise.

Lambert decried “outrageous, underhanded, closed-door, backroom tactics” used by Republicans like Harsdorf to pass the bill without any Democrats present.

“It’s not for the people, it’s for the corporations,” Lambert said of the measure. “All the power and money is going to the top. This isn’t about Democrats and Republicans. This is about corporations and the working people.”

Lambert and others working to recall Harsdorf are likely to find plenty of allies in Minnesota.

Tomorrow, union leaders from areas of Minnesota that border Harsdorf’s district will meet in St. Paul to discuss how they can assist in the recall campaign.

“We will be talking about what Minnesota unions can do to help Wisconsin workers continue the fight for their unions,” said Bobby Kasper, president of the St. Paul Regional Labor Federation, which organized the meeting.

Support from Minnesota unions – many of which have professional staff and deep volunteer lists – has the potential to be a difference-maker in recall efforts.

What’s more, many unions that affiliate with Minnesota labor federations, including the St. Paul RLF, represent workers who live in Wisconsin. That relationship opens a direct and effective line of communication to Wisconsin voters.

If those voters are anything like Kevin Carrier, they won’t require much convincing to sign a recall petition. Carrier, a former teacher from Hudson, can hardly wait for Nov. 3, when he and other Wisconsinites will get their chance to sign a petition to recall Walker.

“I don’t know how he expects an educated workforce when he’s cutting millions and millions of dollars in school funding,” Carrier said at the rally in Hudson. “We’re going to turn into ‘Third World Wisconsin.’ It’s just not the direction our state needs to go.

“I think he’s got tunnel vision on this. I don’t think he wants to listen to anyone but his own cronies that he surrounds himself with. I don’t expect him to get it until he gets voted out.”