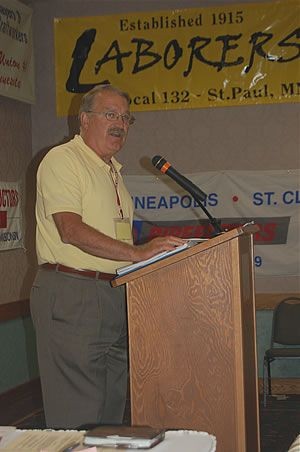 Under Ray Waldron, the outgoing Minnesota AFL-CIO president, the statewide labor federation has held membership steady at more than 350,000 despite conservative state and federal administrations and internecine union squabbles.

“It’s not enough, but it’s a start,” said Waldron, who is turning the helm of labor’s cause over to Shar Knutson on Oct. 1. “These are working people who put working people first.”

Waldron, 62, of St. Anthony Village, has headed the state federation of more than 1,000 unions since 2001. He was the federation’s secretary-treasurer for two years before that and has held various labor leadership jobs since 1974.

He was an air traffic controller waiting for a new assignment in 1970 when he was invited to join a roofing crew for the down time. “It paid well and you could drink beer at lunch,” he said. “What’s wrong with that?”

Within a few years he was elected the business rep for Minneapolis Local 96 of the United Union of Roofers, Waterproofers and Allied Workers. That led to jobs at the Minneapolis Building & Construction Trades Council and the Minnesota AFL-CIO.

Waldron also is a board director of the Union Bank and Trust Co., the Hennepin County Medical Center and the Metropolitan Sports Commission. He previously served on boards of the Vinland National Center for the disabled, the Minneapolis Urban League and the Tubman Family Alliance, which combats domestic abuse and is backed by an annual motorcycle Family Peace Ride sponsored by the state AFL-CIO and Harley Davidson.

At the state AFL-CIO, he oversaw decentralization of the federation’s political program with a permanent field staff and six regional units across the state. He also helped build the federation’s community affiliate, Working America, to more than 200,000 members in Minnesota.

According to national AFL-CIO President John Sweeney, Waldron often backed his reorganization efforts by “climbing on his Harley and driving long distances to talk one-on-one with local leaders and make the case for change.” In a message sent to his retirement luncheon last month, Sweeney added: “In the end, the hard work paid off … The end result is that countless Minnesotans have higher wages, more benefits and a better life.”

Waldron also opened the doors for more women on the state AFL-CIO’s board and staff, which led to Knutson’s election by the federation’s General Board as his successor. She will be its first female president.

Knutson has headed the St. Paul Labor Federation since 1998. She also has been a regional representative advisor to the national AFL-CIO, president of the St. Paul Labor Studies and Resource Center and member of the Greater Twin Cities United Way Board and the Humphrey Institute of Public Affairs Advisory Council. Minnesota 2020 wishes her and the Minnesota AFL-CIO well.