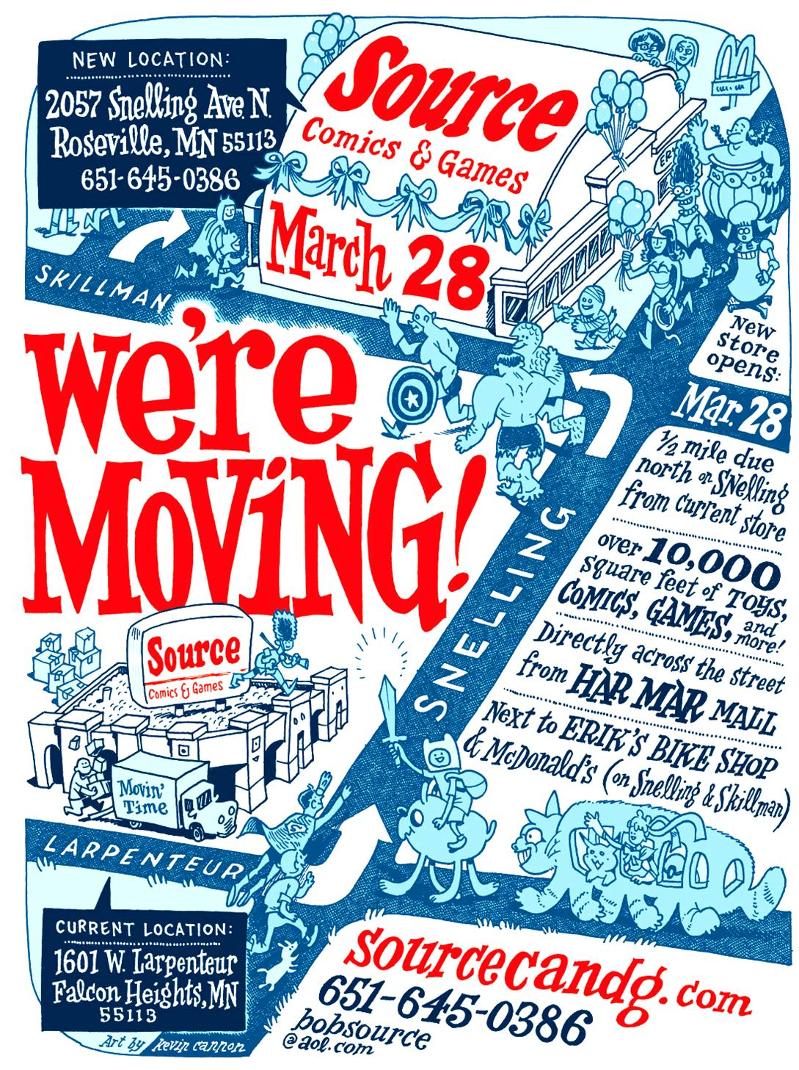 Imagine this: 300 people—some on foot, some in vehicles including cars, trucks, a motorcycle with a sidecar, and a wheelchair—all showing up at Source Comics and Games for the shop’s moving day, which involved transferring all of the Source’s comic books and games from 1601 W. Larpenter in Falcon Heights around the corner to 2057 Snelling Avenue in Roseville. It was “an army of volunteers,” according to Nick Postiglione, one of the co-owners of the shop. It brought tears to his eyes.

“We’re a pretty tight community,” Postiglione says. “There aren’t [many] stores like ours around. People have allegiance to us. We know their names. They know us, it’s a community.”

When the store was making plans to move, they laid out their predicament to their customers. On their website and in their newsletter, they asked if people could come and help.

The store has always had a responsive community. Even though it’s a for-profit business, its owners have been involved in charities and support events at schools and local nonprofits. They’ve also held fundraisers for people in the community who are sick and can’t afford health care.

“We’re not a typical box retailer,” says Postiglione. “We’re proud of our connection.”

It’s a business, of course, and the owners make a decent living, but they share the wealth. The store has full time employees who receive health care, dental insurance, and a retirement plan—things that other stores the Source’s size don’t offer. “We’re committed to our people,” Postiglione says.

“I didn’t get into this business to get rich,” he said. “I want to be able to see my son’s soccer game at three in the afternoon.”

The owners are also very involved with their customers’ lives. “We know when their kids are graduating,” says Postiglione. If someone is looking for a job, they’ll take the resume and circulate it among people they know are hiring. “We try to do what we can,” Postiglione says. “We’ve done a lot of little favors for people over the years. When we sent the call, we said ‘this time it’s us that need help.’”

For example, one member of their community who was very active in the gaming community got really sick. After a game one day, he said that what he really wanted to do was go to Disney World in Florida. The store sent out the call to help the individual, and ended up raising $8,000. “The group stepped up and bought the super deluxe for him. That’s the type of people they are.”

Sometimes people ask Postiglione what his secret is. The Source is one of the largest independent comic and game shops in the country. “We built a community and the rest takes care of itself,” Postiglione says. “People come into our store and say ‘I know it’s two bucks cheaper at Amazon, but I want to buy from you,’ to be part of something.”

And the community was ready to give back. “It was staggering,” Postiglione says.

What happened at the Source Comics and Games indicates a truth about volunteering. People who volunteer do so for many reasons: to give back to their community, to help others, to gain experience and skills, and to make friends, and for a whole host of other reasons, but it doesn’t have to be for an official nonprofit charity. Sometimes, people help out just to help out, and because they feel part of a community.

Another business owner, Tammy Ortegon, runs the Color Wheel Gallery, located in the Kingfield neighborhood of Minneapolis. The gallery doubles as a one-chair salon. Ortegon’s business is very connected with her neighborhood and her community, with her art shows tending to be mission-driven. Often, friends, neighbors and even customers have offered to pitch in when she might need help for an opening or an event.

“I have a hard time asking for help,” said Ortegon. People will ask what they can do, offering to help with preparations, or asking if they can bring food or a tent for an outdoor event. At first this confused her. “Why would you want to help me with my job?” she thinks to herself.

Her art gallery is a for-profit venture, as is her hair business. At the same time, it’s more than that. “I try to make a difference,” she said. “I try to show art that has a message.” She chooses artists who are teaching something, or reversing a stereotype that art is for rich people. “An art show is about community,” she said. “We all deserve art. I think there’s a lot of people that believe in that.”

Of course, there are downsides to utilizing volunteers, too, Ortegon said. “When you’re a volunteer, you don’t have to show up,” she said. A volunteer herself for different organizations, she knows that sometimes a volunteer doesn’t feel as obligated to meet their commitment. As a result, she doesn’t feel like she can rely on volunteers, in case they might forget or not be able to make it.

For herself, Ortegon volunteers at her kids’ schools, at neighborhood events in Kingfield. She also gets her shop involved in volunteering, like for the Empty Bowls Project. She’s also been active in political campaigns, for things like the two upcoming amendments, and by hosting her friend Tracine Asberry, who is running for the school board.

Keeping the good will—and the beer—flowing

When someone volunteers, they’re reward may just be the satisfaction of giving back, or it may be new friends, or new skills. At Summit Brewery, volunteers are given beer as a thank-you for running tours through the brewery. There’s an interview process people go through to become tour guides, but Summit is always hiring.

Eric Lavine is a lead tour guide at Summit; he’s been doing it for about seven years. An avid Summit drinker, he got into volunteering at the brewery through a friend. He loves volunteering there because he “likes to talk to people and likes free stuff,” he says.

When he started, he sent in a beer resume and eventually was “hired.” At first, he volunteered in the gift shop, where he would ring up customers’ purchases and put them in a bag.  Then he became a bartender, where he’d talk during the walking portion of the tour, and pour beer afterwards. Then, he began leading the actual tours—including anywhere from 60 to 100 people at a time. They walk all around the brewery.

The training he received was mostly hands-on. “You just kind of go on as many tours as you can,” he said. “Then you form your own tour.” Summit provides a guide: an outline guides can use, with tidbits like how many barrels are produced per year. Different tours will talk to varying degrees about the beer brewing process, he said.

A few years ago, Lavine took on the role of lead tour guide. He acts as a kind of liaison between the tour guides and the brewery itself. He helps hire new volunteers coming out.

Since he had twin girls a year ago, Lavine has been largely on hiatus from leading the tours, but he still helps out with scheduling. Leading tours is a three- or four-hour commitment, where you get two cases of beer for talking about something you love, he says.

Besides the beer, the volunteers become friends very quickly. They get chances to socialize especially on the quarterly tour, which includes a social hour and training. “I’ve become personal friends with quite a few people,” he said. “It attracts the same type of person to do something like that.” Even though they come from different backgrounds—some are doctors, some are lawyers, some are truck drivers—they all share a love of beer. They’ve been getting more women recently: now almost a quarter of the volunteers are women. Lavine also learned quite a bit about the brewing process.

Like many volunteers, Lavine doesn’t just volunteer for one place, though. He used to volunteer for the YMCA, and he also has a nonprofit, called the Sam Robert Lavine Scholarship, that he started when his son passed away. The organization gives a 2,500 scholarship to a graduating senior each year.

The Source’s moving experience reminded Postiglione of The Day the Earth Stood Still, when Nano Bots are wiping out buildings. “It should have taken us a week to move,” he says. “We got it all moved in about seven hours. That’s ridiculous. It was just an army of people: people in wheelchairs, young and old. It was a fine testament—it humbled us. The hard part is [knowing] how you say thanks!”