The Talent Show, a new exhibit at the Walker Art Center, was inspired in part by the ubiquity of social media—but don’t expect to find curator Peter Eleey on Facebook. “I hate having information about myself out in the public domain,” he told me as we walked through the exhibit on Friday afternoon.

The exhibit is an appropriate sequel to Eleey’s landmark survey The Quick and the Dead, which explored themes of time and space in contemporary art. That exhibit was heavy with conceptual art, which often involves the viewer’s participation, and the artist-viewer relationship is the explicit focus of The Talent Show.

Eleey is deft at handling the paradoxes of contemporary art, and The Talent Show is rife with them. It was inspired by social media, but except for one piece featuring YouTube videos, the Internet is nowhere to be seen. It’s a show about interaction, but not only is it not particularly interactive, it’s—to use Eleey’s term—”latently coercive.” As Eleey pointed out to me, the several rooms in the exhibit were deliberately arranged in sequence, so that whether you begin at one end or the other, you can only go back and forth; you can’t choose your own path. Even the exhibit’s name is misleading: “It’s not really as fun as the name makes it sound,” confided the curator.

Why so contrary? Because, Eleey explained, implicit in any interactive artwork or medium is an element of coercion. He cited canvases left deliberately blank by Robert Rauschenberg (not on display in The Talent Show), in the expectation that as viewers approached the pieces, their shadows would in effect become the art. “You walk into the gallery,” Eleey pointed out, “and you naturally want to approach the canvas to see if it’s actually blank. As you do, your shadow appears on the canvas and you’re part of the piece. It may seem cool to be a ‘part’ of a Rauschenberg, but there’s something coercive about it.”

Near one of the exhibit’s two entrances is Stranger (6), a photograph by Shizuku Yokomizo in which a woman stands expressionless in her home, looking at the camera. Eleey seems to see it as a touchstone for the exhibit; he mentioned it several times over the course of my visit. The photograph is part of a series in which Yokomizo left notes in people’s mailboxes, inviting them to become part of an artwork by turning on their lights and opening their curtains at an assigned hour of the night. When they did, the artist was waiting outside with a camera to photograph them and the interiors of their homes—but, as Eleey noted with a grin, all a subject would see from inside the house would be his or her own reflection in the window glass.

The fundamental transaction made explicit in Yokomizo’s work—I choose freely to allow you to incorporate me in your project, but in doing so I surrender any control of how you do so—is one that figures in many pieces in The Talent Show. In Phil Collins’s free fotolab, members of the public mailed their undeveloped 35mm film to Collins, who developed the film for free under the condition that he be allowed to use any of the developed images in his work. A room-size projection of Collins’s selection of the images is beautiful, moving, and (of course) disturbing. In Amie Sigel’s My Way 1 and My Way 2, Sigel presents clips of people singing along to Frank Sinatra’s “My Way” and High School Musical‘s “Gotta Go My Own Way,” clips culled from YouTube. Sigel did not secure her subjects’ permission—but of course, by uploading their clips for public viewing, the subjects gave blanket permission to the world. The fact that several of the subjects are young girls heightens any sense of unease one might feel about the piece. 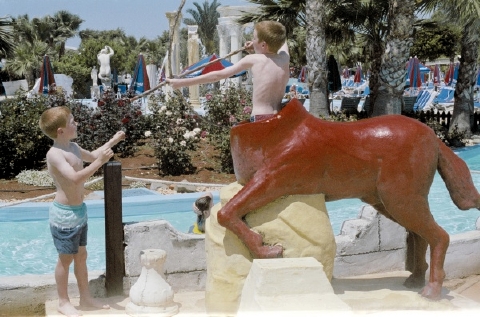 “In a sense, the whole show is in this room,” said Eleey as we walked into a gallery the walls of which are lined with pages from a sort of visitors’ log Adrian Piper collected at New York’s Museum of Modern Art in 1970. Visitors were asked to write whatever they wanted in the book, and over the course of 11 weeks, they filled seven volumes; Eleey selected pages from the volumes to display in The Talent Show, which also includes a reproduction of the full first volume. “You can’t make this up,” said Eleey multiple times as he walked through the room. Multiple people complained about being watched while they wrote, some left phone numbers, some drew obscene pictures or drew peace signs. The most telling of the lot is a page that reads, “Annoyed that this exhibit can’t leave me alone.”

But what did he or she want? In leaving one’s house and paying (the outrageous price of $1.50, complained one visitor) to enter a museum, one elects to become part of a collective experience—and to be, as Eleey might say, “coerced” by the museum’s curators. One of Eleey’s great strengths as a curator is his keen awareness of this fact, and his flair for the dramatic in his installations. A single curtained room (through which one must perforce pass) is devoted to David Lamelas’s The Limit of a Projection, which consists of a single spotlight shining on the gallery floor. Whether you choose to step into it is up to you.

Eventually, The Talent Show argues, we all step into one spotlight or another. “Being contemporary,” said Eleey, “means being on view.” It’s nigh-impossible to completely disappear in the 21st century (Eleey cited the example of Wired‘s Evan Ratliff, who put a bounty of $5,000 on his own head and set out—unsucessfully—to hide from the magazine’s readers), and yet it does happen. At the opposite end of The Talent Show installation from the Yokomizo photograph is a large projection of one of Andy Warhol’s famous “screen tests,” in which Warhol turned a camera on each of his subjects and instructed the subject to simply look into it.

Many of the screen tests feature established celebrities (Bob Dylan, Dennis Hopper), and most others feature people who have acheived fame at least in the art world through their association with Warhol—but the screen test chosen by Eleey is unusual in that it features a girl whose identity, beyond her first name, is unknown. “You would think,” said Eleey, “that given what Warhol has become, at some point the woman would have remembered that day she sat in front of Warhol’s camera and would come forward to identify herself.” But no one knows who she is, or what became of her. She’s disappeared, yet her image survives, and Andy Warhol—even after his own death—is using it still.