“We’ve gone through all the synonyms,” said the Weisman Art Museum’s Christopher James. “Ordinary. Common. Quotidian.” The theme has had only a very loose relationship to some of the museum’s recent programming—though Har Mar Superstar’s beer belly may be ordinary, nothing else about him is—but it’s a nice fit for the museum’s fine upcoming exhibit showcasing ten local artists.

The show, Ordinarily Here, opens on June 19; I walked through the galleries with James and curator Diane Mullin as the work was being installed. The work on display is fun, unpretentious, and full of interesting textures—both literally and figuratively.

Despite the fact that it was incomplete, the piece that made the biggest impact was the first one I saw: an installation by Diane Willow that fills the galleries’ entry hall. The piece, titled Bow, bow, bower, ower, bower (if you want to roll your eyes right now, that’s okay), is inspired by bowerbirds’ habit of collecting colorful baubles to decorate their nests. Visitors to the galleries will walk through a forest of bamboo poles secured with plastic zip-ties, live moss beneath them and interactive percussion above them. It’s a beguiling transformation of a space that, Mullin pointed out, is not typically seen as prime real estate for artists whose work is displayed there.

The rest of the exhibit is arranged spaciously in three large galleries, giving each piece the space to make an impact. You’ll want to stop at, look at, and think about each artist’s work.

Much of the work hinges on presenting commonplace things in new ways. Jennifer Jenkins translates graffiti tags into embroideries, then presents them in vintage frames. (My favorite was the one reading, “Wifey.”) Veteran photographer Vince Leo takes typos from his e-mail inbox and blows them up to dramatic proportions—though the one on display when I visited was coming down, as the printer had ironically made a typo in transcribing the typo. In A Theory of Ruin Value, Gregory Fitz arranges used tables and cinder blocks into a sculpture designed to be disassembled and put back into use after the show ends. 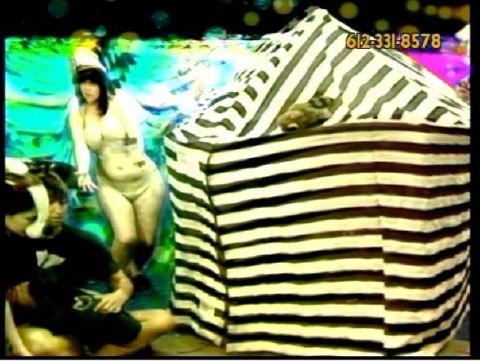 David Lefkowitz’s pile of bricks, some covered in aluminum foil, are also reused—they were from a wall of the museum that was torn down as part of its ongoing expansion. “So,” observed Mullin, “they were first ordinary bricks, then they were bricks that were part of a Frank Gehry building, then they were just bricks again, now they’re part of an artwork, and later they’ll be ordinary bricks again.” The construction crew, she said, were amused to see Lefkowitz pulling bricks out of a dumpster, and have been coming in to snap photos of the reclaimed refuse sitting in the middle of in the pristine white gallery.

In other pieces, the transformation from mundane to sublime has come through the application of an almost obsessive degree of meticulous attention. Valerie Jenkins’s 18’x3′ pencil sketch of paper shreds looks like a Drawing 101 student’s vision of hell; and Kimberlee Roth presents ceramic condiment dishes (there’s a pun involved, which you will understand when you see them) created in multiple—multiple multiple—and arrayed in a pattern on the gallery wall. Most astonishing are three sculptural pieces by Elizabeth Simonson, the result of highly involved creation processes that render wire, beads, and cellophane tape into absorbing mazes for the eyes.

You can even take some of the art home with you—Peter Haakon Thompson’s Tent Services features tents you can check out, with the idea that you’ll report back to Thompson the experiences you had in your tent. In another take on the idea of “home,” Adam Caillier’s photographs were created by Caillier visiting people’s living spaces and creating sculptures out of their belongings. Really, though, the best thing about Ordinarily Here is the fact that all of the featured artists are—fortunately for us—right at home.