Lester B. Morrison exists. I know, because I’ve seen him with my own eyes. He was at the Soap Factory on August 28—and so was Alec Soth. They’re not the same person, but the fact that anyone speculated they were tells you something about Soth and his new body of work, Broken Manual. That work makes its public debut this weekend as part of Soth’s survey exhibit From Here to There at the Walker Art Center.

Soth led members of the media on a tour of the exhibit Thursday morning, and afterwards he made a point of telling me just how pleased he is with the show. There’s never been a better chance to get to know the most acclaimed visual artist working in Minnesota today, and those who are already acquainted with Soth’s work will find plenty of new surprises. For Minnesota art lovers, From Here to There is the must-see exhibit not only of the season, but of the year.

Soth and curator Siri Engberg are resisting the label of “retrospective” for the exhibit, but as Walker director Olga Viso pointed out on Thursday morning, From Here to There is the first major U.S. exhibit spanning Soth’s entire 15-year body of work. (There was previously a survey exhibit in France, which was hastily assembled and which Soth seems to see From Here to There as a kind of correction to.) The show spans six galleries: one for Soth’s breakout project Sleeping by the Mississippi, one for his follow-up Niagara, two for videos and rarely-seen older work, one dedicated to photographs taken in Minnesota, and one for Broken Manual.

The artist is best known for the large-scale portraits in Niagara and, especially, Sleeping by the Mississippi, and those series’ most famous images are on display in From Here to There. Each of those projects comprises far more work than can be fit into a single gallery, but From Here to There offers a fair sampling of prints that speak to the projects’ themes. (Charles Erie, the subject of Sleeping by the Mississippi‘s signature image, told his story exclusively to the Daily Planet in 2008.) On Thursday morning, Soth indicated a photograph of Niagara Falls that’s printed at such a scale, he noted, the allure of the famous falls becomes very apparent. “That’s the thing about Niagara Falls,” he said. “It’s where people go to get married, and to kill themselves.” 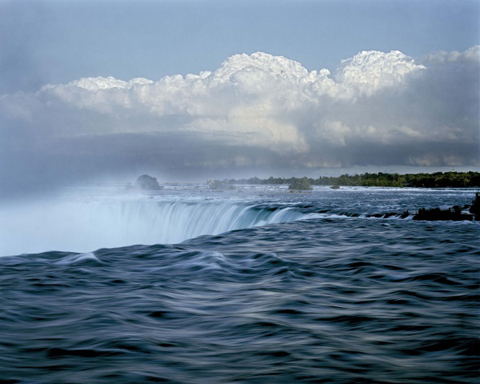 The exhibit’s central room introduces viewers to other dimensions of the artist’s work. A series of photographs of Texas movie theaters is an example of the assignment work Soth has been undertaking with the Magnum photographers’ agency, and black-and-white prints represent projects from the early 1990s. A screen features slideshows and videos Soth has been creating in recent years and posting online, and visitors can page through Soth’s published books—an important element of the show, since Soth conceives his projects in terms of books rather than gallery exhibits. (Read my review of the From Here to There catalog here.)

The work from Broken Manual is tucked into a dark, grey-painted gallery that was intentionally made to feel cave-like. Soth’s subjects for this project are men who seek to escape the world—but the work, Soth noted, ended up being to a large extent about the impossibility of escape. “Very few people,” he said, “ever really escape.” Ironically, Engberg explained, Soth found these loners by doing research on the Internet.

There’s ample continuity between Broken Manual and Soth’s previous work. The work on display at the Walker includes several striking photographs of people and landscapes taken in Soth’s trademark style, simultaneously an embrace of the rich detail of life and a detached gaze at people who are not Alec Soth, and who are (probably) not you. Whereas the photographs of embracing nude couples in Niagara highlight the detached aspect of Soth’s approach by making the intimate seem strange, these photographs of thorny outsiders in turn highlight Soth’s warmer side by making the strange seem intimate. 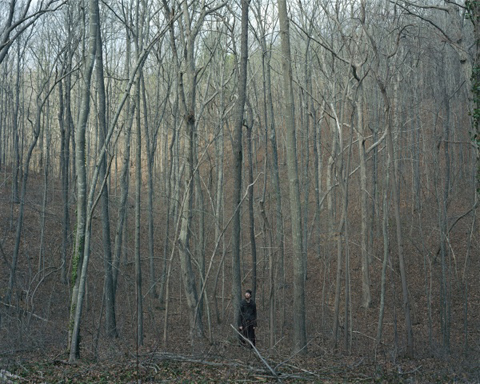 The key image of the series (not shown here) depicts a glowering man standing naked in a lush desert oasis, tan from the waist up and ghostly pale below, with a swastika tattoo visible on his bicep. He seems to be asking for nothing from anyone—but of course he is asking for something, and Soth gives it to him in this absorbing portrait that, as with the portraits in Mississippi and Niagara, accords the subject the respect of not pretending to understand who he is, or why he’s doing what he’s doing.

Other work in Broken Manual marks more of a departure from Soth’s recognizable style. Some photos are printed in small scale, and in black-and-white. One consists of a blown-up detail from a portrait taken at very long distance. There’s a sculture of a treehouse and cave, commissioned by Soth and executed by a sculptor who is not named. In an installation that will be unique to the Walker exhibit, Soth displays 300 copies of the book Broken Manual, each hidden in the hollow shell of a larger book. (For $600, you can have one of the copies shipped to you after the exhibit closes.) Notes, photos, and survival manuals litter the wall above the pile of books.

The book Broken Manual was co-authored with Morrison, an outsider who Soth met on one of his journeys. Morrison contributed text on how to survive off the grid, and Soth contributed photos. The title of the book—and of the larger body of work—refers to the fact that the guide, as Soth acknowledged Thursday morning, is not actually very useful. In that sense, it’s “broken,” like many things about and around these men. The oddness of an internationally-known artist collaborating with an unknown survivalist is what’s inspired the rumors that Morrison is a mythical alter ego for Soth. Morrison may be an alter ego of sorts, but he’s not a myth—he’s started creating photo collages, three of which are on display in the Soap Factory‘s biennial A Theory of Values—and Soth’s decision to work with him is typical of an artist who’s stretching himself more quickly than even his most devoted fans can keep up with. 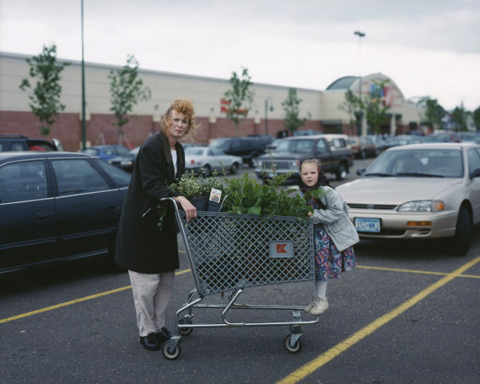 Possibly more revealing of Soth as an artist, though, was our visit to the “Minnesota room,” which I could imagine being dismissed as a mere bonbon for local audiences. Certainly it will be welcome to Minnesotan visitors, but the photographs there are among Soth’s very best, despite the fact that he told me at an earlier date that he struggles to photograph his home state, and doesn’t consider himself a great photographer of Minnesota. (I interviewed Soth for a profile that appears in the current issue of METRO.) On Thursday morning, Soth explained that he’s waiting for the right moment to undertake a major project in Minnesota, and that the frequency with which he’s been traveling lately has made his native state relatively stranger, and thus relatively more accessible to him as an artist.

So where some battle a fear of strangers, as an artist Soth seems to be battling a fear of the familiar. He noted that he’s never incorporated his family or friends into his work; whereas artists from Chuck Close to David Hockney to Sally Mann have found infinite depths in the intimately familiar, Soth has chosen to avoid that territory in his professional work as an artist. It’s a challenge, he said, that he’s interested in facing in the years to come—and fortunately for us, in a sense the 40-year-old Soth’s career is really just beginning.