For exactly four days (two of which have already passed), local arthounds have the opportunity to see Peter Eleey’s The Quick and the Dead, Robert Irwin’s Slant/Light/Volume, and Haegue Yang’s Integrity of the Insider simultaneously on display under one roof—if, that is, you count the entire Walker Art Center as “one roof.” To do so is an illuminating experience, literally and otherwise.

I took a one-hour parking space in front of the Walker on Friday, so the clock was ticking as I made for the Friedman Gallery to see Slant/Light/Volume. The piece, which was commissioned for the opening of the Walker’s old new space in 1971, is a sublime bit of minimalist folly. I use the term “folly” affectionately, but sincerely. The exhibit description on the Walker’s Web site explains that the piece, which consists of one translucent scrim displayed across the gallery at about a 45-degree forward angle, is “seemingly simple” but “philosophically rich.” Uh-huh. The Walker helpfully provides carpet squares (precisely cut and tastefully neutral in color, natch) upon which you could, if you desired, sit facing the scrim and contemplate the cosmos. In a blog entry, Julie Caniglia notes that the piece debuted not long after Woodstock, and hanging out in the Friedman Gallery for a couple of hours is probably the purest way to transport yourself back to the Age of Aquarius. It’s deep, man.

On my way upstairs to see the Yang installation, I swung through The Quick and the Dead one last time and was again impressed. I saw the exhibit for the first time at a press event guided by curator Eleey, with relatively quick stops at the highlights; and for the second time with friends, slowly meandering through. This time I almost ran through, and it occurred to me that it was appropriate to have seen the time-themed exhibit at three different speeds. Walking quickly through the exhibit, I forgot what to anticipate and was happily surprised at every turn. A silver skull! A turning tire! Scary sound! Dead dog! Dead bird! Melting ice! Breathing building! Fat-covered chair! When Luis Buñel’s life flashed in front of his eyes, that’s what it must have been like. 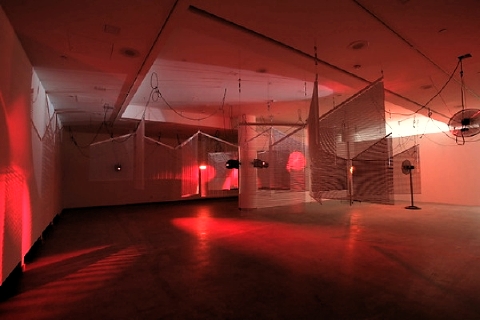 One of the things I love about The Quick and the Dead is that it’s accessible at all levels. People who have no experience with contemporary art might be enraged by the show or they might be intrigued, but they won’t be bored. That is not so much the case with at least of Yang’s small show in the Medtronic Gallery. The exhibit comes wrapped in a thick coat of verbiage emphasizing its political significance, but you’ll likely need to lean heavily on that verbiage to sort out the codes behind her washed-out handwritten notes, slides of twilit landscapes, and jumbo sun prints. In the exhibit notes, curator Doryun Chong writes that “Yang’s practice translates the landscape of her own emotional and intellectual life into a ‘democratic’ space of experience, a space generously open to viewers by way of sensory perceptions that almost anyone can experience.” That’s all too true; Yang’s work is so open to interpretation that one feels the artist is hiding in plain sight.

The exhibit’s marquee piece is Yearning Melancholy Red (2008), an installation that fills a room with right-angled assemblies of customized Venetian blinds lit by infrared heaters; the viewer is greeted by wind from two large electric fans. After Slant/Light/Volume, I felt as though I’d left church and entered a bordello. Hidden in a little space at the back of the room, though, is not a painted lady but rather a set of drums and a computer screen with controls that might have been connected to the lights and might have been connected to the drums. I spent a few minutes poring through the exhibit notes to see whether I was meant to use the supplied drumsticks to actually play the drums or not; finding no such indication, I gave up.

As I was leaving, a couple of women who looked like they might well spend their drive-times laughing along with Lori and Julia arrived in the room and I explained my dilemma. “Oh, go for it!” said one of them, grabbing the sticks and banging away. Maybe that’s my problem: Yang gave me an aesthetic democracy, but I was chary of casting my vote.