An important 2008 painting by Guillermo Kuitca embeds floor-plan elements in a cubist pastiche. Image credits below.

At the Thursday morning media preview for Guillermo Kuitca’s career retrospective Everything—which opens Saturday at the Walker Art Center—I asked the Argentinian painter to cite a reaction to his work that he’s found gratifying. He responded by saying that to him, the most important reactions are private moments that he’s not necessarily privy to. “Someone will come up to me and say, ‘I had a moment with your painting,’ and I’ll say, ‘Good. Don’t tell me about it.'”

In their comments at the event, Kuitca and Walker director Olga Viso—who helped initiate the traveling exhibit in her former position at the Hirshhorn Museum and is personally serving as supervising curator for its installation in Minneapolis—put that statement in context. With a few exceptions, Kuitca is not a painter who uses his work directly to tell you about himself: he very deliberately creates spaces for you to contemplate your own personal history.

Spaces are the dominant theme in Kuitca’s 30-year career (quick out of the gate, the artist is still only 49); specifically, spaces created by people. Recurring motifs include maps, floor plans, theaters, and beds—all, Kuitca and Viso both pointed out, platforms on which humans live their lives. Increasingly in the later works, these motifs are combined and layered: maps painted on beds, floor plans hovering hazily under maps.

Experimenting throughout his career with techniques including collage and laser printing, Kuitca renders his subjects with a distortion that gives them a surreal, sometimes shocking aspect. This is best seen in his large depictions of theaters’ seating plans. In Mozart-Da Ponte I, for example, the tiers of an opera house glower with a vivid red that bleeds into the spaces between them. 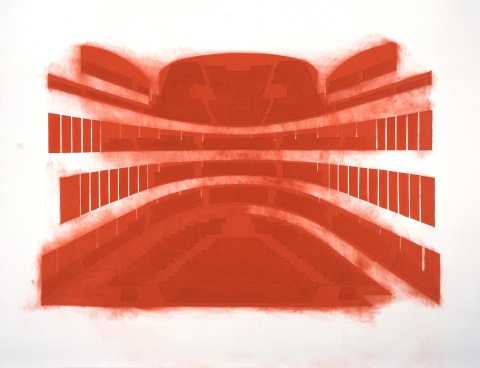 The artist hangs the giant pieces low, Viso pointed out, so that one feels one is standing on the stage, under the gaze of the unseen audience. That affords the viewer a close encounter with the work, but to fully appreciate a piece like Teatro Rojo, you may actually want to take a look at the reproductions in the exhibit’s catalog. In person, you can see the smeared glue of Kuitca’s collage work; in a small reproduction, the marks of the work’s creation are invisible, and one can appreciate the stunning sense of fragmentation the artist captures. On that scale, the floor plan simply seems to be blowing away, like dust.

In another beautiful and unsettling series, 32 Seating Plans (be sure not to miss it; in the installation, it’s tucked away in a side room by an elevator), Kuitca achieved melting effects by laser-printing seating plans on photo paper and subsequently dampening the paper. Viso pointed out that the series inspired the 2007-8 untitled painting in which a map seems to be chipped to pieces and scattered across a large canvas.

What will surely be the exhibit’s highlight for most visitors is a side-by-side installation of two untitled sculptural painted pieces from 1990 and 1992. The newer piece is an arrangement of child-size beds, painted with European maps (the buttons on the custom-made mattresses correspond to major cities) and stained a deep, inky black. The chilling piece would have fit well in the preceding Abstract Resistance exhibit, and would have been one of the best pieces there. 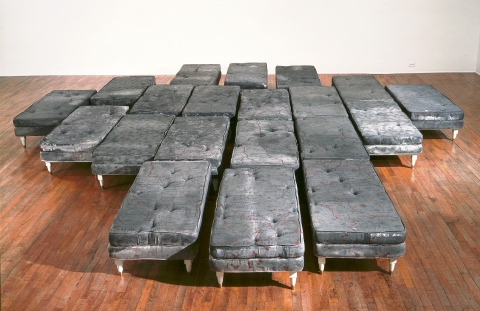 The 1990 piece is a triptych of large white mattresses painted with maps of the Midwest, with Minnesota front and center. It’s not in the show as a crowdpleaser for local audiences, though: it’s one of the most important pieces in the show, the geography chosen precisely because the painter had never been to the Midwest and did not expect to ever have much reason to. “I liked the idea of working with place names that had meaning to others,” he told us Thursday morning, “but not to me.” Spreading across the mattresses from the right (having worked in theater, Kuitca surely knows that it’s traditionally villains who enter from that direction) is a bloody red stain that might, to local eyes, evoke anything from the Dakota Conflict to the 35W bridge collapse. When he created the piece Kuitca didn’t know what the resonances to Midwesterners would be, but he knew they would be there. It’s your own moment to have with the work—not his.

Like a documentary that takes an unexpected and dramatic turn at the end, Everything concludes with a series of paintings Kutica sent to the 2007 Venice Biennale. After three decades rejecting, as Viso noted, virtually any explicit references to art history, Kuitca is now creating outright modern-art pastiches. Kuitca doesn’t simply replicate the masters’ work, though: he spreads Braquian cubes evenly across one canvas (Desenlace I) and scatters painted renditions of Fontana’s famous slash (as seen in Abstract Resistance) across another (Desenlace IV). As the artist himself pointed out Thursday morning, Kuitca is now taking abstract art itself as an imaginary landscape to reimagine and present to the viewer. The new work doesn’t yet have the power of his earlier masterpieces, but it’s an exciting and fertile new direction for an artist in his prime.

Everything is a rich and satisfying exhibit showcasing a remarkable collection of work by a restless iconoclast. It’s not a show with a lot of easy pleasures, but the more time and attention you give this powerful work, the greater the reward you’ll reap.