In exhibits opening to the public on Saturday—with a preview at Friday night’s After Hours party—the Walker Art Center is not just re-envisioning the way it presents work from its own collection, it’s offering provocative new ways of thinking about the display of contemporary art. Event Horizon is a roughly thematic multimedia overview filling three galleries, and Benches & Binoculars is a dense single-gallery presentation of several dozen paintings.

Event Horizon is enjoyable and interesting, but Benches & Binoculars is the real show-stealer. Installed in the tall yet cozy Perlman Gallery, the exhibit features paintings from the Walker’s collection (including, prominently, an oil portrait of founder T.B. Walker himself) hung salon-style, jammed up in close proximity to one another. One wall features predominantly figurative paintings, the opposing wall abstracts. The gallery is carpeted (!) in purple (!!) with matching couches designed by Andrew Blauvelt; per the exhibit’s title, binoculars are provided to peer at the higher pieces.

You’ve probably never seen contemporary painting treated like this. The norm at museums of modern art, as it is elsewhere at the Walker, is to give a painting—especially a painting by a towering artist like Chuck Close, Frank Stella, or Mark Rothko—a wide berth of white wall space. (At a Thursday morning media preview, curator Elizabeth Carpenter noted that the Walker bought the massive Close self-portrait for just $1,200—paid in installments.)

Seeing the work presented this way isn’t just novel, it’s tremendously illuminating. Not only do eras and artists get to intermingle, abstract art isn’t segregated from figurative art. In the windowless gallery, the eclectic warmth of the display feels like a giant hug by artists who typically are presented as ice cold. Too often, museums try to render art accessible by posting—unmissably, and distractingly, adjacent to the art—biographical text that’s supposed to make the artist someone you can relate to. Benches & Binoculars shows, in a manner that’s fun but doesn’t condescend to the work or to visitors, how the artists relate to each other. That’s much more meaningful than a cute story about, say, Franz Marc’s pet dogs. 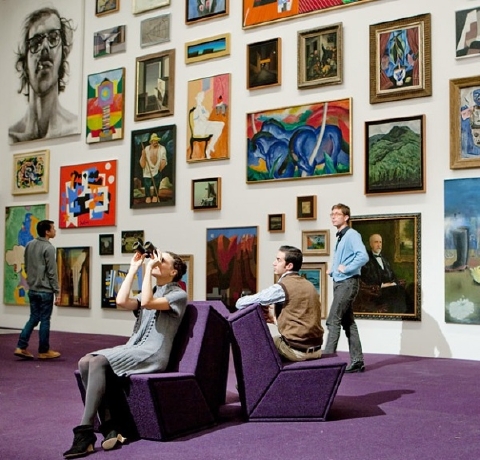 Though the display in Event Horizon—which fills the galleries quaintly designated simply 1, 2, and 3—is more conventional than the Benches & Binoculars display, Event Horizon is much more ambitious in its conception. Led by Darsie Alexander, the Walker’s curatorial staff have set out to represent the full breadth of the art center’s history and holdings—including its objects, but also including film, performance, and events.

That vision inspired the exhibit’s title, which refers simultaneously to events depicted in artworks, to the events of creation that gave birth to each piece, and to pieces that entirely comprise events. As curator of visual arts Peter Eleey demonstrated in The Quick and the Dead, questions of time and space are at the center of contemporary art, and Walker director Olga Viso has made clear her intention to erase the lines between object and event, between art and performance, between artists and audience. 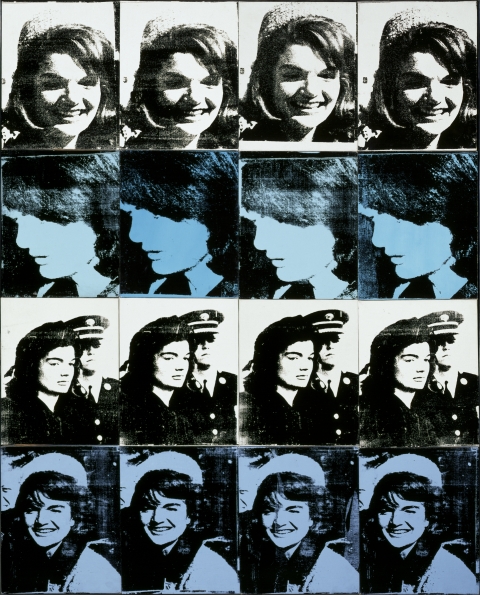 So while there are some remarkable static pieces in Event Horizon—standouts include Andy Warhol’s Sixteen Jackies, Andreas Gursky’s absorbing Klitschco, a Kara Walker quartet, and Trisha Donnelly’s Untitled (the twin sphinxes of which, positioned at a right angle in The Quick and the Dead, now sit conspiratorially abreast)—there are also video documents of live performance. Small rooms serve as intimate spaces to highlight a few special pieces, including Paul Chan’s moving (in both senses of the word) 6th Light and a typically eccentric film collage by Joseph Cornell—the first solo show by whom, Carpenter pointed out, was at the Walker in 1953. These pieces will rotate; I was pleased to receive Alexander’s assurance that Matthew Barney’s work is already on the schedule.

There’s a little curtained theater within Event Horizon; it will serve as a space for the projection of films (first up, Bruce Conner’s Crossroads) and, in the spirit of the Soap Factory’s Common Room, as a venue for various performances and events over the course of the exhibit’s three-year run. That’s a long haul in an art world where an increasing number of exhibits are very brief in duration, but the planned changes should reward frequent attenders. The exhibit’s catalog will be, cleverly, a literal card catalog with pockets that visitors can fill with souvenirs as they visit and revisit this rich collection.