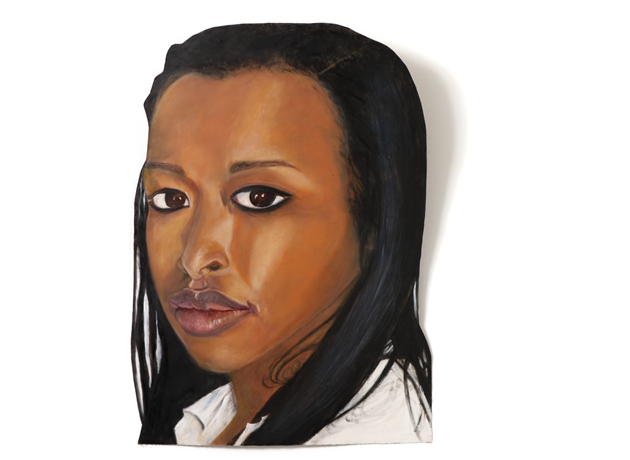 Above: LuLu I. Below: Border Crossing. Both images courtesy Vesna Kittelson.

Vesna Kittelson paints bright, bold, optimistic portraits that defy the traditional rules of portraiture, but despite the cheer in her paintings, she has insights into the dark side of human nature generally and the dark side of immigration in the United States more specifically. Her view of immigration is not only dark, though—it is also lively and cheerful, as one can see in her Young Americans series of paintings, which appropriately includes the confident faces of ethnicities from all over the world. Her work is on display at Form + Content gallery along with sculpture that, in contrast with the bright color of her images, expresses her vision of a chaotic world.

Vesna has her studio in the warehouse district of Minneapolis, but grew up in Split, Croatia, an ancient city on the Dalmation Coast that is the home of a splendorous Roman emperor’s palace. She says that she was unconsciously influenced by the art fragments all around her in her childhood. She loves the idea of fragments—as a girl she ate ice cream sitting on ancient Roman pillars, and through those pillars she felt she could enter another world—she sees her pieces as fragments that allow a viewer to enter their imagination.

In her spacious studio in a North Loop warehouse, Vesna spoke about her new work and its personal significance. She sees the world very differently from the young people that she paints. “Young Americans believe the negative aspect of the world is fixable,” she says, while she does not. Still, despite what one might call her pessimism, Vesna casts fresh light on the contemporary world by imagining how it looks through young peoples’ eyes, and by painting the eyes of young people.

Her portraits of young Americans hang on the wall, but in many other respects differ from traditional portraiture. They are not in frames, nor are they rectangular in shape, but are instead cut out according to the shape of each subject’s head. The colorful heads are mounted on the walls with the irregularity of people standing around a room, heightening the sensation that the faces in fact belong to individuals. “These are clusters of faces, not paintings next to each other,” Vesna says. Though they are painted on paper, by mounting them to stand off the wall a bit the portraits are given a three-dimensional element. They seem to observe the space in front of them, which includes both the installation and the spectators.

The portraits have an inspiringly positive tone, and the young Americans they portray are diverse. Some of their eyes are clear and open, though one pink-haired young woman, Christine, seems to be closing her eyes in a moment of laughter and delight. In a triptych of portraits called Kara, a young woman with short blond hair blows a bubble with her gum and plays with it. Says Vesna: “These young Americans think, ‘Why not have fun?’” 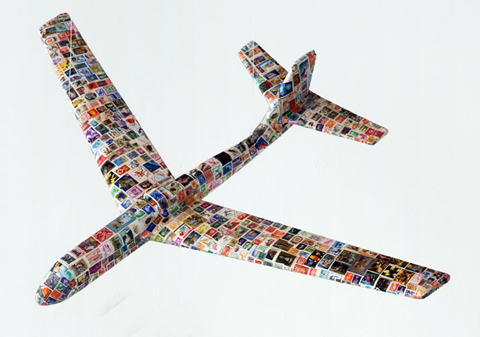 In contrast to the optimistic faces, the installation of sculpture mirrors the turmoil of our globalized world as Vesna sees it. The largest piece in the room, a Tower called Babel after the Old Testament story, looms above many foreign dictionaries encased in wax to symbolize the obsolescence of many of the world’s languages. A misshapen globe sits above the tower, reminding us that our failure to communicate has brought us within range of the destruction of our planet. An airplane covered in hundreds of foreign stamps, called Border Crossing, flies uncomfortably close to the tower, a reference to 9/11 and the fact that a tool for communication and travel, the airplane, has been used as a weapon. Finally, on the back wall of the gallery is an art cabinet that contains many expired passports and other immigration and nationality documents.

Vesna, who immigrated from Croatia while it was still the former Yugoslavia, spoke with me about the issue of immigration. She is interested in the problematic assumption of a second identity that’s created when one becomes a citizen of the United States and acquires a second passport, an interest that is made apparent by the title of her immigration cabinet piece, Twice Born. At the opening to the show, Vesna spoke about how on the one hand we don’t think much about what our passport says, and on a day to day basis it is not that important to us, but at the same time, when one is crossing a border, whatever that book says better match what’s in the computer, “otherwise you’re going off into a little room.”

As an immigrant Vesna feels safe in the United States, but she knows that immigrants can be targeted when a country goes through a difficult time. Her belief is justified, looking back at our not-so-distant past: among the immigration papers in the cabinet part of the installation is an identity card that was issued by the War Relocation Authority, a department of the government of the United States that was created to handle the internment of the Japanese during the Second World War.

Vesna’s images of young Americans make clear what we should have embraced a long time ago, but that still seems difficult to accept in some corners of our culture: that the face of young America is not Anglo-Saxon. The young Americans in Vesna’s show are Somali, Japanese, Croatian, and black, as well as blond and pink-haired. As the din about immigration reform continues in Washington DC, Vesna says the young people on the walls do not necessarily have any solutions, but that unlike the older generation who ask for repeated proof that our president was born in the United States, “the young people know that we’re all here together.”