In the light-filled Common Roots Cafe, specializing in organic food and fair trade coffee, adorning the walls are color photographs of people working: laying pipe for geothermal energy, making solar energy panels, setting up a wind turbine, and growing a green roof. The Green Jobs Photography Project was sponsored by the Blue-Green Alliance, a partnership between environmental groups and labor unions.

Photographer Joshua Low was inspired by the process of making his previous project Unseen America, a set of photographs that were displayed at the Department of Labor in Washington, DC.

“It showed immigrant workers and low-income service employees doing their jobs, showed their faces and humanized them. I realized that with the Green Economy, people were talking about green jobs, talking about building renewable, clean energy, but, we hadn’t seen the faces of the people doing those jobs,” Low told KFAI. “Installing wind turbines. Manufacturing hybrid buses in St. Cloud. Training to install solar panels, like they’re doing in St. Michael. Union members every day going out working to build the green economy. We wanted people to know these were regular people working to solve global warming.”

Erika Ritzel captures road-building with pervious concrete that lessens run-off of toxic chemicals into soils and groundwater. Her photographs of the process to create green roofs—gardens on top of buildings, which make them more energy-efficient—are perhaps the most artistic in the exhibit. Barb Kuiera photographed hybrid buses being built at the New Flyer.

There’s both hope and skepticism that the new green economy will take a big bite out of poverty.

“If we want that to be part of of it,we have to join together to make sure that we have the right policies and make sure employers pay decent wages,” Low says. “There’s a lot of hope for green jobs because they’re so much work to be done. If we are to get 20% of our energy from wind—which is doable with today’s technology—we need 150,000 2-megawatt wind turbines. Each one has 8,000 parts and weigh 400 tons. That’s a lot of parts that need to be made! Manufacturing jobs have been one of the best ways to move people into the middle class. The Twin Cities area is fourth in the nation for manufacturing. Unions are making economic justice part of their agenda.” 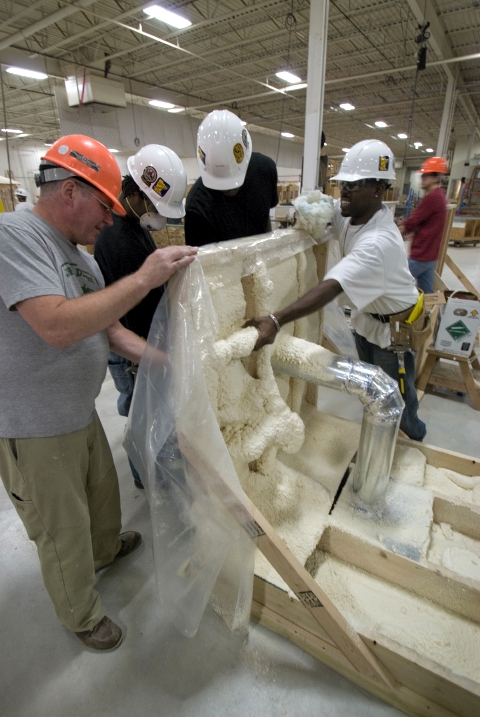 Representatives of the SEIU and the AFL-CIO spoke at the gallery opening. Low emphasizes that “the photographs highlight union workers because we want green jobs with family wages. While we solve environmental problems, we also create quality of life.”