A famous restaurant critic wanted to go out to dinner with some friends, including this reporter. We asked him where he would like to go. He said, “I would like to go to Travail. It is my favorite restaurant.” “But that restaurant is in Robbinsdale,” I objected, “and Robbinsdale is a suburb.” “Nevertheless, Robbinsdale is not all that far,” he countered. I then asked him if we should make reservations for our dinner at Travail. “No,” he answered. “They do not take reservations.” We went to Travail. 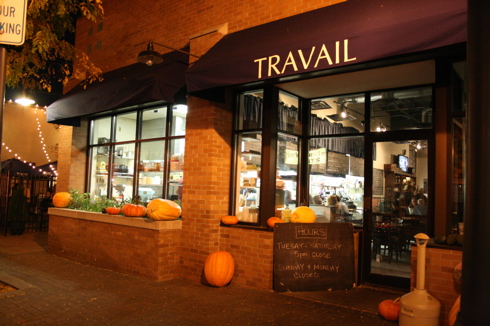 Many restaurant critics have reported on the excellence and award-winningness of this restaurant. On the strength of these accolades, I was eager to make the journey. My experience, however, was tempered by the following introduction: 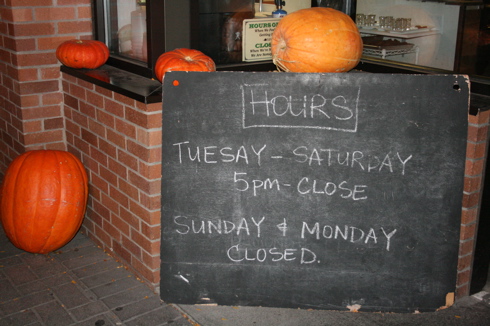 I don’t know what you call a typo in chalk; let’s call it a chalk-o. I felt peevish at seeing a chalk-o in front of an award-winning restaurant, and I was seized with the urge to swear. Upon entering the restaurant, we were greeted with a loud, irritating selection from the soundtrack to the movie Drive, which, I later learned, is a favorite of the staff. I was reminded of the opinion expressed in a widely-read tweet that “listening to the ‘Drive’ soundtrack actually makes you 40% cooler than you were before.” This also made me want to swear. “Shut the f**k up, Drive,” I said in my mind.

We stood at the door for awhile, listening to their ill-chosen dinner music, and eventually a server guy said something that we couldn’t hear, and eventually we made our way to the bar, where we shouted our name to get on the list for a table. Things began looking up when we got a hefty glass of wine at a decent price ($7 for the Petite Cassagne). We shouted conversationally and watched the people in the kitchen put dabs of molecular gastronomy on gigantic plates and carry them to the tables. 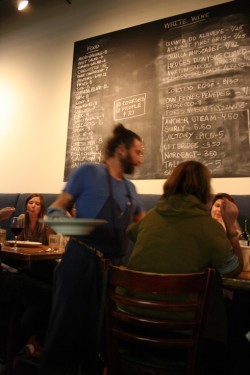 In case you don’t know the system here, it’s that the chefs are also the servers. The advantage is that they can accurately describe the interesting specks of food they’re serving you; the disadvantage is that they speak their internal culinary language so fluently that their descriptions sound like “ginger word word puree word word word pollen word word foie gras-infused cotton candy.” If you say, “Beg pardon?” it’s too late, they’re back in the kitchen. If you say, “What in the goddamn hell are you even f**king talking about?”, it doesn’t make any difference. No one can hear you.

Our group of friends shared dozens of miniature dishes (ten courses/two people/$70). Everything was great, whatever the freak it was. After awhile, I knew I must have consumed a lot of tiny food, because I was getting full. But I also had a sudden uprising of an un-gourmet-ish annoyance. “Just give me a f**king plate of actual food and let me chow the f**k down!” I exclaimed, but not aloud. 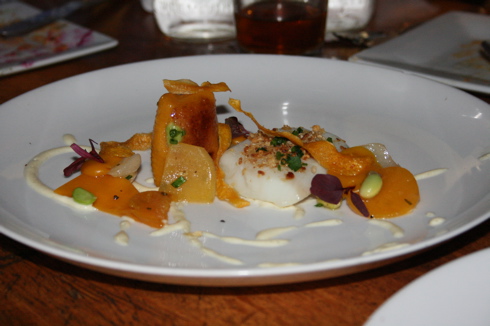 While I was struggling with my unfortunate personality traits, the famous restaurant critic led the chorus about the excellence of the meal, and we all chimed in. Every time the chef/servers tried to whisk away one of the oversized plates that had even the tiniest bite left on it, we all shouted, “Wait! We must consume that delicious morsel!” One of the universal favorites was the agnoletti, with little slices of carrot that made the restaurant critic sigh, “How can they make a slice of carrot so unbelievably delicious?” I wondered, alternatively, “What would it take to get a whole goddamn plate of carrots instead of one measly f**king slice?” 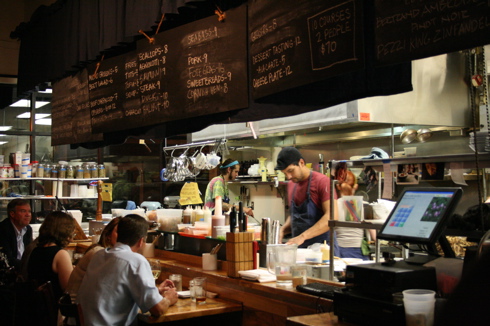 Yes, I understand that this is a trend, and it’s obviously a well-regarded one, and you will enjoy this restaurant, as long as they don’t misspell “Tuesday” on their outdoor sign and send you into a downward spiral of rage and pettiness. The next time I go, I’m going to stomp in there and holler, “Give me four plates of the goddamn tater tots and don’t tell me anything about the f**king truffle-infused ketchup! Don’t tell me a f**king thing.” 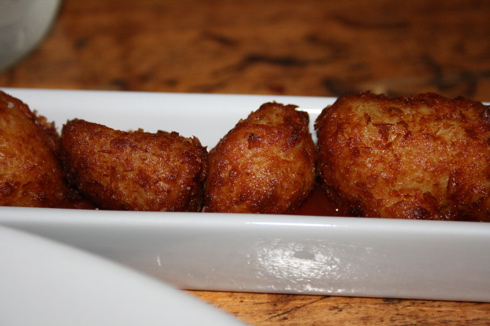 I was able to conceal this train of thought from the other guests. “How did you like your dinner?” I inquired of the famous restaurant critic, as we departed from Travail into the pleasant suburban night. “I liked it very much,” he replied. “I liked it very much as well,” I said agreeably.