Sometimes you meet people who are so virtuous and well-meaning that you just want to smack them upside the head. No, you don’t! What am I saying! It’s more like, you want to smack yourself when you’re reminded of the virtuous things people are doing while you’re sitting on your fat ass watching X-Files reruns. The do-gooder in question here is Bangladeshi immigrant and restaurateur Ruhel Islam, who runs a pretty little place called Gandhi Mahal at Lake and Minnehaha with his brother Jamil. 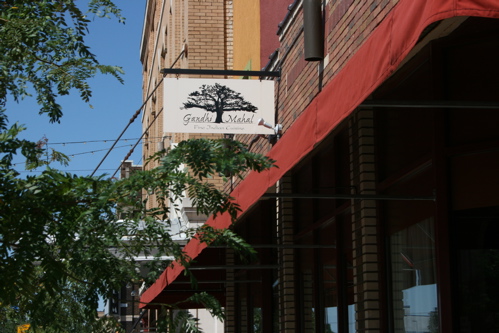 You’ve probably read about Ruhel Islam because of his election to the Lake Street Council board, his award as one of a select group of national entrepreneurs to participate in the Small Business Administration’s “Emerging 200 Initiative,” his contribution to the Page Scholarship fund, oh, and incidentally, his well-reviewed restaurant. 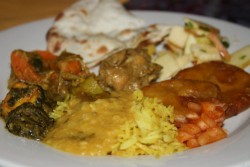 He’s expanded the restaurant to create a community center for neighborhood meetings and events. He’s growing organic produce both inside and outside the restaurant. He enthusiastically supports the local farmers’ market. Enough already.

Ruhel seems to be a textbook case of the old-fashioned, flag-waving immigrant success story: young man from impoverished country arrives in middle America and becomes an admired community leader. I interrogated him, politely, of course, to see whether he is what he seems to be, and guess what? It looks like he’s for real. 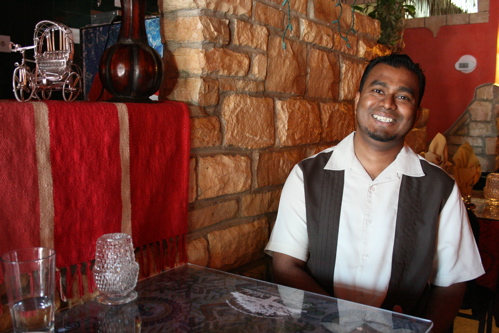 LL: What made you want to come to this country in the first place?

Ruhel: When I was a kid, I used to watch westerns on TV, and also I really liked The X-Files.

Ruhel: Yes! I learned from that show that in the United States, no matter what, everyone got justice. The A-Team, McGyver — every story ended with justice. So I wanted to come here.

Ruhel: We didn’t have a TV when I was little, and then someone brought one to our village. It was very exciting. We all crowded around to watch those shows. Now, of course, the village has TV, internet, everything.

LL: Where did you grow up?

Ruhel: My town is called Sylhet, in the northeast part of the country. That’s the tea district. Our family has some land, and we always farmed. We were completely self-sufficient. Everything we ate came from our land: fish, rice, vegetables, milk — everything except oil. That was the only thing we had to buy.

LL: Did you foresee a life in the restaurant business?

Ruhel: I used to watch my mom and grandma cook. They were wonderful cooks. I wanted to do what they did, and when I was old enough they let me make my own omelet. I put onion, green chili, cilantro, the green part of the onion, what do you call it, and tomato. Also, I loved dal. I still use my mom’s recipe that I learned when I was a kid. Another thing I liked to make was fish curry, from the fish I caught in the pond in our yard.

LL: What kind of fish?

Ruhel: I’m not sure what you call it here. The closest thing I’ve found is the butter fish I get at Coastal Seafoods. (Brief riff on how much he likes Coastal Seafoods, what good service, what fresh fish.)﻿ I was so happy when I found that fish here, because it reminds me of home. 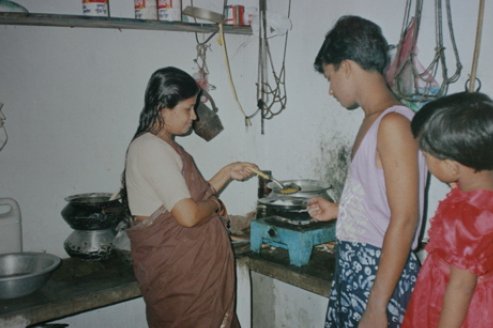 Ruhel’s mom, brother, and sister, circa 1992. The gas stove was a recent convenience; Ruhel learned to cook over a wood fire.

LL: So you liked to cook, but it takes more than that to succeed in the restaurant business.

Ruhel: I was always an entrepreneur. When I was about 10, I saved up and bought two chickens. To get the money, I collected supari nuts from trees and sold them to…whatever you call those people who go from house to house and buy stuff. We don’t have them here. (Ragpickers, maybe?) The hens laid eggs, sat on them, baby chickens hatched, and I had more and more chickens. I sold them, even to my mom. I wanted to be self-sufficient from a very early age. You know how many chickens I have now?

Ruhel: Two thousand. My sister lives on our family land and she takes care of them. 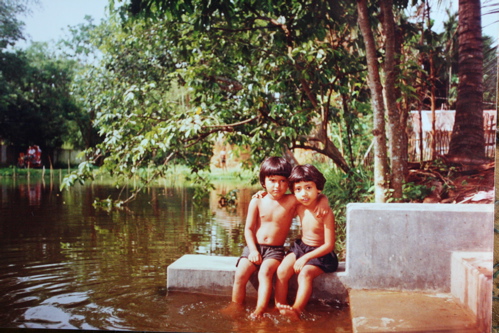 Cute li’l sis and cuz at the family pond, back in the day

LL: It sounds like a rather nice life. Why did you want to leave?

Ruhel: Oh, for my parents, for everyone, the goal is for their children to leave and make something of themselves in England or America. In Bangladesh, every year there’s another natural or political disaster. Floods, famine, military takeovers, strikes, and the political system is so corrupt. That’s why I liked those TV shows, where the bad guys are punished. I didn’t see that happening in my country. The bad guys get away with everything.

Also, my uncle was a big influence on me. He was the finance minister of Bangladesh for many years, named Saifur Rahman. He knew everybody, traveled everywhere. He was friends with the prime minister of India. He even met Gandhi.

Saifur Rahman at the UN 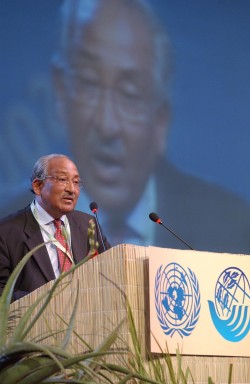 LL: Speaking of Gandhi, your menu says that your restaurant is “dedicated to the principles that Mohandas Gandhi advocated in his lifetime.” But wasn’t he this skinny guy who didn’t even eat?

Ruhel: Ha, that’s not the point. Yes, he was a vegetarian, and some people say, how can you serve meat in a restaurant dedicated to Gandhi? But I say, Gandhi’s purpose was to bring people together, and that’s what I want to do in my restaurant. I want no divisions between people! I want the vegetarians to be able to eat here along with the meat-eaters, the drinkers with the abstainers, the kosher with the un-kosher, the Republicans with the Democrats!

Ruhel: This is the time to invoke the words of Gandhi, for sure. Peace is a process, and even when people disagree, they need to sit together and talk. That’s why I want the restaurant to have something for everyone. We’re always taking suggestions from people about how we can accommodate everyone who wants to eat here. Like now we have gluten-free bread made with rice flour. If you think of something, please tell us. And that’s why we put the community center here, so people can come together and talk. 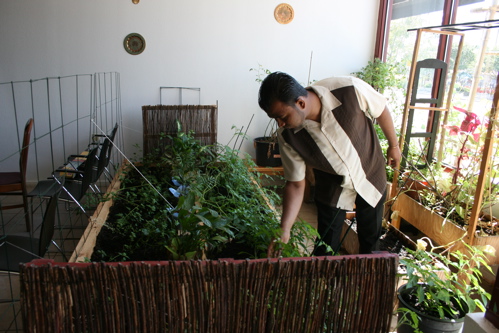 The little garden in the community center

LL: This dal is awesome, by the way. Can you share your family recipe?

Ruhel: Yes, it’s wonderful! All you need to do is place some oil in a pot, add some chopped garlic, onions, chopped tomatoes, turmeric powder. Soak some yellow lentils in water for a couple hours, then cook them with the onions and things. For garnish, in a separate frying pan, if you have no problem with ghee, add cumin to the ghee to create roasted cumin and place it over the dal and add cilantro. If you like it spicy, add roasted red chili peppers to the dal while you are roasting the cumin. Dal is very easy to make. 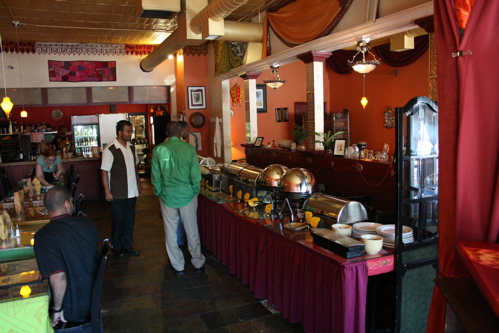 Ruhel: Well, my brother Jamil was already here, in New York. I went to New York before coming to Minneapolis. I was a busboy, waiter, food supervisor, cook. I learned that I could handle the floor and the kitchen both. I liked New York okay, except I got mugged. That wasn’t so good.

Ruhel: I was on the subway, going to Astoria, and these seven tall guys came up and started punching me. Other people saw and chased them away. After that, an American friend taught me how to look tough. I practiced walking like a tough guy. I was okay after that. 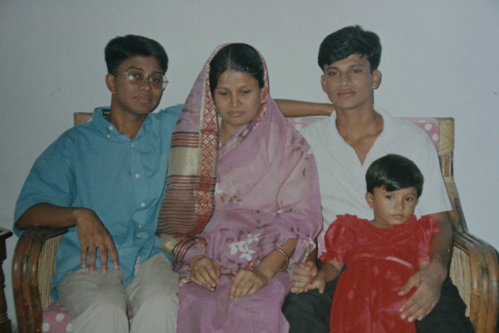 My brother came to Minneapolis in 1998 and I followed in 2000. He was a partner in Passage to India in Uptown and we started Little Taj Mahal in Dinkytown. From about 2001 to 2005, though, so many sad things happened. I went back and forth to Bangladesh a lot. My dad and mom both got sick and passed away, and my auntie too. My uncle, the finance minister I told you about, also got sick, so I was caring for him. We were very close. Did I mention that when I was about 14, he brought me to the capital, Dhaka, to go to school, because I was the smartest son?

LL: Can I just confirm that with your brother?

Ruhel: Well, that’s what they said, anyway. So I lived with my uncle and aunt in Dhaka for several years when I was in high school. My uncle died in a car accident in 2009, very terrible. At the funeral there were 50,000 people. I cooked for them.

LL: You did what?

Ruhel: Yes, for three days people were coming to pay respects. Everyone brought rice and there were wood fires everywhere for cooking. Hundreds of people helped cook, and I tried to use my management skills to supervise.

Ruhel: Of course, that’s different. But we started much smaller, just me and my brother and brother-in-law. Now we employ 20 people at this restaurant.

LL: Look, I gotta ask you something. You come from one of the poorest countries in the world. When people here envision Bangledesh, they think of the words “poor starving people.” How do you reconcile your life in the overfed USA with the place you grew up?

Ruhel: Oh, I think about this a lot. For my whole life I’ve tried to help people who were hungry or in trouble. I hate hunger! I hate to be hungry and I hate it when others are hungry! (LL’s note: It’s Ramadan while we’re having this discussion. I’m shoveling in the buffet like there’s no tomorrow; Ruhel is fasting. He says it doesn’t bother him. He’s in the restaurant business, for heaven’s sake.) Whenever there was a disaster in Bangladesh, like a flood, I would collect food and money from those who had it, and from my family, and distribute it to people who didn’t have any. 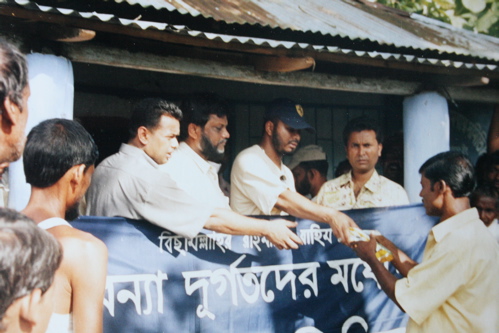 Ruhel (in hat) distributing food after a flood in the ’90s

It’s hard to see people waste food at the restaurant. It hurts my heart when people waste food. Sometimes we have customers who come from countries where people are starving, and they leave food on their plates, and I tell them, don’t do this!

LL: Your parents, God rest their souls, must have been very proud of you.

Ruhel: My mom prayed that I would be kind, have good intentions, and be honest. I try. 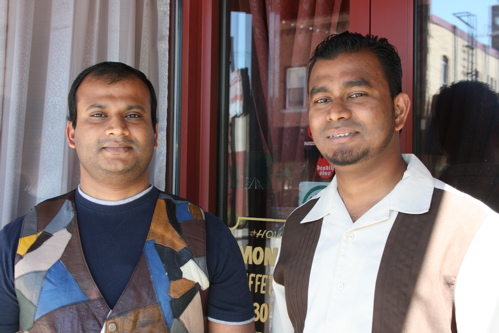 Jamil and Ruhel at Gandhi Mahal