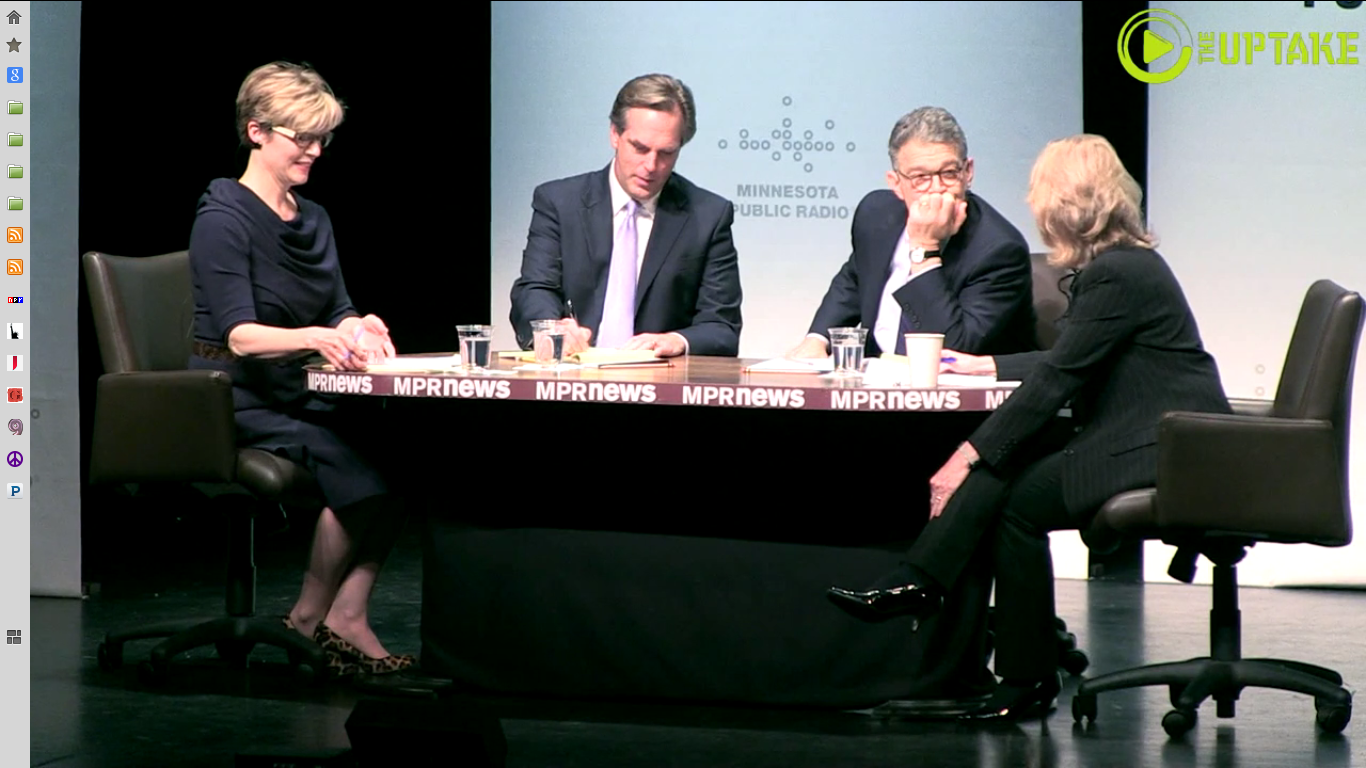 One moment that got a laugh from the audience was this exchange. McFadden was asking Franken a question and while trying to set up the question (about partisanship) he recalled that Franken had written a book called “Rush Limbaugh is a big fat liar”. Franken quickly corrected him and said no, the book was called “Rush Limbaugh is a big fat idiot and other observations”

Post-debate comments from the candidates

Senator Al Franken and Mike McFadden each held short separate meetings with reporters after the debate ended.
Here is a video of Al Franken’s post-debate comments:

Reporter: It’s the end of the race and you guys agree on everything now. What’s going on?

McFadden: There’s a lot we don’t agree on. Fundamentally we don’t agree on the direction of this country. I think the president’s not done a good job. I think Senator Franken has been a rubber stamp for this president and I believe this economy could be doing so much better. So, so I want to get an opportunity to go to Washington and implement my vision for this country.

Reporter: I think Senator Franken, we just asked him about it, he name dropped about a dozen Republicans Senators. Does that have any validity?

McFadden: Probably the same ones. I could probably repeat ‘em.

Reporter (laughs) Well does that hold any validity for you?

McFadden: No I don’t think it does. He’s been there for six years and he always talks about the same six – Roger Whittaker, Lamar Alexander , Deb Fischer… ah… he’s been there for six years and the facts are that over his first term he’s had zero pieces of legislation that he sponsored turn into law. Amy Klobuchar during her first term had seven pieces of legislation turn into law. Those are the facts. More facts: the other seven Senators, Democratic Senators, that were elected with Senator Franken in 2008, if you look in to it, he has sponsored the least amount of legislation of any of them. And there’s only one other Senator, Kay Hagen who I think is going to get beat in North Carolina, is the only other one to have zero pieces of their legislation turn into law. Every other Senator that was elected in his class has a better record.

Reporter: He was pretty adamant tonight that that’s not true. What’s the discrepancy here?

McFadden: Well, I, I, I based on, on the facts. He’s talking about things that he’s still working on that have not turned, that have not turned into law. I think a bigger issue is that he hasn’t been to 87 counties. He doesn’t do it every year. Amy Klobuchar, Senator Klobuchar sets the standard for work ethic in this state. And I can’t tell you the number of times people have complained to me that they have not seen Senator Franken, but they have seen Senator Klobuchar and I believe that Minnesota deserves two hard working Senators.

Reporter: If she were up this year instead of Senator Franken, would you have run?

McFadden: I, I don’t know. I mean ask me when she runs and I’ll give you an answer.

Reporter: You didn’t use the 97 percent number tonight. Why is that?

McFadden: What is that?

Reporter: You know, Amy Klobuchar is a Democrat who votes, you know, 96 percent of the time …

McFadden: No it’s not 96 percent of the time.

Reporter: 95? It’s in the high 90s. You know it’s by that standard. But so anyways the point is she’s got a D behind her name, what makes her so different? I mean she votes for all same judicial nominees. She votes for all the same pieces of budget (inaudible) as Franken does.

McFadden: She.. she’s … Amy Klobuchar voting record… ah when you look at the… go to open congress … and you look at the number of votes that she’s taken the Democratic Senate caucus and compare it to Al Franken he’s number one. He’s in a universe of one. He’s the most partisan Senator in the Democratic Senate. Amy Klobuchar was, ah… because she’s been able to reach across party lines, she in her first term had seven pieces of legislation turn into law. She’s effective. There’s a big contrast there. She works really hard and goes around this state, goes to all 87 counties. I think she sets the standard for work ethic. I, I can’t tell you the number of times that I’ve been told by people they just haven’t seen him.

Reporter: National Republican groups haven’t put the same type of money into this race that that they have into many other nations across the nation. Do you think that’s a sign that on the national level those organizations don’t believe that you can win on Tuesday?

Thank you I appreciate it.

Reporter: One last question on net neutrality. I asked you on Friday about it. Have you changed positions on that? Net neutrality? This is the first time I’ve heard you kind of say you support net neutrality where as on Friday you essentially dismissed it.

McFadden: I just… what I told you on Friday was that its an issue I have never been asked about on the trail. Not one time in 18 months. Net neutrality – we need to have certainty on the net. Business needs certainty. I support net neutrality. But when I’m going around this state Abby, and people are asking me questions they want to know about the economy, they want to know how get a better job , they want, they want to, they talk about security and safety. Those are the issues that I’ve been dealing with. So, ah hopefully that’s and answer to your question:

Uptake: Does that mean you oppose the FCC regulations?