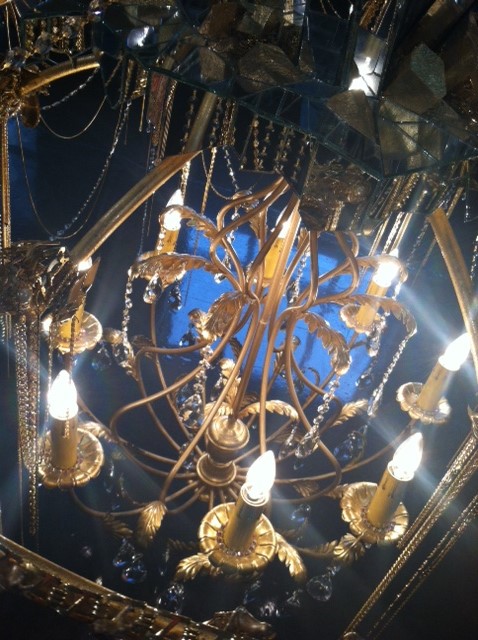 I love stories that place emphasis on heritage. Folk tales, mythology, old family stories, and anything that contributes to the long yarns connected to someone’s history; especially if there are visuals to go along with that. And if those visuals are sparkly, extremely detailed and thought-provoking, then all the better.

At the newly-opened Public Functionary gallery in Northeast Minneapolis, DZINE’s Victory is like a brilliant cluster of diamonds, captivating in its gaudiness and gleeful without forgetting its purpose—because the purpose is the foundation and its foundation is the story of an American heritage in a way that is most profound and personal.

DZINE’s work signifies, to me, the re-appropriation of culture that happens when someone immigrates to another country. You translate the aesthetics of your homeland’s culture into a new variation of itself using the aesthetics that your new home provides; creating a new visual language. This produces a heritage that combines the familiar with the recently discovered adding elements to both cultures.

The exhibition’s title Victory is pleasantly fitting as the concept of victory—represented by, among other elements, a giant wall of outsize trophies—fits very well into the context of immigration too. The American dream is considered the world’s ultimate victory as assimilation into American society signifies acceptance, achievement, and perseverance. It is a true victory to survive and attain greatness and status in a country that, in many ways, fights against your presence on its soil. The entire show is like a glistening trophy that shout out to the world “I’m here! I made it! This is my identity!” and it’s presented so extravagantly that it’s impossible to ignore.

All of DZINE’s inspiration is derived from his childhood; it’s rare among artists that this isn’t the case. I only mean that, as artists, we have a way of dragging the most beloved imagery from the past kicking and screaming into the present with the intent of showing the audience where we come from and how we got here. This is an element of heritage in which the past is redefined, reimagined and retold in the present so that we never have to forget where we come from; so that where we come from never becomes irrelevant.

The spirit of nostalgia is resonant throughout the work, and it feels strange to inhabit someone else’s remembrance. I used to feel like nostalgia was a mental disorder where, in sudden moments, your mind holds itself captive in the past. Now I see that it isn’t just a feeling but a way for your memory to take stock of its inventory; like flipping a light switch off and on to make sure everything is still in working order. Art can be that light that illuminates the room after the switch is flipped and I’m glad that DZINE’s Victory is Public Functionary turning their lights on for the first time.