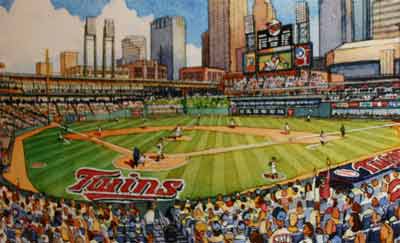 The crime is committed. In round figures, Hennepin County is on the hook for an average $1,000 per resident, and the Minnesota Twins are off the hook completely as soon as they sell the right to name a building they don’t own. One of them keeps the resulting revenue.

That the incipiently reelected governor of Minnesota would provide new moneys for no purpose but ballparks seems more easily explained as a cave to major league blackmail, a pill of political expediency, than a righteous invocation of executive judgment in the face of the dueling antinomies of Republican tax pledges and democratic honor. Win Twins.

There was a moment in the beginnning where a compromise rolled together appropriations for roads with inappropriations for sports facilities. Transportation flashed before our eyes and we could do something good with the money, for the legislature had enough dough to loaf. If the price of good was the acceptance of a gubernatorial fait accompli, then senatorial intervention had the chance to get a force at home, to wring a benefit for the half who knew the waste of bases-full highways. However, in the end, the conference committee held the runner at third.

Life in the Metrodome sometimes resembles a baseball game. The hell of sport there is an outer-ring damnation. The exquisite view of the outfield, the infield drawn in white, the Gitmo-ized volume of the intercom, a feeling that everything was painted over, a stand-in, made passable, dolled up, was all of a meal of sugar packets and watery soda.

Although it took a violation against the polity, the old war horse had to be put down.

Another course was once possible. Had the team acted on its own, they could have financed their own grass and mortar ten years ago on land provided by local government. The city would have helped out with infrastructure, and the Elysian Fields would have been a local feature in, say, 2001. For principal cost of $350 million, the banking family would have opened the new park and immediately begun to reap what they’d sown. Win Twins.

Revenue estimates are simply, well, estimates, but it’s safe to say that the baseball corporation would have realized more than $600 million for the last five years and already have broken even. By the time the County park is ready for business in 2010, the team has surrendered five years in the black for the privilege of chumping their neighbors.

Thus, at a cost of $225 million in lost opportunity, the bankers have been handed a coin worth a billion. The million-odd denizens betrayed by their commission are without recourse. The rest of the state rode herd over them, and the commissioners thanked them without asking for another. A reasonable person knows a benefit is not conferred for nothing, and the absence of the something on the public record reminds us that the dog who doesn’t bark may be the least understood. Four voters sold out a million, and that’s the best that can be said of them.