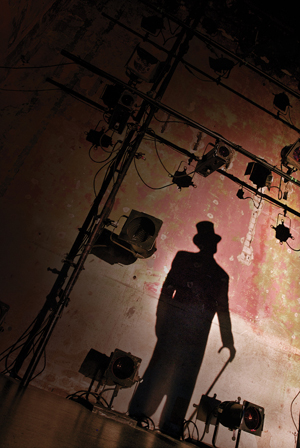 In celebration of the Southern Theater’s 100th birthday, Fools Productions presents The Vaudevillian, an homage to the vaudeville era into which the theater was born. With tap dancing, juggling, clowning, and other tricks, the ensemble of musicians and entertainers create a quaint night of fun, though the production drags at times and seems haphazardly assembled.

By far the best part of the evening was that of the musical group The Medicine Show, a trio of old-style musicians playing stand-up bass, banjo, and a bizarre contraption made up of a washboard, various horns, and a snare drum. The instrument, which could be made to sound like a train and a turn-of-the-century car, is played by the talented Scott Crosbie, a charismatic silver-haired tap-dancing musician extraordinaire with a handlebar mustache and a sheepish grin.

In a press release, Vaudevillian creator Lloyd Brant says the production is based partially on a description of the first vaudeville show that appeared at the Southern. In that show, there was a performer named Rose Monroe, who had the same first name as Lloyd Brant’s wife and collaborator Rosie Cole. Brant goes on to note that in his research he also found a description of a juggling show that Brant thought sounded like an act he used to do with his old partner Arsene Dupin. “I knew right then that my wife Rosie and Arsene and I had to recreate the very first vaudeville show that ever played the Southern Theater as the opening scene of the play,” Brandt says.

The clowning/juggling trio have some very entertaining moments—Dupin reminds me of a Bill Murray who can juggle and who doesn’t talk—but the narrative became repetitive, and I found myself getting anxious for the next juggling sequence or musical number.

A bit of historical background for the play is provided through a recorded voiceover by Kevin Kling. While I appreciated Kling’s personable narration, I would have preferred a live narrator to guide the audience through the show. As it was, the transitions were a bit rough, with uncomfortably long silences between scenes.

Apart from the unevenness of the production, there were some beautiful moments, especially due to a gorgeous lighting design by Jen Degolier, who has created compartmentalized squares of silhouetted images behind a scrim.

Less successful is Lindsay Woolward’s sound design. While I liked the concept of hearing voiceovers as I walked into the lobby, I unfortunately couldn’t hear what was being said and I thought the concept would have been better served if the volume had been turned up and if it had been more widespread throughout the building.

In the end, The Vaudevillian is a sweet little show honoring the Southern Theater’s history. It has some wonderful gems that are worth seeing, if you don’t mind waiting through the less entertaining bits. That’s show business!