Public Works Director Steve Kotke explained the recommendation to request bids for one of the orange bridge spans, with "add alternates" for preliminary work on the other, and for the second span.

Remember the Hollman decree? The 1995 court order that resulted in tearing down the Sumner-Olson “Projects,” dispersing the area’s economically poor residents throughout the Twin Cities, rebuilding with a community to house all income levels. There was one more thing expressed or implied: A Van White Boulevard bridge.

The bridge is not built yet-and its budget is now $5 million short of what the neighborhoods’ watchdog organization, Bassett Creek Valley Redevelopment Oversight Committee (ROC), says they were promised. “We might have found the money, had you just asked us,” they said (paraphrasing). The bridge, which provides an exit/entrance to I-394, is part of connecting the previously cut-off area to south Minneapolis and other parts of the metro.

It would exit I-394 over the BNSF rail line that runs parallel to 394, take cars, bikes and pedestrians over what is now the City’s Impound Lot, over Bassett Creek, to Second Avenue North. Not a bridge to no-where, but access to the neighborhood of International Market Square, Heritage Park, and various businesses along Second, the Farmers Market.

Plus, neighborhood activists and Ryan Construction have planned the area for development to bring needed services and jobs to the Bassett Creek Valley. Hennepin County Railroad Authority is also claiming part of the site for trackage and possible train storage relating to the Southwest Transit line; exactly which part is subject to change.

Ending the ROC meeting on March 15, Steve Kotke, the City’s Director of Public Works said “I do owe you an apology for not” getting the word to the committee earlier. “For me it was important to touch base with city council members first.” At that meeting, Kotke and others gave the background and their logic for continuing to bid out the project with a smaller-but-adaptable design, plus requests to price out other phasing. 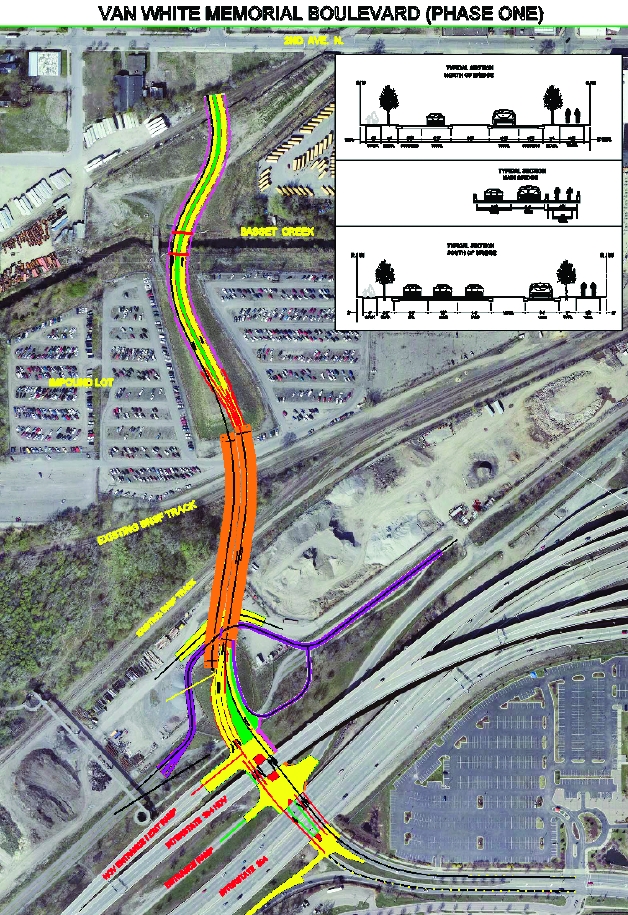 (Graphic from City of Minneapolis)

Essentially, they would ask for bids to build the roadway at full width, but then only build half of what would be a split bridge (each span would have carried one direction of traffic) plus the supports for the second side, and run all of the traffic over one span until need and/or money arise, and then build the second roadway span.

City engineering officials said it’s also possible that with the recession economy, contractors may be hungry enough that the projected gap will be smaller or that the entire project might be able to be built within the budget on hand.

In a followup email a few days after the meeting, Kotke wrote, “a coordination meeting was held with the agency partners of Minneapolis, Hennepin County and the State of Minnesota to finalize timelines. It was discovered that enough time has elapsed from when the initial key project documents were approved that an update and review will be required for the project memorandum and the final environmental impact documents.”

He brought this news to the Transportation and Public Works Council Committee which postponed their approval for the bidding. Kotke said, “This is a normal procedure for federal projects and we don’t anticipate any concerns with these reviews since the scope of work and footprints have not changed. However this new requirement will cause a delay in when we intended to advertise and seek bids. While a new schedule is in development, it is anticipated the soonest construction could start is late fall of 2011.”

At the ROC meeting, Brian Elliot, district director in Congressman Keith Ellison’s office, said there is a real risk, with the new political leadership in Washington, that any unspent appropriated federal dollars, even dollars that are contracted, will be lost. That, and the ban on earmarks, may make it difficult to get money again. Some of the money in this project comes from the state, some from the feds, and Kotke said the state has said “spend the money or it’s at risk.” He said the project must at least get started in 2011.

Vida Ditter of Bryn Mawr, who also cooked up a sumptuous feast for the participants, said “you slow down potential development in the area” by a perception of small size to the bridge. “We wanted to build as big as we can.”

Maren McDonell, president of Harrison Neighborhood Association, said it’s not what the spirit of the decree says, “We’re going to connect you, but our way. The $5 million isn’t what the community lost. South Minneapolis has bridges every 5-6 blocks. This is crazy, it continuously happens in this neighborhood. We’re going to be cut off again. The city keeps promising.”

Don Ostenson, chair of the ROC and a member from Harrison, said “the original idea of that capacity was to attract major tenants. The idea is to bring the maximum capacity to that area.” Another participant said as a property broker it is easier for him “to sell to people if the capacity is there.”

Jack Yuzna, an engineer for the City of Minneapolis, told the group any project that involves federal funds has to assess future demand, with a 25-year projection. “Working with Ryan’s information, we projected, modeling with a consulting engineer, and estimated that there will be 8,600 to 8,700 vehicles per day on that bridge in 25 years.” The double span bridge would accommodate 15,000 vehicles per day.

The delay Kotke discovered gives ROC members a bit more time to do, as Pat Carney, a Harrison business owner, suggested, beat the bushes to find the difference. Harrison staff members mentioned some recent grants relating to light rail and community engagement. And Darrell Washington from city staff said part of his previous job was to raise money, $20 to $40 million for Heritage Park.

Bridge plans call for a post tension box girder design, not unlike the replacement 35W bridge.