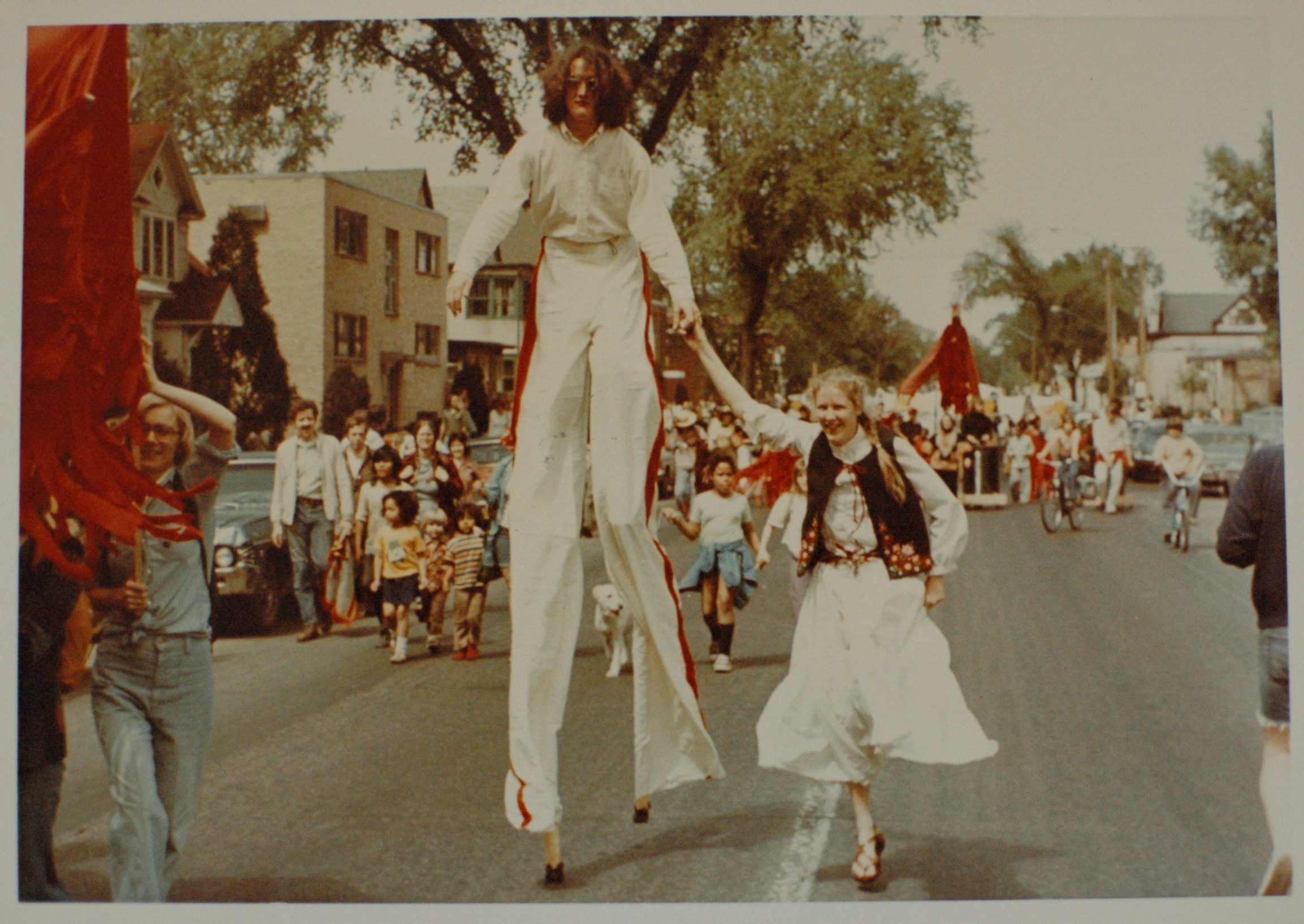 It was the spring of 1975. The Powderhorn Puppet Theatre (now In the Heart of the Beast Puppet and Mask Theatre), in the spirit of an anti-Vietnam energy that permeated South Minneapolis in the early 1970s, planned a MayDay Festival, which was to bring people together in defiance of the war by building a healthy community. Two weeks before the parade was to take place, the war ended, and the members of the puppet troupe looked around at each other and asked, “Should we still do this?” And the answer was yes.

In two years, MayDay will be 40 years old, and the MayDay of today is a far cry from that first ragtag group of hippies — about 50-60 people in total — who carried an Earth puppet, a Water puppet, several birds, two accordions and banners, and raised the Maypole puppet in Powderhorn Park. Last spring I visited MayDay and the large park was a sea of people and vendors, performers of all ages and ethnicities, and not an open signpost or bike rack space to be seen, as they were all taken up by bikes (not to mention all the parking spots). Further, MayDay has become a required pit stop for any local politician running for office, perhaps in contrast with its fringe roots.

Still, the spirit of that first MayDay pervades — of building community, of lifting the spirit of participants and audience alike through imagery, music and a sense of ritual. In growing larger, MayDay has not lost its spirit, but rather carried a larger group of people each year on its journey. Today, MayDay IS Minneapolis. It represents everything that is good about this city — our capacity for collaboration, community-based art, liberal values and hope.

No doubt many of you saw the piece by Sandy Spieler, HOBT’s Artistic Director, published first in the Alley and reprinted here at TC Daily Planet, about a rather dire situation surrounding HOBT’s MayDay parade. Spieler writes that the organization’s cannot support putting on MayDay as it has in the past, deciding to reduce the budget by 33 percent from previous years.

While reducing MayDay’s budget points to the nimbleness of the organization (they have done what they have needed to in the past to get through tough economic times, including laying off all staff a few years ago after the economic collapse of 2008), the news also reveals just how fragile our arts infrastructure is in Minneapolis. MayDay receives no support from the City of Minneapolis (and instead pays for police services, street permits and expenses) nor from the park board (instead paying $4,500 for the park and $2,000 for security).

Now, I know cities across the country are strapped for cash, and this is not to say that HOBT doesn’t get any public money (they do, from the Minnesota State Arts Board, for example.) But clearly there is still a gap. Here’s the question- do we want to lose what makes this city a wonderful place to live? Or is part of the reason we live here because of all the rich cultural tapestry that makes Minneapolis great? Especially when we look at how much we shell out to corporations (take a look at the New York Times map for Minnesota about incentives given to companies)

In my research on Minnesota theaters in the 1960s and 70s, one thing I noticed was just how much funding was available to the arts. “Government funding was a-flowing,” said Rick Thompson in my interview with him, and indeed there were a plethora of both private and public sources of funding that allowed many theater companies to form during that period. Many of those companies have thrived and become part of the fabric of our culture, and yet in some cases they hang on by just the threads.

When I was working on that project, I had the opportunity to interview Spieler, and she was generous enough to allow me to spend some time in HOBT’s archives, a rich resource of the time period. (Here’s the page I created for HOBT, which has some of my findings) . What is remarkable is how In the Heart of the Beast embraced this idea of a community-based art practice, which today is touted as some kind of new thing in the form of “place-making”. HOBT’s founders aimed to create a kind of political theater not through banging their message over people’s heads, but through the creation of beauty and hope and bringing people together.

Like much of the art at that time, HOBT intersected numerous issues and art forms, feminism, the environment, American Indian issues, etc, through music, puppetry, spectacle and theater. The need for that kind of bridge-making has not diminished, but rather increased, and HOBT still serves the greater community by bringing many stripes together.

So what needs to be done? I’m tired of writing about arts organizations on the brink. We need to figure out, as a society, how to keep the resources and institutions that hold us together.