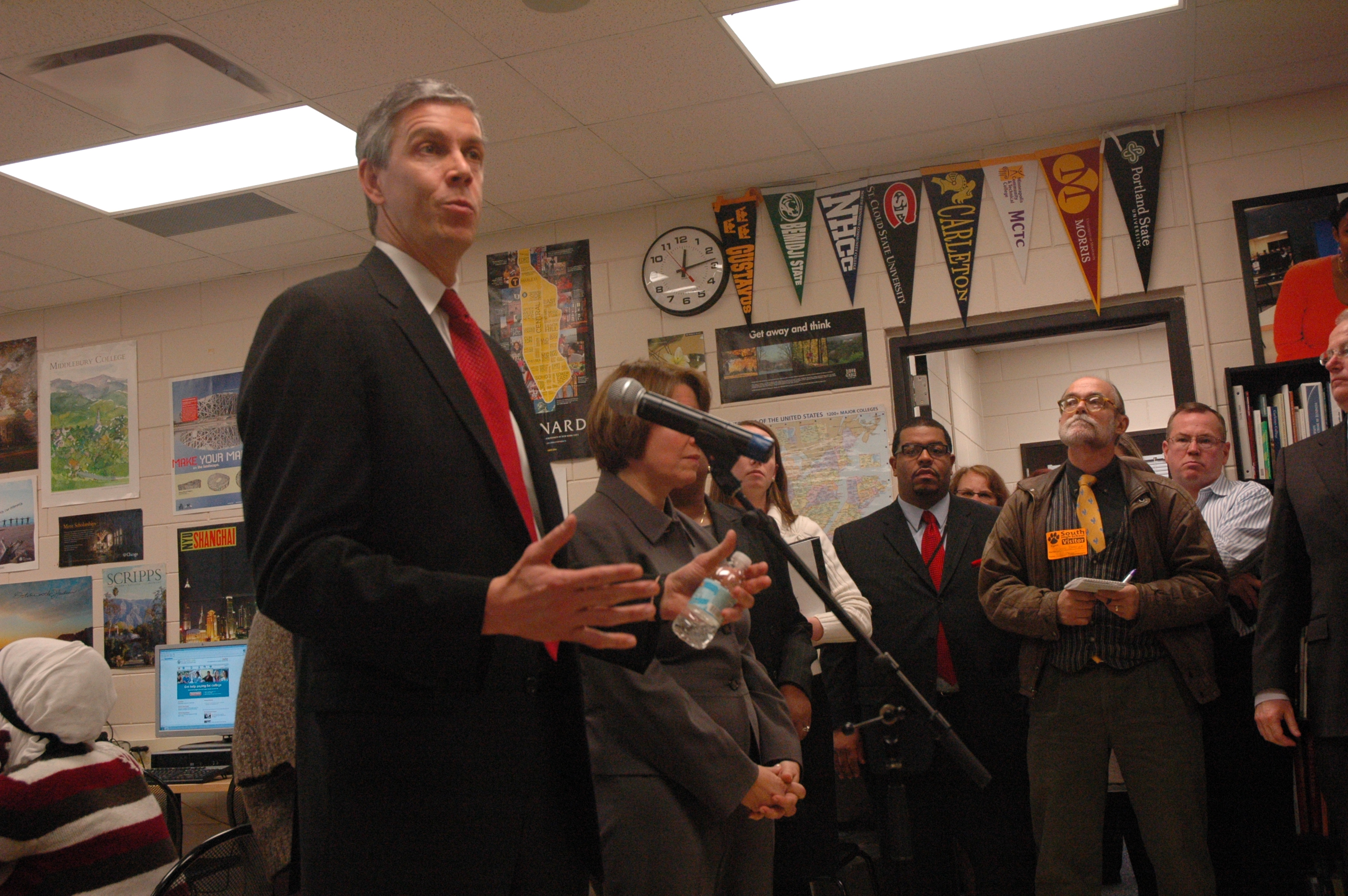 According to Johnson, 78 percent of students graduated from Minneapolis Public Schools, and 85 percent said they wanted to go to college, but only half of the students — about 700 — applied for FAFSA. This year, she said she hoped to connect to students and parents through “FAFSA February” encouraging parents to fill out FAFSA and income tax forms at the same time. 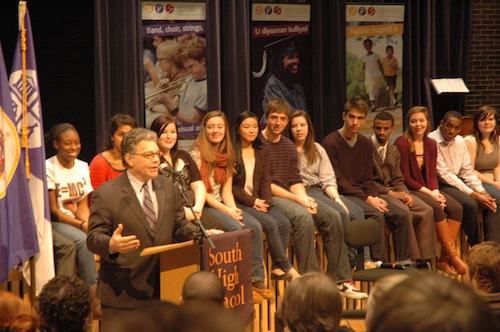 Senator Al Franken told students, “It’s all up to you.” Unlike some countries, including Scandinavian countries, where college is free or where people get paid to go, the United States is seeing rising higher education costs, and declining federal aid. “The pressure has fallen on you and your families,” he said. “You have to be smart about accessing aid.”

Arne Duncan thanked both of the senators for their fight for the American Opportunity Tax Credit, which helps families with college tuition expenses by giving the chance to claim $2,500 each year for up to four years per student.

The credit initially was part of the American Recovery and Reinvestment Act and was extended through 2012 as part of the Tax Relief, Unemployment Reauthorization and Job Creation Act of 2010, according to the Department of Education blog.

Duncan also spoke of the Income Based Repayment program, indexes student loan payments by how much you make, and the public service loan forgiveness program, which forgives loans over 10 years if people choose to work for the public sector.

Federal aid for education has been a “personal battle for the president,” according to Duncan. Obama himself did not come from a wealthy family, and the president and Michelle Obama, had $120,000 in combined debt from college and law school.

“It all starts with FAFSA,” Duncan said. Even for young people who get great grades, FAFSA can be a huge barrier. The Department of Education, in partnership with the IRS, has simplified the form this year, and taken out 30 percent of the questions, he said.

In a question and answer session, a student named Clara asked if Obama were to be re-elected, and Duncan stayed on, what he would see as the priorities in the second term. Duncan replied that even before that, he would continue to see early childhood grants as a major step to get the United States back on track, and leading the world in graduation rates.

In addition, a big priority would be to bring in the next generation of great teachers. In the next 4-6 years, a million and a half teachers will retire, he said.

Duncan then stressed the importance of community colleges, which he called an “unpolished gem”, that in some cases are free with Pell grants. College shouldn’t be something just for middle class folks or rich people, he said.

When asked by another student about pressure to cut education spending, Duncan replied that he didn’t believe education should be considered to be an expense but an investment, adding, “You guys as voters need to decide its value.”

Another student asked what Duncan had to say about immigrant students going to college. “The Dream Act has to pass,” Duncan said. “We haven’t been successful yet, but we can’t afford to leave talent on the sidelines.”

One mother asked Duncan if the availability of student loans has increased the cost of tuition at colleges and universities, to which Duncan replied that no, Pell grants do not correlate with tuition increases. He said recent cuts in state funding have been tough on colleges, but that it wasn’t about pointing fingers or laying blame.

A student named Taylor asked about classes such as orchestra, choir and ceramics, that don’t get tested and are the first to get cut. Duncan said that those classes “keep you in school. When we cut those things, we do a disservice.

Another student asked why schools in richer areas such as Edina and Wayzata had better schools than those in poorer neighborhoods. “So much of education is funded at the local level through property taxes,” Duncan said. He agreed that it wasn’t fair, and said that even though the United States spends more per pupil than other countries, our inequities are the highest.

Duncan said he was impressed by all of the intelligent questions by the students.