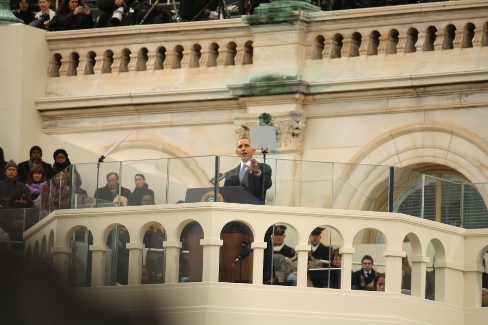 Barack Obama, who became the third consecutive U.S. president to deliver a second Inauguration Address, told the nation Tuesday that it is up to all of us to “act in our time” to move this country forward.

“We cannot afford delay and substitute spectacle for politics, and use name calling as reasonable debate,” he said during his nearly 15-minute “mini” address. America must be the leader for a peaceful world “from Africa to Asia…and in the Middle East,” pledged the president.

After paying homage to “the forbearers, and all those men and women, sung and unsung,” President Obama declared, “It is now our generation’s task to carry on where those pioneers began.”

Obama, who was officially sworn in January 20 as constitutionally required, strongly urged that equality — especially in income, employment, and acceptance of all people regardless of race, gender and sexual orientation — should exist in all facets of American life. He warned against voter suppression and briefly touched upon immigration reform and climate change. He also predicted that “hard choices” must be made to ensure that health care, Social Security, Medicare and Medicaid are kept intact.

“These things do not sap our nation — they strengthen us,” said the President.

“Our journey is not complete until all our children in the streets of Detroit and from the hills of Appalachia to Newtown are cared for and safe from harm,” continued Obama. “That is our generation’s task, to make these rights, these values of life, liberty and the pursuit of happiness, be real for every American.”

George Thompson, who was born in Rochester, Minnesota and now lives in Los Angeles, said that Obama “laid out an agenda” for America to follow.

Actor-comedian Marlon Wayans told the MSR afterwards, “[The speech] encapsulated everything we needed to be as a people. I love when he talked about equality, [but] he can’t do it alone.”

“I thought it was fitting for our president to talk about the moment of history and what this day means,” added Minnesota State Senator Bobby Champion on the inauguration, which was held on the Dr. Martin Luther King, Jr. Holiday. He said that Obama’s speech “absolutely met my expectations. The president has a way of putting words together and capturing the moment… He is also forcing us to think about our obligation as citizens — not only what he is going to do, but we also, what we are going to do. I loved the recurring theme of ‘We the people,’ because that says what we are as a country.”

Nearly two million people attended the 2009 inauguration of America’s first Black president, and some had predicted that the crowds at this year’s event would not duplicate those numbers. However, not an empty patch of land could be found as a great multitude of people again blanketed the U.S. Capitol grounds, where the inauguration was staged.

As in 2009, the blocks that make up the National Mall were jammed with folk, and crowds lined the blocked-off parade route along Pennsylvania and Constitution avenues. The countless vendors again hawked anything and everything with Obama on it.

“[President] Obama actually is our second Black president,” proclaimed Staci Reed, who works with students at Cass Tech High School in Detroit, of his reelection. She helped with her school’s 60-student group that participated in one of several pre-inauguration events that were held last weekend. “We are all glad and proud to be here.”

Spelman College junior and Minneapolis native Taylor Ratliff served as the tour manager for her school’s glee club, which performed at the inauguration’s MLK ceremony. Although she attended the 2009 inauguration as a high schooler, “This time I have a greater appreciation for the leadership of our country,” said Ratliff, a biochemistry major. “I have an appreciation overall for where I am as a college student, learning to take chances, and I need to take risks and speak out for my community. I feel it is my duty.”

Darrell Solomon, who helped raise funds for Education Without Walls, a Cleveland, Ohio group that works with youth by selling Obama memorabilia, compared both inaugurations. “It appears to me…that the energy is a little different,” he noted. “In ’09 the energy was a little more hyped up, a lot more noise, a lot more interactive. The momentum of people coming from different states and from all over the world was high. This time around…everybody is a little comfortable, and it was a little more laid back.”

“For this man to be given a second term, I think it is tremendous,” said actress Lynn Whitfield of President Obama (who is only the 17th U.S. president to win reelection).

For actor Nick Cannon, attending this year’s inauguration “is just as exciting” as the one he experienced four years ago. “We get to keep the same administration…and allow the president to finish the job he started.”

Atlanta Daily World reporter Kenya King, who along with the MSR joined for the second time the local, national and international media on hand to cover the Obama inauguration, said it is only fitting that the Black Press be on hand to report these two historic events.

Fourth-grader Colleen Temple, age 10, of Baton Rouge, Louisiana got the thrill of her short lifetime: She told us that along with being interviewed by CNN, “I got to hug the president, and the first lady also kissed me at the Red, White and Blue Ball. It was really amazing, and I can’t believe that that happened to me,” said a smiling Temple.

“I’m really proud,” added her father, Collis Temple. “She’s been saying for a long time that she wants to be President of the United States.”

“Now, more than ever,” concluded President Obama in his Inauguration Address, “we must do these things together as one nation, one people.”