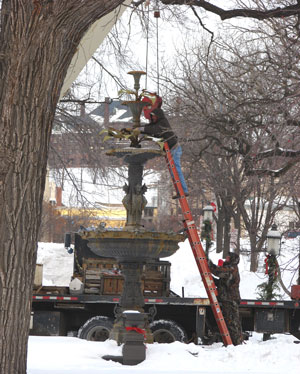 Workers started removing the fountain in Irvine Park, Saint Paul, earlier this month. It is being shipped off to Robinson Iron Works in Alabama, where it was made, for a general refurbishment that they hope to have done by May.

This tiny tidbit of very local news may not seem important to the rest of the world, but the story of the little neighborhood of Irvine Park is rarely told the way it needs to be. It’s just one story of urban activism among thousands, but it is important because this is repeated constantly throughout the world. The lesson is simple — if you want the really good things in life you have to make it happen.

The fountain itself is not in good shape. It was hit by a car at very high speed on 12 November and the base was heavily damaged. Irvine Park is a square that interrupts Ryan Avenue and Walnut Street in Saint Paul and periodically people do not understand that these do not go through. The fountain has been hit at least four times that I know of by people attempting to drive through, usually drunk.

The neighborhood is as old as the city, laid out as part of Rice and Irvine’s Addition to Saint Paul in 1849. That added to the city Rice Park, Irvine Park, and everything between — including Seven Corners and the Xcel Energy Center. Rice Park was heavily developed and promoted by Henry Rice as his gift to the city, but Irvine Park remained more of a grazing land for animals.  It wasn’t until 1881 that a fountain was added in the middle. The great oaks that stretch over the park testify that they put in their roots at the same time.

Saint Paul was a very small town, and the wealthier residents who built the larger houses of the neighborhood were always up against the nearby docks at Chestnut Street — and the accompanying whorehouses and dirt that defines docklands everywhere. It didn’t seem to make sense, and the neighborhood started to decline slowly, especially after the Depression of 1893.

Cass Gilbert was the first to try to do something about the decline, outlining a grand plan for a wide boulevard straight south from his new State Capitol Building in 1905. The plan hangs in the Saint Paul Mayor’s office to this day. This street would have cut right through Irvine Park and placed a big obelisk exactly one mile south of the capitol where the street became a bridge over the Mississippi. That obelisk would have been centered where I am sitting right now, in the kitchen of the Spencer House. I like to say that my house is the oldest one in the city to have been threatened by a city master plan — and note that it is still here.

But it was not to be. Smith Avenue on the West Side does point straight North to the Capitol with a magnificent view, but the High Bridge veers off to cross the Mississippi at a more cost-effective angle. Though Irvine Park was saved for now, the decline continued.

The original fountain was sold off as part of a scrap drive for World War I.

By 1978, the city had enough. The big old houses had become flophouses for the homeless and down on their luck and the area was clearly the most dangerous in the city. They intended to bulldoze it all and put in low-income housing next to some industrial lands.

Neighbors were horrified and quickly moved to save what was left. They convinced the city to help “urban pioneers” buy all the houses they could and support a general renovation. Reluctantly, the city did, and after moving several houses around to make room for a new development, a pattern duplicated successfully many times since, the neighborhood started to come back. Irvine Park became the first Historic District in Minnesota.

When the city asked around about a replacement fountain in 1978 they had a photo of the old one, 60 years gone. Robinson Iron Works replied that it was clearly one of theirs in the first place — and they still had the old molds. The new fountain, an exact duplicate by the same company, was installed just under a century after the first one.

That was not the end of struggles for the neighborhood tucked next to Downtown. In 1988 Saint Paul was finishing up plans to build an overpass above the railroad tracks to link Shepard Road to Downtown without interference from trains. The plan was to route tens of thousands of cars each day past the neighborhood. Residents banded together and, led by Maggie McQuillan Schwichtenberg were able to learn the arcane Environmental Impact Statement (EIS) process well enough to stop the project.

The Science Museum of Minnesota could not have been built as it is now if this had not been done. That land was nearly nothing more than an overpass.

Very few people know how much hard work and dedication it takes to make an urban neighborhood into a good place to live. The weddings come through, sometimes as many as five a weekend in the summer. Few understand the dedication and love it took to make it what it is.

Today, the fountain is leaving because it was hit by a drunk and terribly in need of repair. It is, without any doubt, the center of our community that defines who we are. It is very sad to see it go but it needs help — just as the neighborhood has several times.

Urban neighborhoods do not simply happen — they are carefully crafted and protected. It takes dedication and a little help from the outside, but mostly it takes people who make the community their own. Urban removal projects full of new and bright ideas for great big things are never a substitute — they are usually little more than a threat as dangerous as a drunk driver lost in a neighborhood they do not know.

Thank you for indulging me this post on what feels like a terrible day. Follow the links for more stories about what this neighborhood means and what it took to make it what it is. I’d appreciate your own urban renewal stories, too!