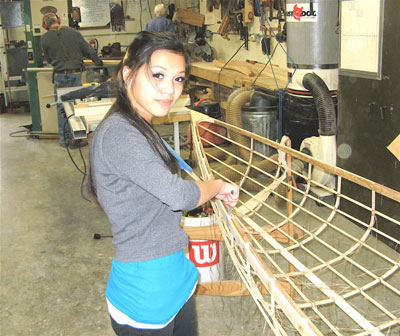 Stephanie Yang wants to own her own business and says her experience at Urban Boatbuilders is helping her prepare for that. (Park Bugle photos by Roger Bergerson)

A boat can take you places—in more ways than one—as a St. Paul organization has been proving for the better part of 20 years.

Urban Boatbuilders partners with Twin Cities youth organizations to teach 13-to-16-year-old students how to build boats. Its apprenticeships are for young people ages 14 to 18, who are paid a stipend to build boats at the Urban Boatbuilders workshop on Pascal Street, just south of University Avenue in the Midway District of St. Paul.

It’s mainly inner-city youth from St. Paul who are involved in the apprentice program, most of them young men who have spent time at Boys Totem Town, a Ramsey County juvenile correctional facility.

“Some of them have made choices in the past that have been risky and exciting,” said Phil Winger, an instructor at Urban Boatbuilders. “Most of them have never been in a boat before, but they find that stimulating, too, and it keeps them coming back.”

Under the guidance of Winger and volunteers, the apprentices build a variety of craft, including canoes, kayaks, skiffs and prams, which are ultimately sold and the proceeds put back into the program. The boats are beautifully made and highly sought-after: one canoe recently fetched $1,700.

Each summer, apprentices build two skin-on-frame canoes at the Como Lakeside Pavilion, with passersby and members of the public invited to ask questions and join in on some of the tasks. Then, apprentices and staff travel with the new canoes for a five-day trip through the Boundary Waters Canoe Area.

“Many of our youth have not been outside the Twin Cities area before,” says Marc Hosmer, Urban Boatbuilders executive director. “They experience the opportunity, often for the first time, to paddle, portage, swim, fish, cook, camp and see the wonder of the night sky away from the lights of the city. 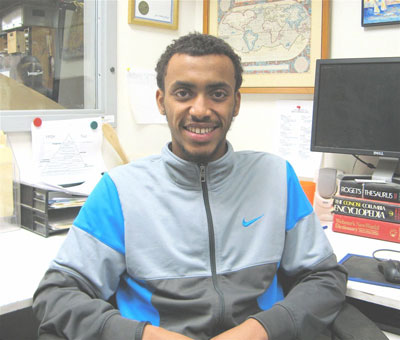 “What an experience that was,” said Mahamed Said recalling his trip last summer. Said, 17, a senior at Como Park Senior High School, added, “I always dreamed of doing something like that and I want to do a lot more boating and camping later in life.”

In addition to woodworking techniques, he said Urban Boatbuilders has taught him other lessons, some as basic as the need to show up on time. “When I first started here, I wasn’t punctual; I didn’t see that as something important. But Phil (Winger) shined the light for me, pointing out that it affected how people regarded me. Now I’m usually here early.”

There is an open shop at Urban Boatbuilders on Wednesday nights to which members of the community and prospective volunteers are invited. “There might be 20 to 30 people here, often people I’ve never met before,” Said recounted.

“I’ve learned to work as part of a group, not arguing, but finding ways to get things done. I used to be super impulsive, but this program has taught me to slow down and figure out how to resolve a problem,” said the apprentice, whose ambition is to attend college and become a bio-medical engineer.

Stephanie Yang, 18, a senior at AGAPE High School, is known for the attention to detail that she applies to her projects. The young mother said that Urban Boatbuilders has convinced her “that I actually can go somewhere in life.

“I want to own my own business,” she said. “I think Urban Boatbuilders is helping to prepare me for that because it is helping me get out of my comfort zone and to have better self-esteem.”

Financially, Urban Boatbuilders has been through a difficult couple of years, with the recession and the decision by some charitable foundations to shift support from after-school programs to early childhood development.

But things have turned around, according to Bob Anderson, Urban Boatbuilders board president. “We had to eliminate several staff positions, but fortunately we have a lot of wonderful volunteers who have a passion for what we are doing. We’re financially stable and have a reserve for the first time ever. I’d say our prospects are great.”

You can learn more about Urban Boatbuilders at www.urbanboatbuilders.org.

Roger Bergerson is a local historian who lives and writes at his home in the Como Park neighborhood.