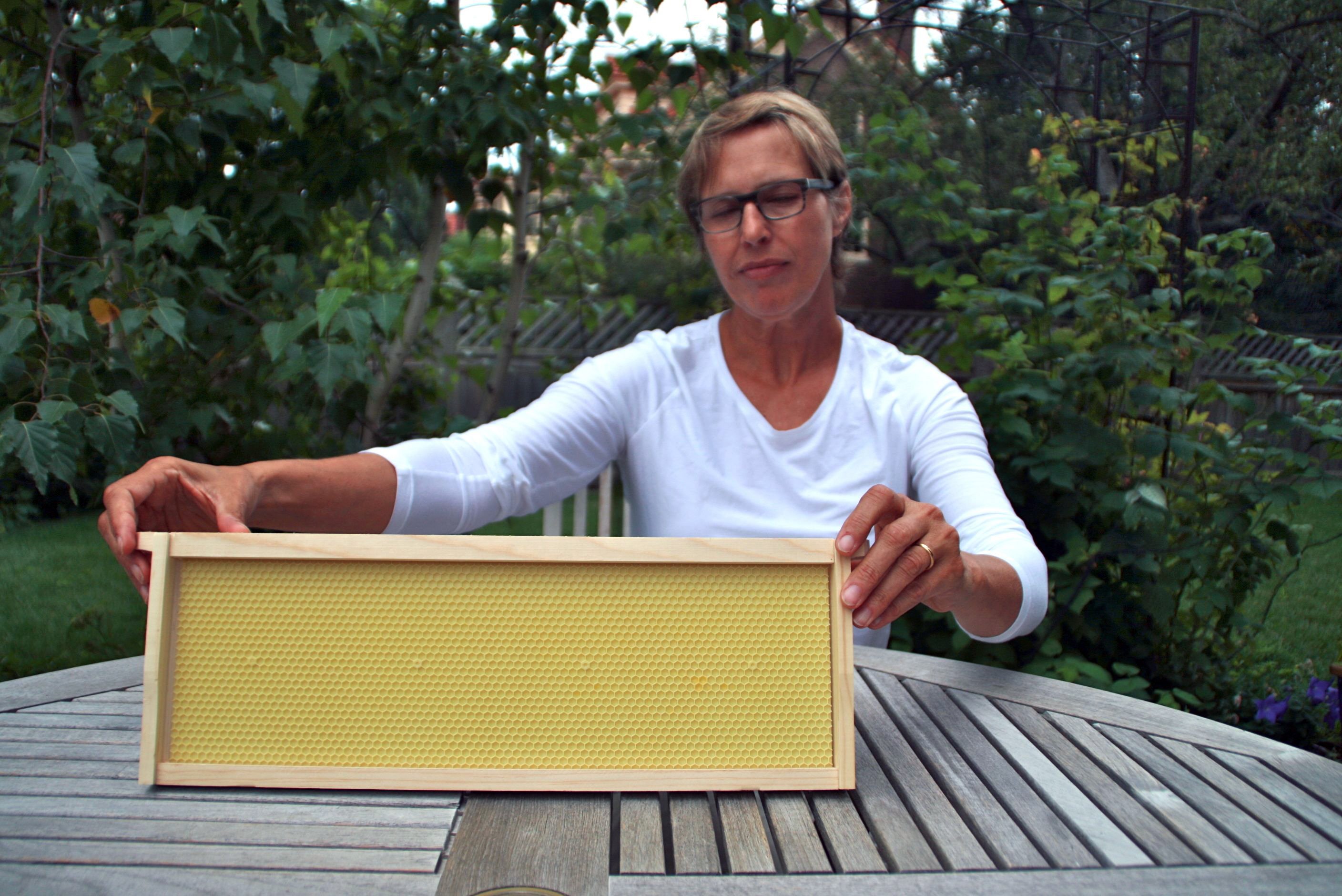 In 2009, the City of Minneapolis legalized backyard beekeeping. Since then, 20 people, evenly divided between North and South Minneapolis, have applied for and been granted permits to keep bees. Getting the permits isn’t easy. Applicants have to take classes at the University of Minnesota’s Bee Lab—considered some of the best in the Midwest—and get permission from 100 percent of their immediate neighbors. To keep chickens, you need only 80 percent approval.

The University classes are drawing nearly 275 people a session, but only a few who take them go on to set up home hives. (Workshops are also offered at places like Beez Kneez in the Longfellow neighborhood, where the mission is to bring bee education to the Minnesota masses.)

Katherine Sill is a first year beekeeper, with a hive tucked in a backyard corner of her Kenwood home. “Bees,” said Katherine Sill, “are in my blood. The city is the perfect place to raise bees. Urban bees are doing better than the bees in suburbs.”

She opened the hive just days before, checking on the queen bee. “I’m looking for the brood, the eggs the queen is laying, on the frames. The queen lays up to 2,000 eggs a day, the vast majority workers.”

“As a beekeeper, you want to watch that your bees are laying their eggs in a nice pattern on the frame and that they’re storing enough nectar. When a wax cell is full, the bees flap their wings to decrease the water content to about 15 percent, which is why there’s honey,” she says.

She’d just gotten stung when I arrived. “That hardly ever happens,” she says. She called her bee mentor at the University to see if she’d done something to annoy the bees. “The bees are not happy today. But, I was told that it’s the weather.” It’s a cloudy, cooler morning. “To keep from being stung, you have to pay attention and look at the edge of the frame before you grab it. But, bees aren’t scary. Actually, they’re quite sweet.”

Honeybees, which came to America with the Pilgrims, are unique in the bee world. They are the only bees to make enough honey for humans to harvest, and unlike many bees, they live in giant groups in a cooperative community. “Honeybees do more than is expected,” says commercial beekeeper Doug Fuller, who owns Cannon Bee Honey and Supply Company in Little Canada and is a commercial honey producer.

Life can be hard for a honeybee. In cold climates, a hive of honeybees can lose 30 percent of their population during a winter. For a hive to kept fed fed during the cold months, the bees need to have 100 lbs. of honey in the hive before the flowers fade. “I’ve got my fingers crossed that my girls make it through the winter,” Sill says.

Parasites like mites are also a problem for bees, and then there’s Colony Collapse Disorder, which has been killing off honeybees by the tens of millions.

While honeybees pollinate $30 billion worth of crops in the United States, there are 400 other types of bees in Minnesota who do that job, maybe even better. One type, the mason bee, is a (usually) stingless native Minnesota bee that is 70 percent more efficient for pollination than honeybees. It takes 40,000 honeybees to pollinate an acre of apple trees, a job that can be done by a mere 250 mason bees. That’s why LeAllen Estrem had a box of them mailed to his home in St. Paul.

“My wife is one of those people who don’t like honey,” he says, “and we wanted efficient pollinators for our fruit trees and berry bushes. They’re all queens, so there’s no hive. Instead, we have little bee houses—pieces of wood with holes drilled into them. In the winter, they hibernate in grass, so we grew native grasses. This is year three for our bees and they seem to be doing well.”

Back in Minneapolis, Sill is starting to grow honeybee-friendly Minnesota wild flowers like hyssop, cone flowers and Black-eyed Susans even though, she says, bees fly as much as three miles to find high-energy, high-protein pollen.

Sill isn’t expecting much honey this year but hopes that in the future her small hive will bring in five or more pounds. “That’s if it’s a perfect season—not too wet and not too dry,” she says. She promises that the first people to get a jar of her homegrown honey will be the people who signed the permits allowing her to have the bees in her backyard. “I totally love it,” she says. “They are lovely, interesting creatures. It’s like having a pet. They’re more work than a cat but less work than a dog.”

Novice beekeeper Katherine Sill shows off a frame, made of beeswax, ready to insert into her backyard hive.

The helmet is the only protection against bee stings that Sill wears.

Bees, some possibly male drones, have one job: to find a virgin bee queen, have sex, kill any rivals and then die.