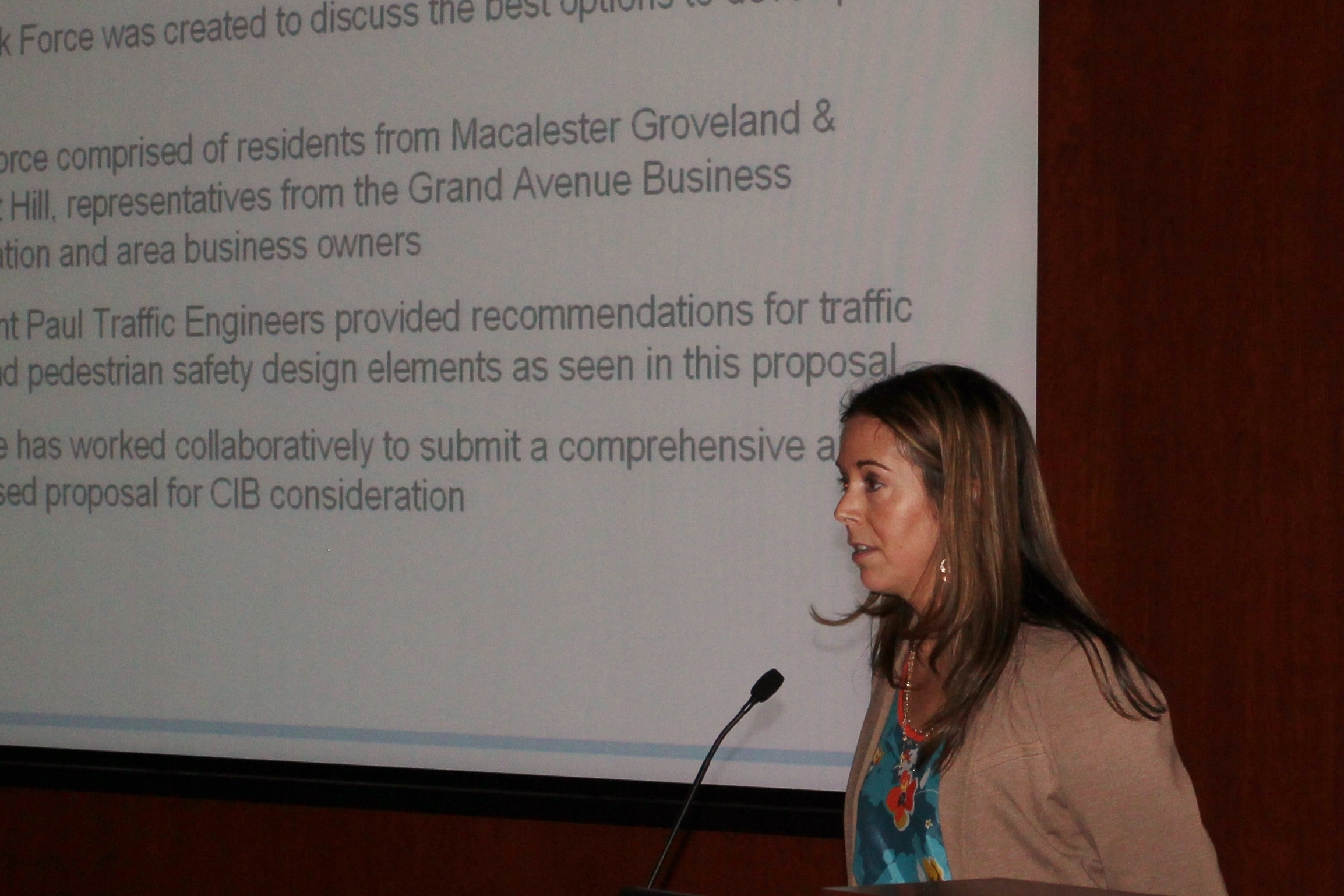 On behalf of the Collorative, Sara Schmidt, SHA Pedestrian Safety & Traffic Calming Committee Chairwoman addressed the Streets & Utilities Task Force of the City’s Community Improvement Budget Committee (CIB) at City Hall the afternoon of the 12th. Questions were raised by both the Task Force members and by City staff as to the elements of the proposal. The outcome of the Task Force’s deliberation and ranking of proposals for funding is still weeks off.

Grand Avenue is a heavily trafficked area, used by pedestrians, cyclists, motorists, and public transportation. This area of Grand Avenue experiences high pedestrian traffic to access businesses, residences and apartments. The goal of the Collaborative with this project is to improve safety for all users of Grand Avenue by calming traffic and bringing more visibility to pedestrian traffic in the area. All three community groups have wanted to make Grand Avenue pedestrian safety and traffic calming improvements for a number of years.

Following a pedestrian fatality on Grand Avenue in late August 2012, SHA, MGCC and GABA began meeting jointly to develop this proposal with the technical assistance of St. Paul Public Work – Traffic Division. Although the original concept of a three-phase proposal needed to be adjusted to two phrases, the group believes that City funding would be in the best interest of local business customers, residents and visitors to Grand Avenue. There have been two pedestrian fatalities in this area of Grand Avenue in less than two years, and it is also the site of several accidents involving pedestrians or bicyclists.

St. Paul Law enforcement personnel have told the Collaborative that increasing police patrols could reinforce the call for pedestrian awareness, but it will only temporarily change the behavior of motorists. They clearly noted that there needs to be a variety of approaches used to tackle the pedestrian safety problem. Many agree that it will take enforcement, education and engineering to slow traffic and raise awareness for pedestrian rights. The hope and goal is that incorporating a two-phase approach of bumpouts, center painted medians, parking lane striping and increased signage would assist in creating those permanent changes. These phases are options to consider for calming traffic in this area, but before implementation, the Collaborative would meet with neighbors, businesses and city staff to finalize the details.

The first phase of the project for this round of CIB consideration includes:

The second phase of the project for consideration includes:

As of this writing, the second phase lighting may be problematic as current City policy only requires that a corridor meet minimum standards of lighting….which this span of Grand Avenue already does. The Collaborative feels that local residents, customers and visitors will be better served if they can be better seen. Therefore the proposed increase in crosswalk lighting phrase of the project. Discussion will be held with City staff in the days following the CIB Task Force presentation to explore options and barriers to improved lighting at the two intersections at Grand & Syndicate and Grand and Dunlap. If selected and approved by the City, the project work would start in 2014/15.

For more information or to get involved with the SHA Pedestrian Safety & Traffic Calming Committee on this or other projects, please contact the SHA office by email at:summithill@visi.com or phone at 222-1222.