The University of Minnesota stood independently for nearly a decade before Minnesota became a state — 160 years later, little has changed.

Thousands of students descend on campus each day, many unaware of the tumultuous history and hard-fought legal battles that shelter them from academic censorship and political whim.

They live and study in an immovable stone metropolis — a city within a city — that will exist long after they’re gone. The decisions of the Board of Regents often impact their lives more than city ordinances or state laws.

Even though it now gets more than $1 billion every two years from the state Legislature, the University has complete control over its affairs. It has cut the General College, frozen faculty hiring and restructured its Graduate School, all without outside approval.

It’s called “constitutional autonomy,” and it puts the University in the unique position to govern itself outside the bounds of state lawmakers in St. Paul.

In the past, lawmakers have tried to make changes for their own political purposes, but history shows it’s not going to happen.

Rather than existing under state control, in many cases the University is above it. Established before the state itself, the University’s autonomy is written in the Constitution — written in stone.

To take control of the University, lawmakers would have to go through a process almost impossible to accomplish. It would call for a controversial constitutional amendment, which the people of Minnesota would have to vote into law.

But no one plans to change it. The idea of constitutional autonomy is so established that nobody questions it.

To the regents, the autonomy gives control to education-minded experts. To lawmakers it excludes partisanship from the state’s premier university. For students and faculty members, it keeps the freedom to research and learn alive.

Last session, state lawmakers included a catch in the money they gave to the University: In order to receive a portion of its funds, the University would have to meet specific academic standards that were laid out in the bill.

Some said the state was encroaching on the University’s territory.

But they only put 1 percent of the funds on the line; the move was more symbolic than pragmatic, and many saw the measure as sending a message.

Sitting around the broad maple table on the sixth floor of the McNamara Alumni Center, many from the typically docile Board of Regents disputed the “strings attached” funding.

Even newly-appointed President Eric Kaler seemed skittish about the idea.

But in the end, the majority of the Regents approved the measure. Because they control the money, Legislators still have leverage to make powerful suggestions that the University usually follows.

“Pick your fights,” warned Regent Steve Sviggum, former Speaker of the Minnesota House. “The risk, members, is not 1 percent of our funding. That’s not the risk. The risk is our relationship with the Legislature and the citizens of Minnesota into the future.”

The Regents are not accustomed to being told what to do, even if the suggestion means little. To some, the requirement seemed to be the beginning of a “slippery slope.”

“It’s just a naughty little issue between the Legislature and the Board,” said Regent Dean Johnson.

But when academic freedom is on the line, the University “jealously guards [its] autonomy,” Morrison said.

Last session, legislators tried to ban state and federal funding to state programs for human cloning research — an area University experts say may be a revolutionary next step in fighting disease.

Before the issue could be tested in the courts, Democratic Gov. Mark Dayton killed the bill and ensured the human cloning language wouldn’t make it into the final product.

Infringements on the University’s research and education are the most likely to face retribution, Board of Regents Chairwoman Linda Cohen said in an interview.

“Academic freedom is so important, so frankly that was worrisome when some of the legislators wanted to limit what the research could be on.”

An early test of the University’s autonomy came in 1927 and showed what happens when legislators try to dictate academics.  A bill backed by a Christian fundamentalist would have restricted teaching evolution in any publicly-funded school in the state.

Stiff opposition from students, the administration and President Lotus Coffman eventually led to the bill’s demise. 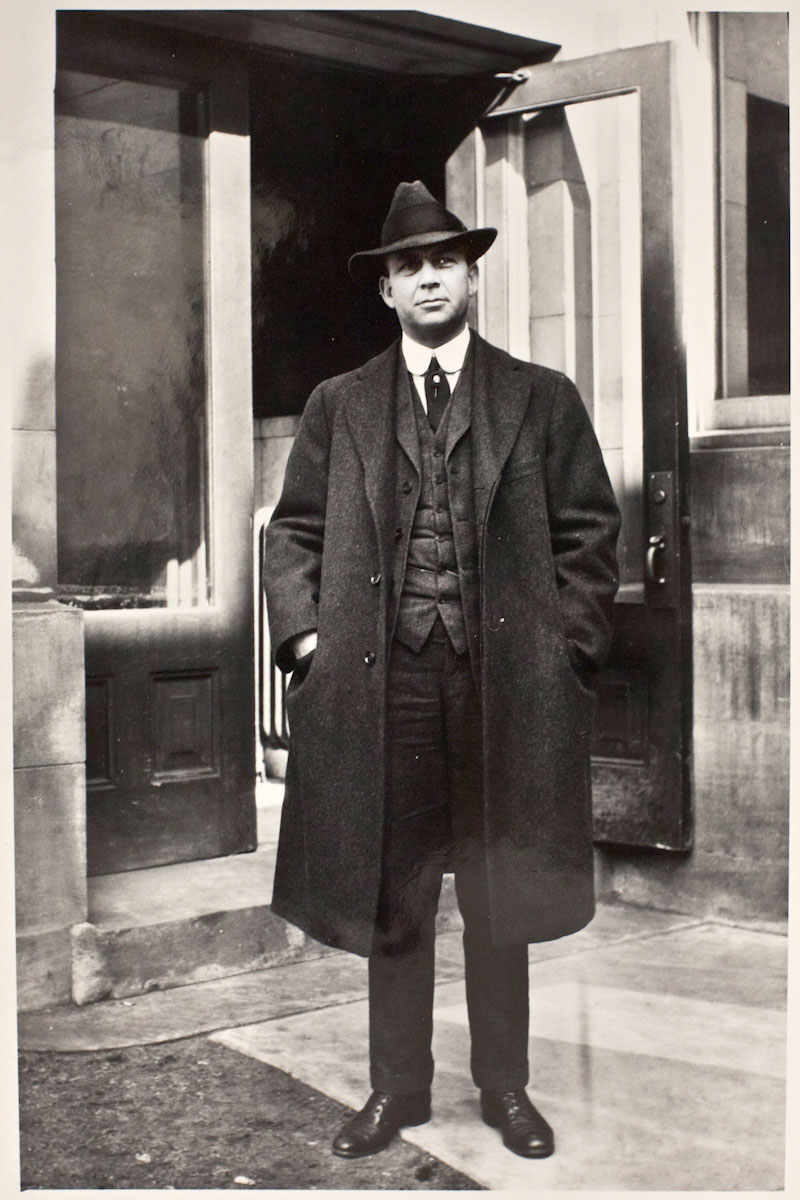 That tradition began in 1851 when the territorial Legislature created the University — before Minnesota had even become a state. Over the next century-and-a-half, the student population bloomed to more than five times the size of the original territory.

When Minnesota joined the union in 1858, the new state affirmed the rights and constitutional freedoms of the University as an entity older than itself. Now it is one of at least 19 state universities to have such protection.

Historians and law experts point to the constitutional adoption as the reason the University’s freedom exists today.

But, despite Minnesotans’ fervor for their land-grant university, as financial crises hit and the Civil War raged in the early 1860s, the University nearly failed.

John S. Pillsbury, known as the “father of the University,” is perhaps the single reason the University of Minnesota exists today.

He helped settle the University’s many debts and in 1867 secured its first state appropriation for higher education — $15,000. 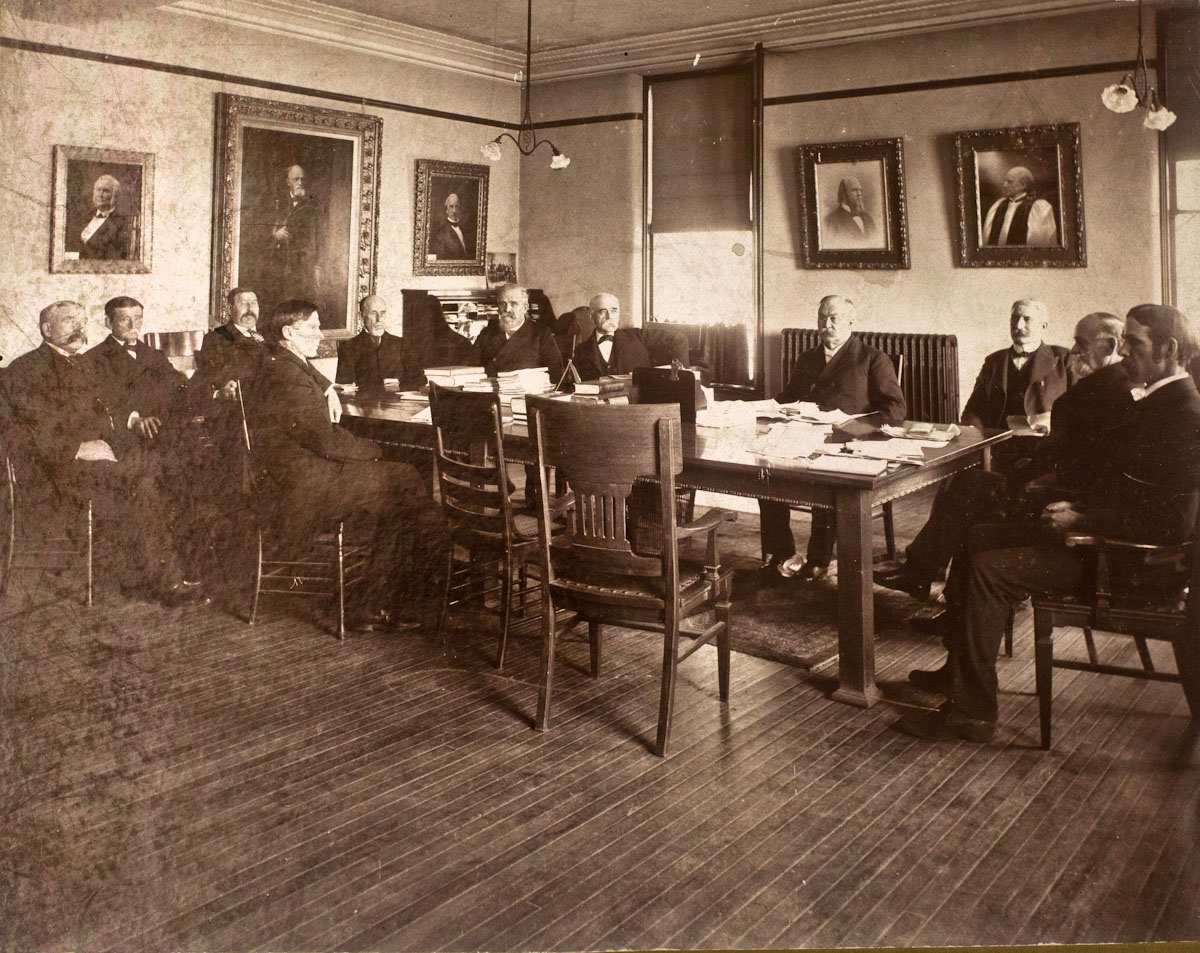 A Board of Regents meeting with John Pillsbury, “the father of the University.”

As years passed, the University’s enrollment skyrocketed and state funding grew to upwards of $500 million a year. The system expanded to include four satellite schools and to produce the brunt of research in the state of Minnesota.

But still, the constitutional autonomy question — mostly hovering behind the scenes as an arbiter of academic freedom and respected tradition — has lived on.

It has been partially defined in a series of court cases over the last century and will continue to be tested into the future.

Lawmakers, University officials and lobbyists say that the autonomy is here to stay.

“You don’t have to have that discussion every year, because people generally know and understand that the University does have autonomy,” said the Donna Peterson, associate vice president of University Relations. “People know about it and they know it’s there and respect it.”

Despite state aid that’s been rolled back to 1998 levels, the University continues to work closely with lawmakers on budget and policy measures like those included in last session’s Higher Education bill.

The 1 percent funding rider would amount to about $5.4 million in withheld aid if the provisions aren’t met. The Legislature also originally requested that the University not exceed a tuition increase of 5 percent and 4 percent for the next two academic years, but Dayton vetoed that version of the bill. The University has complied with those requests in the past.

Eighteen percent of the University’s budget comes from St. Paul. Even with plummeting state aid, lawmakers and the University work together to craft bills that suit both.

“I view that language as a nudge, a pretty direct nudge,” Chief Financial Officer Richard Pfutzenreuter said of the requested tuition cap.

Peterson and others in the University’s Government Relations office worked throughout the session to hone the 1 percent performance measures to acceptable limits for the University. They also partnered with Dayton to oppose the human cloning restrictions that were ultimately stricken from the legislation.

But it would seem that most students take Peterson’s work and the University’s constitutional autonomy for granted.

A group of 13 students sat in the lobby of Nicholson Hall doing homework and surfing the Internet on a recent morning.

Not one of them was aware that the University is separate from the state. Some were surprised at the news, while others thought it strange that a law was required to make it so – they thought that’s simply how it should be.

“If the students take away one thing from it,” Morrison, the constitutional law expert, said, “it is that the University’s autonomy to a very substantial extent protects them from having an institution that is simply preaching the political doctrine of whoever is the majority in the Legislature.”