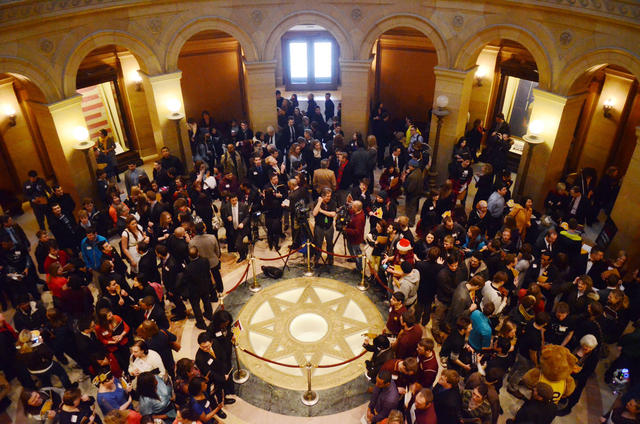 Issues like a proposed tuition freeze, medical amnesty and student debt brought out more students to Support the U Day from all University campuses than in past years.

The day began with a rally that included speeches from students, state lawmakers and University President Eric Kaler and allowed students the chance to meet with legislators.

“If we don’t rise up and actually say what we want, no one else is going to help the students out,” Ramirez said.

Rep. Gene Pelowski, DFL-Winona, wore a red sweater to symbolize the need to “stop the bleeding of higher education,” he said.

It’s important for students to meet with legislators and continue to follow up throughout the session, he said.

Tuition could be frozen at current levels for in-state undergraduate students in 2014 and 2015 if the state fulfills the University’s budget request.

Kaler, who proposed the tuition freeze in September, said he was “thrilled” by Gov. Mark Dayton’s support of the University in his State of the State address Wednesday night.

“We need to do everything we can to make the University affordable and accessible for qualified Minnesota students,” Kaler said Thursday.

“You are the key to our economic recovery,” she said in a speech to students at the rally.

Matt Forstie, Minnesota Student Legislative Coalition chair, said student turnout from the Twin Cities campus at Support the U Day has been “extremely low” in past years, but this year, more than 400 students pre-registered to attend.

In addition to the rally, students met with more than 40 state legislators to talk about issues.

Rep. Nick Zerwas, R-Elk River, said meeting with students is good for legislators because it “puts a face to the numbers,” but it’s important students meet with representatives of their home district.

They will get a better response from those legislators, Pelowski said, because more people will be voting for their cause.

“It’s not just the student then,” he said. “It’s their parents. It’s friends. It’s who they know voting for higher ed.”

“Instead of just saying ‘Keep tuition low and keep the appropriation high’ … they can give explicit, relevant data,” she said. “[Students] can be a very important lobbying force.”

Students in attendance Thursday said they thought their lobbying efforts were important to getting concerns addressed.

“A strong relationship with legislators is the key to breaking down barriers we face as students,” he said.

Marketing senior Luis Guitart said if students don’t advocate for their concerns to lawmakers, “the message gets lost.”

While some students said legislators were receptive, economics freshman and MSA member Ryan Olson said the representatives he met with were “apprehensive” regarding how they want to fund the University.

He also emphasized the importance of keeping tuition rates low for Minnesotans.

“It doesn’t really matter how great your school runs and how great money is spent in administration if students from the state of Minnesota can’t afford to attend,” he said.

Pelowski said he wants more detailed reporting of higher education spending to increase accountability but said he was unsure how much money would be available for University funding.

“I’m not sure how much money there’s going to be here for higher ed,” he said.