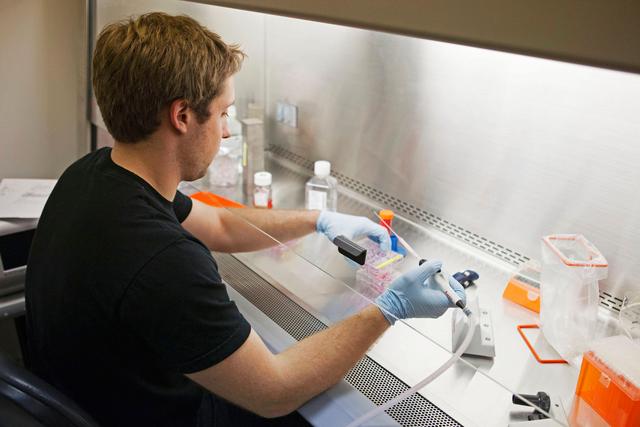 University of Minnesota researchers were part of an international effort that found a cheaper, faster and more specific way to genetically modify livestock.

The research technique was published in Nature last month and in the Proceedings of the National Academy of Sciences last Monday, sparking controversy from animal rights groups.

The research group — made of scientists from the University, Texas A&M University, the University of Edinburgh and Twin Cities-based company Recombinetics — is using the technique known as TALENs on cattle for a more humane dehorning process, as well as to study heart disease in miniature pigs to better understand the disease in humans.

Animal research at the University has a history marked by controversy and protest. An activist group stole more than 100 animals from labs in 1999, and researchers have received death threats in the past.

The Institutional Animal Care and Use Committee regulates animal research done at the University and at any affiliate that uses University grant money.

Scott Fahrenkrug, a University animal science professor who was the senior author for the study, is also a co-founder of Recombinetics, a biotechnology startup, which is where he now conducts most of the research published in both papers.

Because Fahrenkrug is a University researcher, his research is regulated by IACUC just like any research conducted on campus.

Fahrenkrug said the researchers are studying heart disease in pigs because they are more genetically similar to humans than traditionally used mice.

But Nina Mak, research analyst at the American Anti-Vivisection Society, the first nonprofit animal rights group founded in the U.S., said animal research is wrong because it treats animals as objects.

Mak said animal models will always have “massive shortcomings” because they can never exactly replicate how diseases occur in humans.

Fahrenkrug disagrees, saying these shortcomings are exactly what they are trying to fix by using pigs instead of mice.

“We’ve cured cancer in mice so many times it’s ridiculous,” he said.

Justin Goodman, associate director of lab investigations for People for the Ethical Treatment of Animals, agreed that studying animal models of diseases is ineffective. He said PETA doesn’t think any animal should be treated as a “disposable lab experiment.”

But Fahrenkrug said he’s “at peace with” using animals to study human diseases.

“The absence of an accurate large-animal model has been one of the main causes for the failure of the drug development pipeline,” he said.

In another genetic modification project, Fahrenkrug’s team found that by taking a gene from hornless Red Angus cattle and inserting it into the genome of dairy cows, it can produce cows without horns.

Most dairy cows in the U.S. are dehorned so they don’t hurt other cows or farmers, according to the U.S. Department of
Agriculture.

Fahrenkrug believes the group’s research to produce hornless cows is important because the physical trauma to the animal during the dehorning process is “unacceptable.”

Mak disagrees. She said dehorning practices are more common on factory farms, and genetically modifying an animal to encourage the practice is “using a wrong to address a wrong.”

Researchers haven’t tried this method on real cows yet, but Fahrenkrug said they have been successful with dairy cow cells.

Fahrenkrug said Recombinetics has had trouble getting funding for this type of genetic engineering because investors are still reluctant to fund the controversial research.

PETA has an active campaign to end dehorning practices, and Goodman said producing hornless dairy cows might be a good idea.

He said if it would prevent cows from having to undergo the painful process, this research isn’t necessarily a bad thing.

Fahrenkrug said despite the controversy surrounding animal research, everyone can agree on the importance of its potential discoveries.

“I think we can all agree that we need to take our best efforts to find cures and to feed the world,” he said. 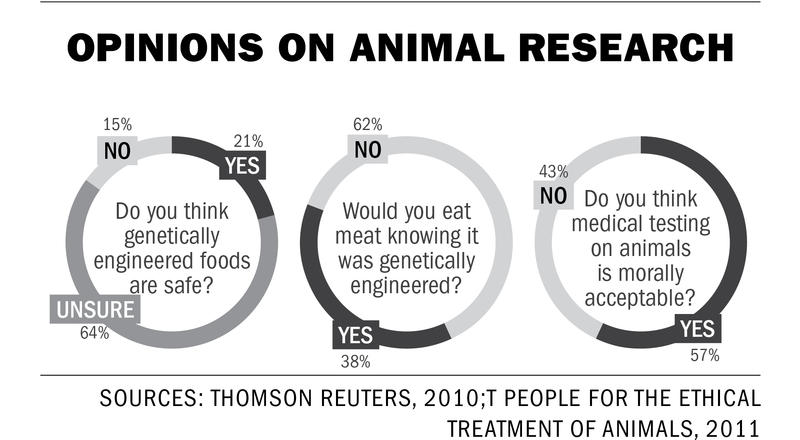