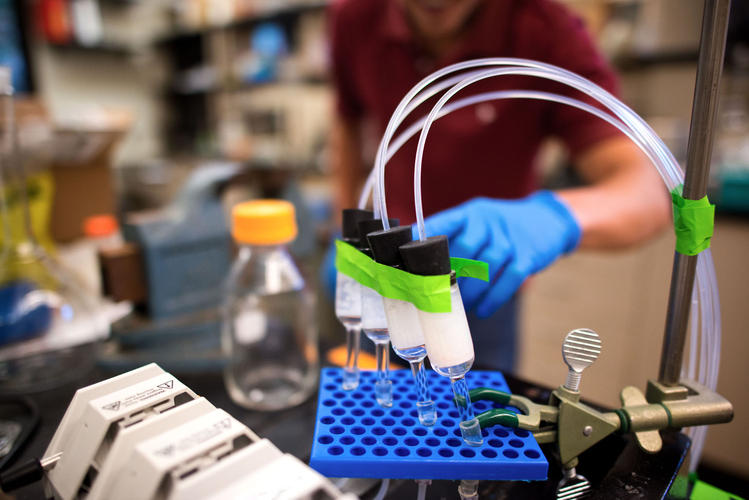 When fracking is complete, the water used can be so contaminated with oil, gas and sediment that it turns black. But University of Minnesota researchers have found a way to clean this water with bacteria, earning funding to continue their research and apply it industrially.

Fracking, or hydraulic fracturing, is the process of using highly pressurized water to horizontally harvest natural gas and oil from shale. It has caused controversy in the U.S. Opponents argue it uses too much water, can cause oil spills and contaminates the water it uses. Proponents say energy demands are too high to not use shale oil and gas.

In 2012, 36 percent of the natural gas produced in the U.S. came from shale, and the U.S. Energy Information Administration predicts this will increase to 49 percent by 2035.

Larry Wackett, a biochemistry professor and a principal investigator for the project, said the team is in the middle of this debate.

“We see ourselves at the University as not being on industry’s side or the environmentalists’ side,” he said. “We’re trying to solve a problem.”

The University student chapter of the U.S. Association of Energy and Economics sides with the industry. Shawn Zwonar, a chemical engineering junior and secretary of the group, said the U.S. has an abundance of natural gas that should be used.

But another student group, Environment Alliance, is against fracking. Christopher Swanson, an environmental science senior and officer for the group, said fracking was a “short-sighted approach to energy.”

“They’re never going to remove all the pollutants,” he said. “When they make something that they’re going to be doing cleaner, that’s good, but I’m still not for it.”

The solution comes in the form of centimeter-sized silicon beads that have chemical-degrading bacteria trapped inside of them.

Researchers make the beads by mixing liquid silicon and water with the bacteria and dispensing the solution into a column with mineral oil. Once it hits the oil, the solution rounds into balls. Finally, they take the oil out of the column and let the beads harden.

Wackett explained the bacteria are naturally found in soil and water, so they are safe to use for water treatment. The goal is to eventually use the beads in the filtration systems of water treatment plants.

The research team consists of about a dozen people from the College of Biological Sciences, the College of Science and Engineering and the College of Food, Agricultural and Natural Resource Sciences. They are beginning to test this discovery on a larger scale.

To do so, they have partnered with Tundra Companies of White Bear Lake, Minn., and Luca Technologies of Golden, Colo., as part of the grants’ stipulations. Both companies specialize in bioconversion technologies like the silicon beads.

What researchers still need to find

Wackett said the research team still needs to figure out how long the beads can degrade the chemicals before they need to be replaced, what to do with them once they’ve been used and what bacteria to use to degrade all of the different chemicals.

Alptekin Aksan, assistant mechanical engineering professor and a principal investigator for the project, said researchers will have to deal with many industrial factors, like transporting and storing the beads, once they scale up the project.

“The transition of scaling up is not that simple,” he said.

The team has enlisted the help of the DNA Sequencing and Analysis Facility to find more bacteria to use in the beads. Wackett said the group tested the fracking wastewater to see if there were any useful bacteria in it already, and there were 3,500 different bacteria species.

Researchers can put certain bacteria in the same beads together “like an assembly line,” Aksan said, but others may have to be in their own beads. Conveniently, the silicon material can encapsulate all the different types of bacteria they use.

Aksan described fracking as a “once in a lifetime opportunity” for the U.S. to gain energy independence.

“As long as we can help make this process safer,” he said, “it’s going to be much more obvious to everybody that there is no harm in responsibly using this abundance of energy.”