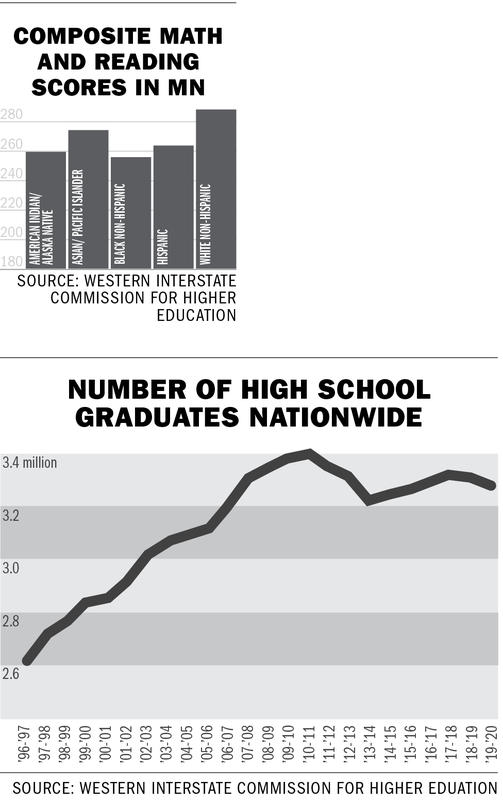 With the pool of high school graduates predicted to undergo major changes in the next few years, the University of Minnesota is reconsidering recruitment and college preparatory strategies.

A Jan. 10 report predicted a shrinking and diversifying cohort of high school graduates nationwide. The report was released by the Western Interstate Commission for Higher Education — an organization funded by and comprised of 15 western states.

The main cause of the decline, he said, is simply that fewer people were born 18 years ago, although other factors like immigration also play a role.

But the decline isn’t a surprise to University administrators.

The Office of Undergraduate Education has been tracking the drop in high school graduates for about five years, said Bob McMaster, vice provost and dean of undergraduate education.

In response, McMaster said the University has focused on increasing national-level recruitment, especially from areas including Chicago and Kansas City.

“We said, ‘we better make sure we have established some pipelines outside this area,’” McMaster said.

University personnel often visit high schools and establish partnerships with school counselors as they vie for students from across the country, said Rachelle Hernandez, director of admissions. They also want to be sure they are targeting Minnesota students and residents.

By the end of the decade, an estimated 45 percent of public high school graduates will be people of color — up 7 percent from 2009 graduates.

Preparedness for education among certain races and ethnicities has been traditionally lower nationwide, Prescott said.

The WICHE report shows that composite math and reading scores for Asian and white eighth graders in Minnesota hovered around 280 in 2011, while scores for black, Hispanic, American Indian and Alaskan Native students that year were an average of about 20 points lower.

While these numbers reflect the performance of students in Minnesota, Prescott said that nationwide, “there’s a severe educational achievement gap.”

As the numbers of high school graduates decline and the number of minority graduates increases, the University is going to have to succeed in recruiting and retaining minority students, said Rickey Hall, assistant vice president for equity and diversity.

The University makes efforts to meet this goal, Hall said, through programs that expose underrepresented K-8 youth to campus and educate first-generation parents on the college process.

The group has five goals, Goar said, like ensuring all children are kindergarten-ready and achieve eighth grade math proficiency.

In the coming years, Prescott said closing the achievement gap will also be a concern for the corporate sector as it looks for college-educated employees.

“It’s been a bit of a luxury … to allow these wide gaps to persist.”