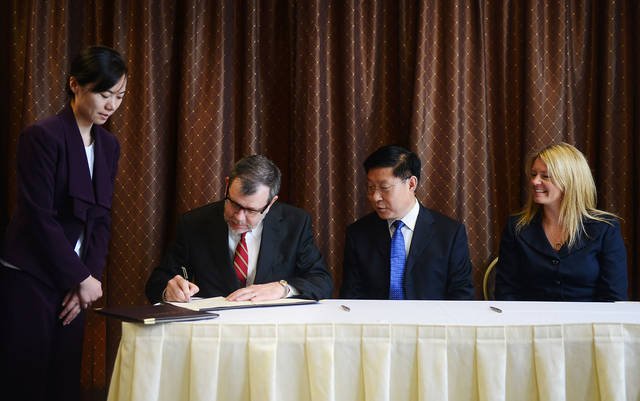 On behalf of the National Center for Food Protection and Defense, President Eric Kaler signs a memorandum of understanding with the Chinese Academy of Inspection and Quarantine. (Photo by Bridget Bennett)

The National Center for Food Protection and Defense — a Department of Homeland Security center housed at the University of Minnesota — gained a new international partner this week.

President Eric Kaler and Li Xinshi, director general of the Chinese Academy of Inspection and Quarantine, agreed to a memorandum of understanding on food safety, food protection and food defense issues during a signing ceremony Thursday at the Campus Club in Coffman Memorial Union.

“Particularly in this area of food safety, where we are very strong … this connection with a premier organization around food safety in China is a big deal for us,” Kaler said. “I think it’ll open some doors and provide opportunities across the board.”

The CAIQ is a public research organization in China and leads scientific research related to food inspection and protection.

The University has been home to the NCFPD since 2004.

The two organizations have a common bond in working to prevent and combat intentional contamination of the food supply, whether for economic or terroristic reasons, said Amy Kircher, acting director and associate director of the NCFPD.

“Knowing that we have a global food system, it is really important that we work with our collaborators and find partnerships around the world,” she said.

The new partnership comes at an opportune time.

It also falls on the heels of Kaler’s visit to China, where he renewed partnerships with other Chinese research institutions and organizations.

Li acknowledged the anniversary during his speech, adding that he hoped the ceremony would “open a new age for collaboration for the next 100 years.”

Kaler said signing the memorandum was a significant step for the University’s partnership with China in areas of higher education and scientific endeavors.

“We are extremely proud and very eager to continue to work with [CAIQ] to tackle one of the world’s most critical public health and public safety challenges,” he said.