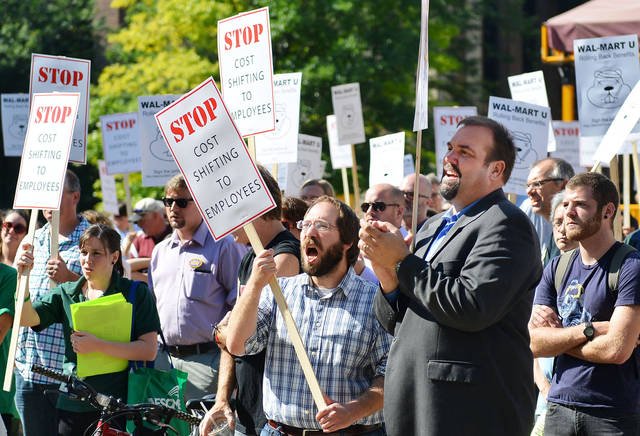 Unions at the University held a rally protesting the increasing premiums and deductibles of the University's health care, UPlan, for employees at Morill Hall on Thursday. (Photo by Chelsea Gortmaker)

Hundreds rallied against proposed changes to the employee health care plan in front of the University of Minnesota’s main administrative building Thursday.

Clerical, technical and health care union members and supporters wielded signs with the slogan “Stop cost shifting to employees” while speakers stood on the steps of Morrill Hall and spoke out against health plan changes.

To avoid a $48 million excise tax from the Affordable Care Act, the University plans to increase copays for primary and secondary care and add a deductible to its employee health care plan, the UPlan. The changes would begin in 2014, according to a memo sent to UPlan members in July.

Although the tax wouldn’t take effect until 2018, Vice President for Human Resources Kathy Brown said in the memo that the University needs time to ensure health plan changes have the desired effect to avoid the tax.

The University is unable to comment further because it’s currently in mediation with AFSCME, University spokeswoman Brooke Dillon said.

Some employees belonging to the American Federation of State, County and Municipal Employees unions, are proposing a sliding scale health care model in which employees pay premiums that are tied to their income.

Cherrene Horazuk, president of AFSCME Local 3800, which represents clerical workers at the University, said the unions will continue mediation on Tuesday.

“We need a health care model at the University that doesn’t harm the lowest-paid workers,” Horazuk said.

Under the union’s proposal, all employees would pay an equal percentage of their income for health care, Horazuk said. She said this would ensure that workers on the lower end of the wage scale wouldn’t have such a burden.

“For most of our employee population, these changes are not that significant,” he said in July. “They are not going to cause most employees or their dependents to defer necessary care.”

The University’s Office of Human Resources said the UPlan changes are intended to reduce the harm to its most vulnerable employees.

“We strive to minimize the impact of potential changes on those employees with serious and chronic health conditions,” Chapman said in a statement last week.

Horazuk said she thinks the University’s administration won’t discuss the sliding scale plan because those with large salaries would have to pay more. She said their rationale was unclear.

“They won’t talk about any reasons that they oppose it,” she said.

Associate gender, women and sexuality studies professor Eden Torres, who spoke at the rally, said she was dismayed at the University’s unwillingness to discuss the sliding scale plan.

She said the University is “stepping on” its workers.

Although she was happy with the turnout at the rally, which included a surprise performance by musician Billy Bragg, Torres said she wished more students had come.

Brian Schmidt, a graduate teaching assistant who attended the rally, said he appreciated the widespread support from students, faculty and staff.

Horazuk said the University is “shutting down” discussion on the sliding scale issue.

During the summer, Horazuk said AFSCME proposed the plan at the Benefits Advisory Committee, which deals with benefits for employees across the University. Employees were told the issue would be further discussed early this month.

But AFSCME members received an email Sept. 10 that said the union couldn’t discuss sliding scale premiums at the BAC because members had raised the issue in bargaining, Horazuk said.

During mediation on Friday, Horazuk said members of the administration turned down the sliding scale proposal again.

Although Tuesday’s meeting was the last date specifically set aside for health care mediation, Horazuk said the unions could work with a mediator if members think they need to continue.

She said the unions are also looking at other ways to lower health care costs for employees besides a sliding scale.

“We are willing and committed to discussing this and continuing to negotiate until we can get an affordable health care plan for all University employees,” Horazuk said.

Correction: A previous version of this story incorrectly stated the intricacies of when employees proposed the plan to the University. AFSCME members first proposed the idea over the summer.