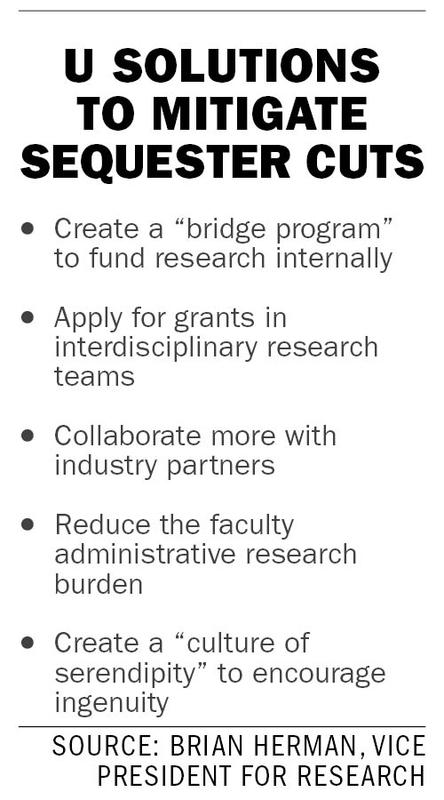 The dust has settled after sweeping budget cuts known as the sequester went into effect last month, and federal agencies have responded with how they’re going to implement them.

University of Minnesota Vice President for Research Brian Herman said the University’s $749 million research enterprise will be largely unaffected this fiscal year, but the future is less certain.

Congress cut a total of $85 billion from this fiscal year, which ends Sept. 30, and without further legislation, will cut billions every year until 2023.

Most federal research funding agencies have taken a 5.1 percent reduction. For the National Institutes of Health — the University’s largest federal funding agency — that means $1.5 billion less in research money this fiscal year.

Herman said his office has a number of programs and ideas it will implement over the next several years to help mitigate the effects of these cuts, many of which are already in place.

“We’re already doing a lot of things to try to support the University community in an ongoing basis,” he said. “… Hopefully some will be earlier, but within the next six months or so, these things will be formalized and then implemented.”

Herman said he’s asking top administrative offices like his, the president’s and the provost’s to reallocate existing funds into the new bridge program.

A panel of scientists will peer-review internal grant applications, much like federal agencies do, and fund faculty and students hurt by the sequester.

The panel may include scientists within and outside the University, Herman said, and the grants will last six or nine months.

“If we really believe what our mission states,” he said, “then we have to do what we need to do to make sure we support [teaching, research and outreach] as strongly as we can.”

Many other top research universities already had bridge programs in place or have started them in response to the sequester.

Herman said he also wants to encourage faculty members to apply for grants in teams in order to increase their chances of getting funded.

Many faculty members have said their administrative workload pulls their focus from teaching and research. On average, primary grant holders spend 42 percent of their time on administrative tasks, according to a national survey.

Herman said his office is currently looking at the administrative burden to find processes that could be streamlined or even eliminated.

“We’re asking, ‘Are we mandated by law to do those things?’ If we’re not mandated, why are we doing them? It may be very good to do them,” he said, “or it may be that we shouldn’t do them or don’t have to do them.”

Herman said he seeks to create a “culture of serendipity” where researchers are encouraged to work together informally across disciplines, which can be achieved through more open building design.

“There are a variety of things you can do with the physical space,” he said, “to create an opportunity for people to have these unstructured, but turns out to be very interesting, conversations that spark creativity and ingenuity.”

The cuts come at a time when some research needs more funding than ever before.

Every $1 spent on agricultural research and development can reap $10 to $20 in return, but it takes time and constant vigilance. Wheat rust has come back because research funding has decreased, Pardey said.

“You can hold [a disease] at bay for some period of time by breeding resistance into the crop,” Pardey said, “but Mother Nature’s pretty tricky. … It’s literally a perpetual race.”

University pharmaceutics professor Jayanth Panyam said graduate students — the “engines that run the research in this country” — are most at risk from federal cuts because many faculty members can’t afford to take on another one.

Less federal money will also mean even lower success rates for receiving grants. One in five grants submitted to the NIH is funded, and many predict this figure will drop following sequester cuts.

Panyam compared applying for federal grants to selling a house: The longer it’s on the market, the harder the owner has to work to sell it.

“I don’t see the feeling going up anytime soon,” he said, “so what that means to many of us would be to just keep trying harder.” 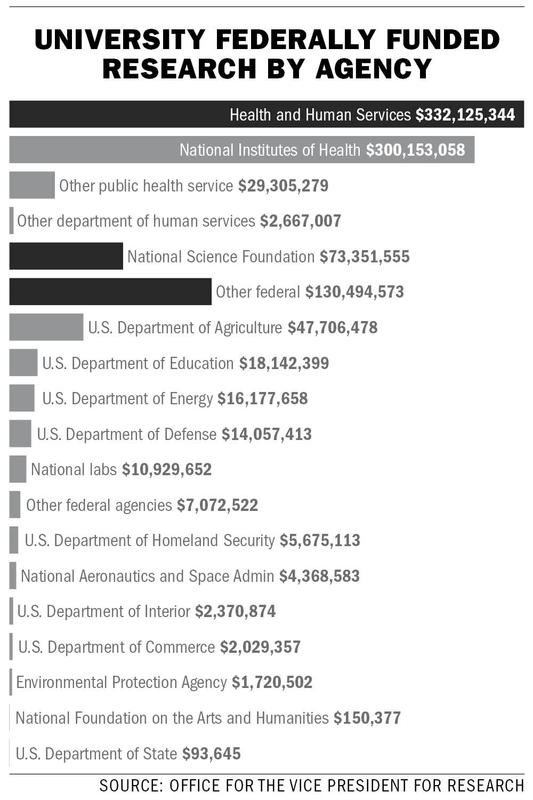