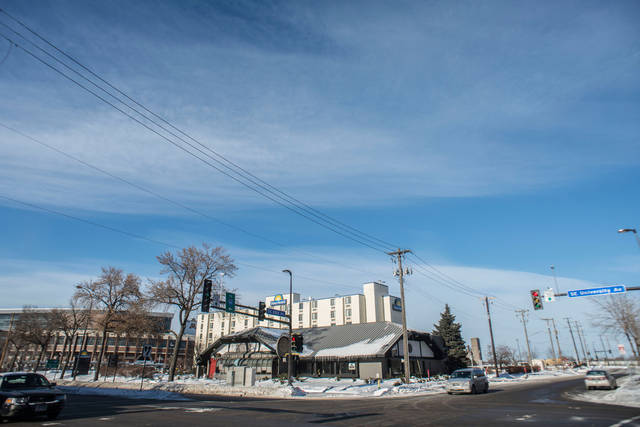 The lot that Tea House and the Days Inn Hotel occupy at the corner of University Avenue and 25th was recently purchased by the University. (Photo by Patricia Grover)

If an elevator breaks down at the Days Inn Hotel, fixing it falls on the University of Minnesota’s shoulders.

If owners of the Tea House Chinese Restaurant have tenant concerns, the University gets the reports because it now owns the restaurant’s property.

As campus neighborhoods are redeveloped, the University will play a larger role in their future — starting with a large plot near TCF Bank Stadium.

In January, the University entered into a joint venture with United Properties, a Minneapolis-based development company, to acquire the property worth $12 million. The land could be redeveloped in as soon as five years.

“We just want to make sure that whatever replaces the existing hotel does serve the University’s needs and mission,” University director of real estate Susan Weinberg said.

Together, the University and United Properties now own and operate the Days Inn Hotel and serve as landlord for the Tea House Restaurant. The purchase on the 2400 block of University Avenue Southeast also includes 170 parking spaces.

Though the land likely won’t change before 2019, Weinberg said plans for the area are in the works.

A board of governors made up of two University officials — Chief Financial Officer Richard Pfutzenreuter and Vice President of University Services Pamela Wheelock — along with three United Properties employees will continue discussions to decide the land’s fate.

Ideas for the plot include retail or office space, a hotel or housing said Brandon Champeau, United Properties assistant vice president and University alumus. Whatever the company decides to build, it will be iconic to the University’s area, he said.

“All options are on the table,” he said.

Under the current agreement, if the board cannot agree on a plan for the space, the joint venture will dissolve and the University will have the right to acquire the property, Weinberg said.

United Properties originally intended to put a housing complex on the land, but after assessing the neighborhood’s character and discussing with the University, that plan was axed.

United Properties was open to collaboration from the start, Champeau said, and it made sense that the University wanted a say in what happened to the land.

“We anticipated working together no matter what,” he said.

In addition to working with the private company, the University is creating a plan to outline how the institution and city should work together in future development decisions near campus, University President Eric Kaler said.

That University’s plan should be finalized in the next several weeks, he said.

Despite the ambiguity of the area’s future, Kaler said the final decision will benefit the University.

“It is important to us what happens next door, and we need to be in that conversation,” he said.