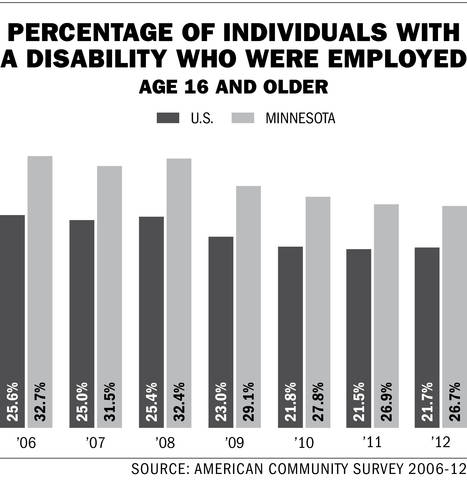 While the University would not be directly affected by the directive, the institution has a new affirmative action plan in the works that would include numerical goals regarding employees with disabilities for the first time.

Both initiatives call for at least 7 percent of employees to be people with disabilities, and Dayton specifically requires the change by 2018. But unlike the state’s mandate, the University’s plan doesn’t have a concrete deadline and calls for that proportion to be reflected across different employee groups, like management and faculty and staff members.

About 10 percent of state employees had disabilities in 1999. But by 2013, that number fell to about 3 percent.

One University student, Edward Genereux, said he’s pleased with the state’s directive because he sees himself in a government position in the future.

Genereux, who’s functionally autistic, said he plans to work for the government as a demographic analyst.

So far, the geographic information science master’s student said he hasn’t landed an internship in his field.

Although Genereux said he doesn’t think his disability has affected his employment prospects with the University, he feels it was a factor in some jobs that turned him down.

Genereux said he isn’t worried about future employment, as long as he can find an internship that could lead to a job.

As a recipient of federal funds and an institution working for government agencies, the University of Minnesota is required to have workplace policies that meet federal affirmative action guidelines that address hiring people of color, women, people with disabilities and military veterans, said Michael O’Day, assistant director of the school’s Office of Equal Opportunity and Affirmative Action.

The new policy is a shift from the present, O’Day said. Currently, the institution doesn’t specifically gather data on employees with disabilities. The new form the school would use, prescribed by the Department of Labor, would rely on self-disclosure and self-identification.

O’Day said his office is in the data collection phase, adding that the new affirmative action policy should be complete early next year.

According to the U.S. Census Bureau, about 56.7 million citizens had disabilities in 2010, which means at that time, people with disabilities made up almost one in five people nationwide. But their unemployment rate is more than twice the national average of those without disabilities, hovering near 13 percent as of August.

Smith believes the unemployment situation facing people with disabilities often boils down to fear of the unknown —specifically, the steps employers would need to take to legally accommodate a person with a disability.

“Oftentimes it comes down to lack of familiarity,” Smith said. “The governor’s directive was about training also, and I hope that in and of itself will make a difference in hiring — to make it less scary or overwhelming for employers.”