Math professor William Messing thinks the University of Minnesota should tear down Morrill Hall and house the administration in a tent.

There are too many administrators and they’re overpaid, he says. Messing, a University employee for 30 years, has an extreme view on an issue that’s heating up as the school finds itself in a budget crisis.

From within the University, critics are calling out the administration’s payroll. A Minnesota Daily analysis of the Twin Cities campus salaries shows 51 top administrators, from assistant vice presidents to the president, were paid more than $10 million in the 2010 fiscal year — an average of about $200,000 per administrator. It adds up to 1.2 percent of the University’s entire salary payout.

The University’s 987 full professors averaged $128,000 a year, accounting for 15 percent of payroll.

One University Senate committee reacted to claims of administrative bloat with a review of vice-presidential units and will complete a report in coming weeks.

In the past, the state Legislature has brought up questions of administrative efficiency. The University’s funding from the state continued its decline this year, settling at late-’90s levels. But it was the presidential transition, from Bob Bruininks to Eric Kaler, that triggered a review of the central administration now, said University Senate Committee on Finance and Planning  member Terry Roe.

The committee’s basic conclusion: “There appears to be considerable duplication of functions within the University,” according to a report draft obtained by the Daily.

Others, including Roe, say such criticism is a product of overzealous rhetoric and confusing job titles. Definitions of administration and judgments of its efficiency vary widely. 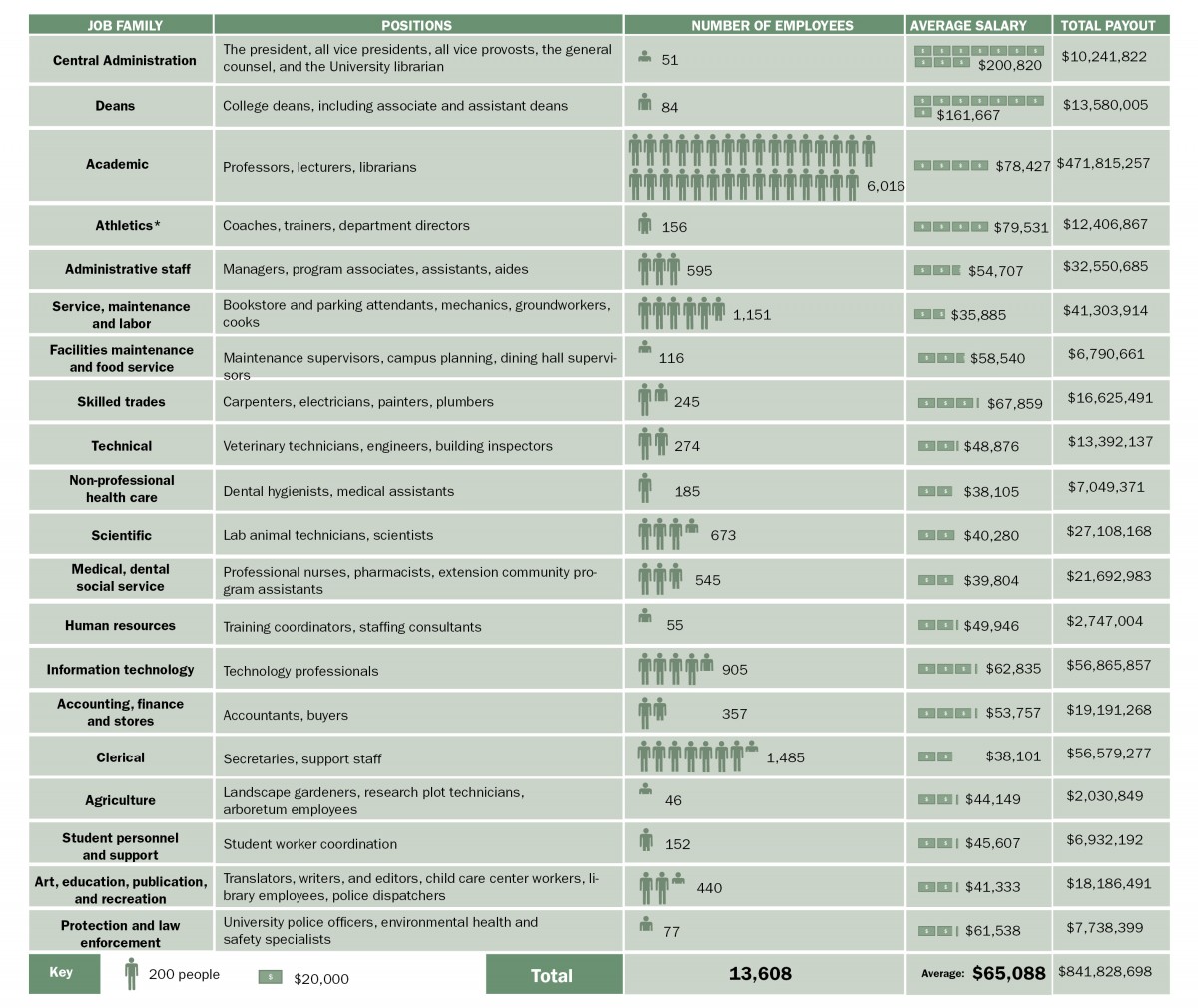 The University’s Office of Human Resources classifies jobs into families, like clerical, agricultural or academic. But those can be confusing, as when University police dispatchers are designated to an arts, education, publications and recreation job family rather than that of law and protection.

Just over a month into the presidency, Kaler has asked OHR to “more clearly identify the roles of people,” he said in a recent interview with the  Daily. “Right now, our classifications in that regard seem to be not as clear as they need to be.”

Even before Kaler took office, OHR had begun looking into job classifications to make them more accurate and specific, said Peter Radcliffe, executive director of the Office of Planning and Analysis. The classifications are used to determine appropriate pay.

The revamping will include adding new categories to adapt to the times. One example OHR Vice President Kathy Brown gave was that a new category will likely be that of social media work within communications, she said. Part of the review is surveying employees’ titles, duties and time spent on duties, she said.

“We’re putting [in] some real effort right now to try to understand” job codes across the board, Radcliffe said.

Coming up with an appropriate definition of the “administration” has been an ongoing issue, he said.

The SCFP, a group of faculty, staff, administrators and students, met with vice presidents over the past year to learn how their units work and are organized.

In the draft of the SCFP report, committee chairman Russell Luepker wrote that many units within the University have their own public relations staff, as does the central administration.

The report also points out the volume of “centers, institutes and programs” within units, and that “some may continue to play vital roles but others do not.”

But Roe and others defend the duplication.

SCFP student representative Mandy Stahre points to the Office of the Vice President for Research’s handling of grants as an example of where extra staff is necessary.

Grants come from different places, and carry with them different rules and regulations. “It helps if you have an office that’s dedicated just to research at the [University],” she said.

Luepker prefaced the report by saying it doesn’t focus on individual units because each has its own mission and activities. “Nonetheless, there are generalizations that can be made and should be considered,” he writes.

Professor Eva von Dassow visited the SCFP in 2010 to express frustration with the University’s spending.

In requesting an audit of the administration, von Dassow said it would “establish a new norm in faculty-administration relations” in the time leading to the presidential transition, according to meeting minutes.

A problem of efficiency

Regent Steve Sviggum, who had served as the Republican Speaker of the House in the state Legislature before joining the Board of Regents, said government is top-heavy, but higher education is worse.

Throughout private and public industry, productivity has increased along with efficiency, Sviggum said. And while the University has been producing more with more students, its efficiency has lagged.

Sviggum requested University employment numbers after becoming a regent in February. Those figures showed a 50 percent increase in professional and administrative staff over the past decade, he said.

But Brown points to human resources as work that is sometimes best done centrally and sometimes best done at a college level. Some have criticized having duplicative employees at central and scattered levels, but Brown said there’s logic behind it. It makes sense for individual colleges’ human resources staff to conduct performance evaluations, yet employee health care is more simply done at a central level, she said.

“When you start looking at aggregate, the number and the salaries, and then the assistants and the legislative assistants, you have to start shaking your head a little bit,” Sviggum said.

Messing said the result of the SCFP’s review should include both trimming salaries of overpaid administrators and axing unnecessary positions. He said the “bloated” administration can impact students in far-reaching ways, like tuition hikes.

“You lower the tuition and you get more scholarship money and there are many ways of doing this, at least starting to do this,” he said. “Cut the administration by 50 or 60 percent. Give the money you save to students.”

“From my perspective, the administrator making $250,000 a year is worth far less than the man who cleans the toilets. One does an honest job, the other does nothing but contribute negatively to the University.”

Kaler said he’s sure there are ways to make the University more efficient but recognizes the importance of some administration.

“We have a $3.7 billion budget, so managing that effectively means that you’re going to have some administration.”

Devin Driscoll, a past leader of the Council of Graduate Students as well as a student representative to the SCFP, agreed. He said administrative positions provide crucial student support.

Staffing levels, including for vice-presidential units, have “a very direct impact” on students, Driscoll said. He said administrative cutback has already hurt advising, a “student service” that faculty don’t provide.

As for criticism of salaries, Brown said her office and Radcliffe do market analyses to keep the University attractive compared with other schools. For example, the position of vice president for information technology has become more lucrative as the market got more competitive.

Steen Erikson, who was involved in the vice-presidential unit review before leaving the committee, said there needs to be a deeper look at how administration works before jumping to conclusions.

“There’s a handful of people that are just screaming bloody murder,” Erikson said, adding there must be a chance to look closely at “why administrative functions are there.”

As for salaries, Erikson said that compared to private industry and with the responsibilities administrators have, the figures aren’t out of line. Driscoll added they’re necessary to recruit and retain the best leaders for such a large institution.

Driscoll pointed to the “brouhaha” over Kaler’s $610,000 salary, which he said isn’t “at all outrageous for a person running what is arguably the second largest and most complex organization behind the state itself.”

Luepker said in an email that he expects the SCFP report to be finished in the next month.

Once completed, it’ll go to the Faculty Consultative Committee, an executive committee of the University Senate. FCC chairman Chris Cramer said in an email that the report is a chance to show Kaler the faculty’s perspective on the administration.

“President Kaler is, himself, looking over how he wants to structure his administration, and the report is a due diligence effort on the part of governance to provide our own perspective for him,” he wrote.

Stahre said some critics judge without seeing the complicated inner workings of the University.

“Higher [education] has its own category of what it actually is. And it’s not a business,” she said. “It’s not government. It’s not a private industry.”

“It has its own sort of rules and regulations and expectations that go along with it and I think understanding that, you need to be on both ends.”