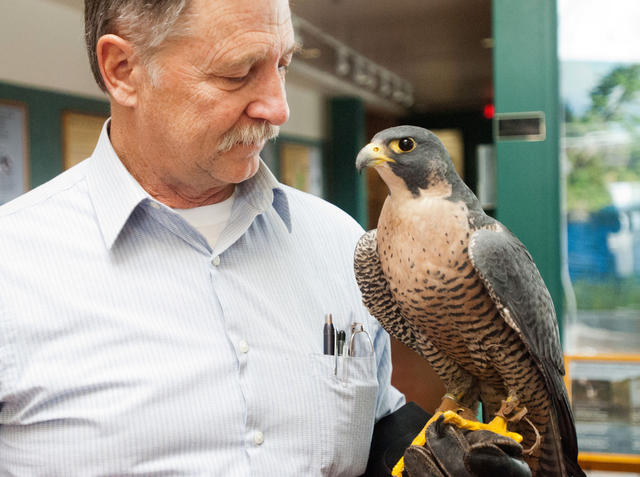 His passion for the falcons began in adolescence, so it saddened him when he learned they were on the verge of extinction.

“Not only could I not conceive of the Peregrine coming back, I had no conception that I would be involved,” said Redig, the University of Minnesota Raptor Center founder and director emeritus.

The Midwest Peregrine falcon nearly went extinct in the early 1960s, but the contributions of University professors over the past few decades helped restore the population through both natural and urban nesting sites.

Beginning in 1982, Redig and the late Harrison “Bud” Tordoff, former Bell Museum of Natural History director, collaborated to breed the falcons in captivity and release them.

Now, the peregrine population has surpassed the number of falcons that existed before they became endangered.

“No matter how you look at it, the peregrine falcon is just one of the most amazing creatures on the face of the earth,” Redig said

Peregrine falcons are light-weight, bird-eating raptors that can reach speeds of more than 200 mph when diving in the air for prey, said Amber Burnette, a Raptor Center program associate.

They nest on high cliffs and tall buildings, including sites in downtown Minneapolis and St. Paul, as well as on campus, Burnette said.

The widespread use of pesticides like DDT, which was banned in 1972, nearly wiped out the entire peregrine population in North America — east of the Rocky Mountains and south of the Arctic by the early 1960s — Redig said.

In the 1970s, a group of falconers and professors from Cornell University established The Peregrine Fund to crossbreed subspecies of peregrines, but Redig said they lacked the resources to be successful.

In 1982, Redig and Tordoff took matters into their own hands. They bred the falcons in captivity and released them along the Mississippi River, but great horned owls killed all of the peregrines.

After three years without success, Redig said they decided to release the falcons from tall buildings in cities.

“That was just an absolute watershed event,” Redig said. “It turns out peregrines love buildings.”

The falcons began claiming the buildings as their nesting sites, prompting Redig and Tordoff to build sites for them in Minneapolis locations and eventually expand throughout the Midwest.

About 40 pairs of peregrines lived in the Midwest before being wiped out by DDT. The goal of the restoration work was to breed a population about half that size.

In 2011, there were more than 300 pairs in the Midwest, according to the Midwest Peregrine Society data. They were taken off the U.S. endangered species list in 1999.

Redig has created and maintained a database of the falcons, accumulating 6,635 total branded peregrines in the Midwest since the project began.

He said tracking the peregrines has resulted in information about falcon patterns, longevity, productivity, survival of young and which falcons are genetically fit.

“So that’s just been a bonanza as far as scientific information is concerned,” Redig said.

Fallon, who became involved in the late 1980s, currently maintains about 45 nesting sites throughout Minnesota and Wisconsin.

“There’s just been so many different people that have been involved and excited to have the peregrines back,” Fallon said.

The project’s ‘heart and soul’

Breeding and releasing falcons, known as hacking, can be an expensive process, Redig said.

Most of the money came from private donations, which resulted from Tordoff’s fundraising.

“I would say he was the heart and soul of the whole thing,” Redig said. “He made a lot of stuff happen.”

Fallon said Tordoff spent thousands of hours in the field and watched birds into his early 80s. He died in 2008 at age 85.

The success of Redig and Tordoff’s work led others to consider if it could be replicated for other species, said Robert Zink, a Bell Museum Breckenridge chair in Ornithology.

Zink said the peregrine was a rare case because it prefers urban landscapes, which is a rarity among endangered species.

“It’s not clear whether this provides a model for other species that aren’t so human adaptable as the peregrines are,” Zink said.

But Redig said the story of the peregrine’s recovery might distort the complexity of endangered species restoration because the problem, DDT, was already eliminated.

Other repopulation attempts haven’t been as successful.

Redig said lead poisoning from leftover hunting ammunition is still largely responsible for endangering the California Condor. Redig has worked on trying to restore their population as well.

Ultimately, Redig said the survival of an endangered species relies on the community at large.

“People create the problem and people can fix the problem,” Redig said. “But they got to decide that they want to fix it first.”