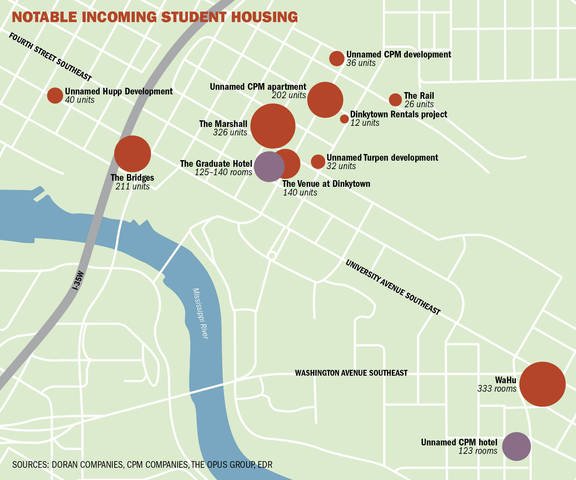 Two prominent developers around the University of Minnesota are shifting their focus from student housing to hotels.

It could mark a shift in the near-campus market where developers are taking a wait-and-see approach with so many student housing projects set to open.

Combined, Doran Companies and CPM Companies own 10 open or under construction large-scale apartment complexes with thousands of bedrooms around campus. Both developers pitched plans for their respective hotels Thursday at the city Planning Commission’s Committee of the Whole.

Last month, the University also dipped its toes in the hotel market when it acquired the Days Inn on University Avenue Southeast as part of a joint venture worth $12 million. The site is set to be redeveloped in about five years.

On the Stadium Village side

“But I think a prudent person would slow down and wait and see if [incoming apartments] fill up before going gangbusters,” he said.

CPM Companies’ proposed five-story hotel would offer 123 extended-stay rooms with kitchens at Huron Boulevard Southeast and Essex Street Southeast in Stadium Village. Oberpriller said the location is meant to eventually accommodate the University’s Ambulatory Care Center, which is set to open in 2016.

For CPM’s unnamed hotel project to begin construction in July, the Minneapolis Heritage Preservation Commission will need to approve the demolition of four single-family homes that city planning staff have not deemed historic.

Oberpriller said the University market has needed a hotel for some time now, but high land costs had deterred developers. He said CPM and Doran’s familiarity with the area played a major role in brokering their respective deals.

“We both know that there’s a need for hotels on campus,” Oberpriller said. “I don’t think there’s a secret where and what locations probably need hotels the most.”

In the core of Dinkytown, Doran Companies has proposed a six-story, 125- to 140-room hotel.

The project, known as The Graduate, hit a roadblock last month when the Heritage Preservation Committee denied demolition permits for the properties housing Mesa Pizza, Dinkytown Tattoo, Camdi Restaurant, Publika Coffee and Tea Union, and the University LifeCare Center. The commission reasoned the four-block core of Dinkytown could soon be designated a historic landmark.

The Zoning and Planning Committee will hear the company’s appeal of the decision Feb. 13.

“The public process is always hard to predict,” said CEO Kelly Doran, who won an appeal against the Heritage Planning Commission in 2012. “I don’t know one way or another what they’ll do.”

If he receives the go-ahead, Doran said he doesn’t think the two hotels will compete directly, based on the area’s need for lodging and the extended-stay hotel’s location.

Both developers plan to begin construction this summer with plans to open by summer 2015.

“We’re not going to throw more eggs in that basket,” he said. “We’re going to find a different need to bring to the market. That need is the hotel.”

Maxfield Research, which specializes in development, reported in February 2011 that student housing development would continue around campus as long as it remains lucrative. But Maxfield president Mary Bujold told the Minnesota Daily in December she wouldn’t advise building a large-scale student project in 2016 or beyond.

Because of all the development around the University, Doran said he’s not planning other student housing projects now.

“They have determined that their highest return potential is to do a hotel project,” Wittenberg said. “I don’t think it tells us anything about the housing market.”