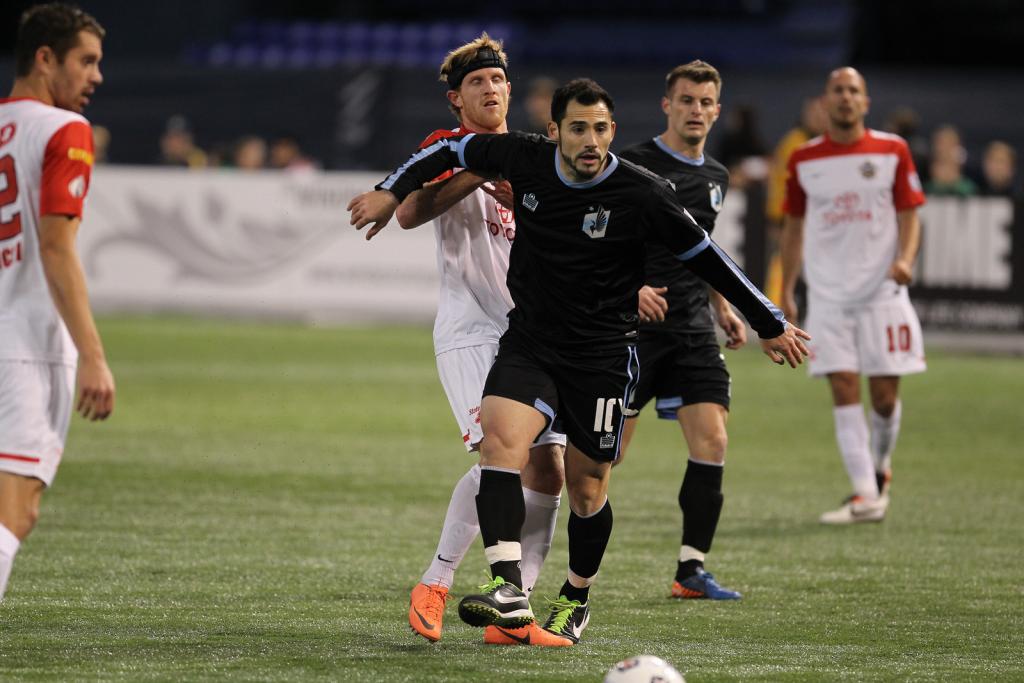 With Major League Soccer and World Cup experience under his belt, Etienne Barbara is one of the Minnesota United’s most highly decorated players. (Submitted photos)

Everyone else on the team has escaped to the locker room after the clock signals an official end to practice. Only one player remains, running sprints across the National Sports Center turf and practicing shooting drills until he’s bent over in exhaustion.

His name is Etienne Barbara, a Maltese forward who joined Minnesota United FC in January from the Vancouver Whitecaps of Major League Soccer (MLS). He was also Most Valuable Player of the North American Soccer League (NASL) — where the United plays — in 2011.

All of these accolades mean nothing, he said, if he doesn’t keep practicing and improving. An extra half hour goes by. Finally, he’s content with the day’s work.

“Back at home, we don’t even get access to simple things like parks and green grass. Here, on every block there is a park, green grass,” Barbara said. “Over there, you’d never get any chance or time to work on simple things like shooting and passing, while here, we can. That is why I take as much advantage of the resources here as I can. To keep on improving is my goal.”

Barbara is one of 23 players who comprise Minnesota United, a professional team based in Blaine that competes at the second level of American soccer — NASL — just below America’s best-known pro league, MLS. The team has performed near the top of the NASL in recent years — including a championship in 2011 and a title game appearance in 2012 — back when the name and badge were different (MN Stars FC, Thunder).

The players come from all walks of life and countries, among them Argentina, Cameroon, Bosnia, Italy, Japan and Brazil. American representation is also high, including local flavor from Woodbury High School graduate Brian Kallman.

A defender who played collegiately at Creighton University, Kallman went pro in 2006, when he signed with the Thunder. A pivotal defender for the team, Kallman has appeared more than 50 times in the starting lineup for United FC. Though he was born in Omaha, Neb., he has been a Minnesotan all his life.

“Minnesota is my home, Minnesota United my team,” Kallman said.

Like Kallman, Kevin Friedland plays defense for United. He started for the Thunder from 2004-2009 and has continued in a dual role as player-assistant coach with the United since 2010.

Because United players don’t earn lucrative contracts — a rough estimate puts salaries in the range of $1,000 to $10,000 a month — many of them have to take second jobs as high school or camp coaches. As one of the team’s veterans, Friedland has grown accustomed to wearing two hats, though it isn’t always easy.

“It’s been hard many times, because being a player and assistant coach is always a tough job,” Friedland said. “But it’s these extra things that make it fun, a fun challenge.”

“It would be nice being up there with the Twins and Timberwolves, but we’re content with our status,” Kallman said. “We really need more fans and a bigger audience, though.”

The NASL is a small niche league, with eight teams competing for the championship every year. More teams are being added, but money is always an issue when it comes to second-level franchises.

This year, with a new name, logo and owner — former UnitedHealth Group chairman Bill McGuire — the team is ready for a fresh start.

As part of a publicity blitz, the first five home games (including this month and June) are being played at the Metrodome in downtown Minneapolis instead of the National Sports Center. The United also handed out free T-shirts around the Cities to net enthusiasm for the April 6 season opener against the San Antonio Scorpions.

The Metrodome was filled with 6,754 fans for the opening strike, most of them supporting the United. It was a tense battle, with the atmosphere inside the Metrodome making it feel even more pressurized. The game was fun and fast, but unfortunately, neither side could take it to the next level by putting a finishing touch in the back of the net. Both teams settled for a scoreless draw.

Ultimately, the league is a proving ground, a place for younger players to gain experience and dream about one day reaching the MLS. Some, like Barbara — who also has World Cup experience — are playing for the thrill of a first championship. Others like Friedland know they’re nearing the end of a professional career and are trying to extract as much out of their bodies as they can.

For all of them, being able to play professional soccer is a blessing. Even if they’ll never be part of the biggest game in town, they’ll go as long as their legs allow.

“We know that we’ll never be on the list of the best in the world, but we’ll do our best to get there,” Barbara said. “The fastest way is to keep on improving on a continual basis.”

Check out the full Minnesota United schedule at www.mnunitedfc.com. 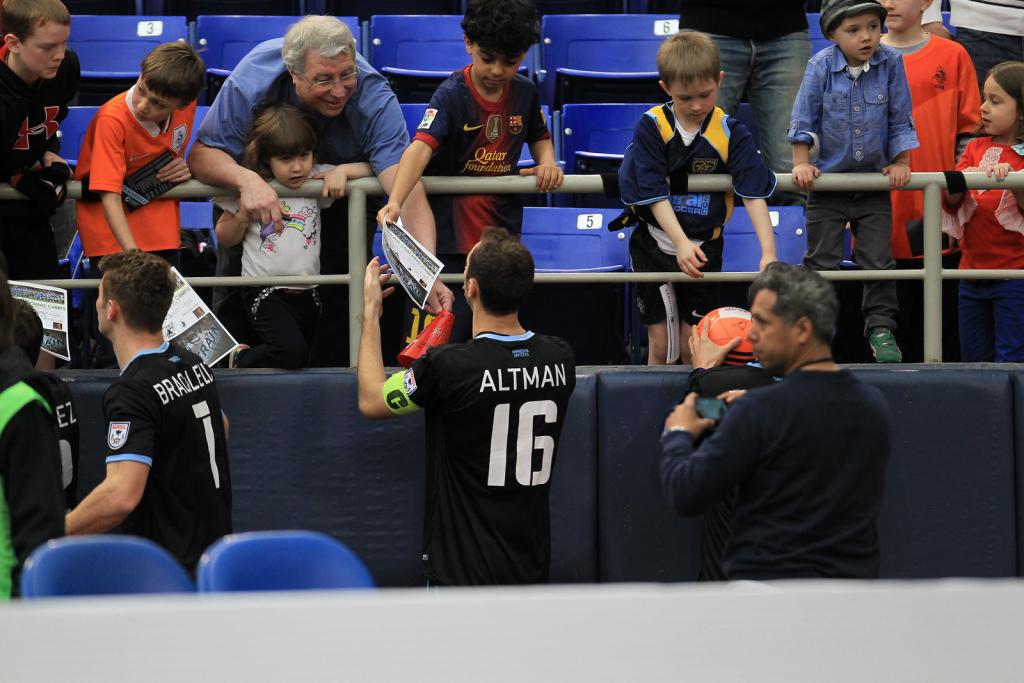 United players sign autographs at the team’s opener inside the Metrodome. 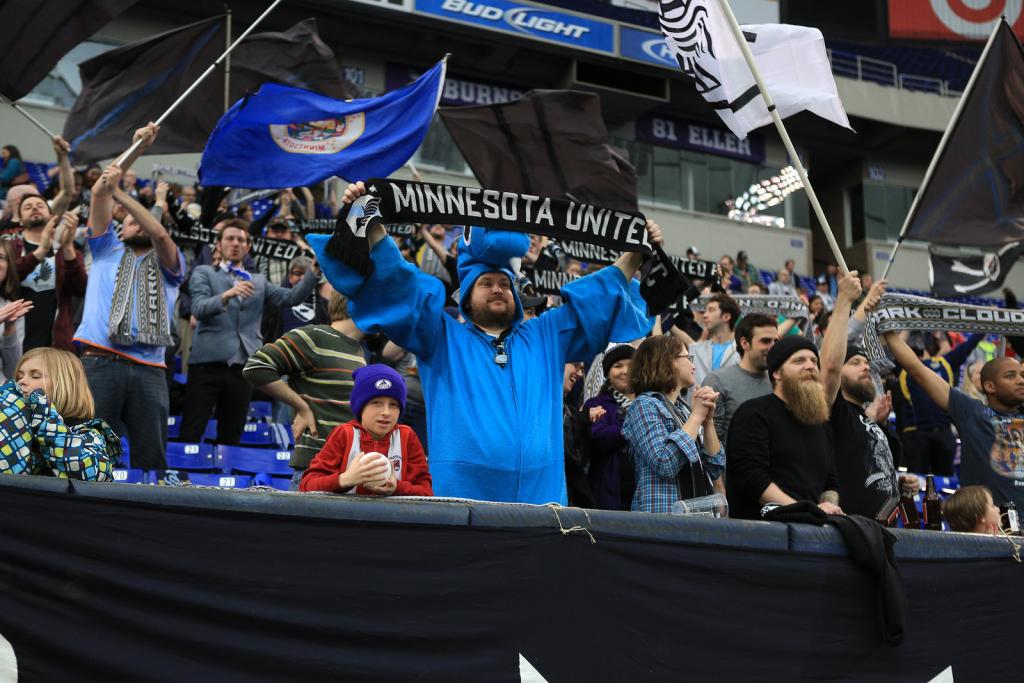 Fans get festive to cheer on the home team.