Earlier this year, the United States government took the bold step of filing a lawsuit against Deutsche Bank for its malfeasance and gross negligence in contributing to the foreclosure crisis.  Deutche Bank and one of its subsidiaries, MortgageIT, generated over $5 billion in FHA loans between 1999 and 2009.  This would have been a badge of honor if it weren’t for the fact that MortgageIT was basically lying about virtually every significant aspect of its loan portfolio.  Allegedly.

Part 1 of 4 posts delving into mortgage and policy wonkish issues.

FHA loans have rather stringent guidelines in terms of borrower income and asset verification and property conditions, but the tradeoff for originators is that they are backed by the federal government.  That insurance makes for a desirable product on the secondary market, and the feds are understandably reluctant to pay out on defaulted loans.  Originators in turn have to implement a rigid quality control process to ensure that the loans originated fall under FHA guidelines.

Their failure to adhere to those guidelines directly harmed north Minneapolis, as evidenced by numerous studies showing that Deutsche Bank was consistently among the top five purchasers of foreclosed loans in NoMi.  Nationwide, this has forced the feds to pay out over $386 million in claims for 39,000 defaulted loans, with hundreds of millions more in payouts expected.  What is even more disturbing about the loans is that they went into what the FHA calls “early payment default.”  That’s when a loan goes sixty or more days late within the first six months of closing.  Early payment defaults are a strong indication that the loan was never viable to begin with.

These are nationwide numbers, but the Housing Preservation Project study linked above tells the story of foreclosures in the 55411 and 55412 zip codes.  The data was gathered in 2008 and reflects foreclosures in 2005 and 2006, but the trends have remained consistent throughout much of the housing crisis in north Minneapolis.

In that study, Deutsche Bank was the second-leading purchaser of foreclosures at sheriff’s sales in north, picking up 14% of the tab.  In reality though, Deutsche should be number one because first place is occupied by the Mortgage Electronic Registration System.  MERS is a clearinghouse for data on loan transactions and not a financial institution.  The average length of time between mortgage origination and sheriff’s sales in north Minneapolis during the time of the study was between 21 and 22 months.  HPP breaks it down even further. 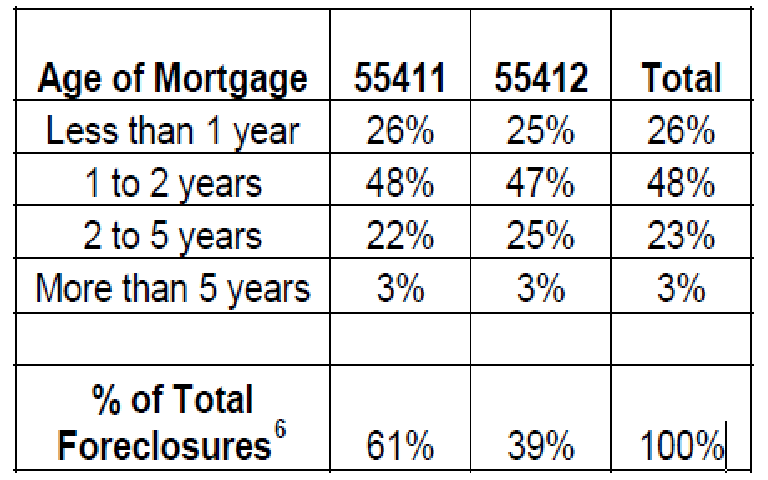 While these numbers reflect foreclosures from all of north Minneapolis, Deutsche Bank was the top foreclosing financial institution during the time of the study.

But at least they attempted to fix the problem once they were made aware of it, right?  Wait, no.  Exactly the opposite happened.  The government loan auditor was never fully trained and never given a staff to work with, even though the volume of loans required between six and eight employees to review.  Furthermore, the suit states:

“MortgageIT took the only staff member dedicated to auditing FHA-insured mortgages and reassigned him to increase production instead; and when an outside auditor provided findings revealing serious problems, those findings were literally stuffed in a closet and left unread and unopened.”

How does that translate back to the ground level of mortgage loans in NoMi?  The photo above is of the Sheltering Arms House in Hawthorne, which has been vacant for many years since a loan and subsequent foreclosure by Deutsche Bank.  There are scores of homes similarly affected by Deutsche Bank alone in north Minneapolis.

(Photo by the Hawthorne Hawkman, chart from the Housing Preservation Project)