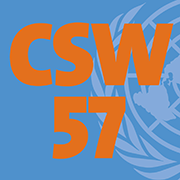 “Dreamers and Doers” is a phrase we heard repeatedly at the United Nations’ 57th Annual Meeting of the Commission on the Status of Women held last week in New York City. Dreamers imagine eliminating violence against women and girls around the world and creative ways to achieve those dreams. Doers make the dreams come true.

Dreams are taking shape and becoming reality, in part, through the creative use of media. This was highlighted by the Avon Foundation’s communication awards at a luncheon at UN Headquarters. Salma Hayek Pinault presented the awards, including the Global Award for Excellence to PCI Media Impact, an organization that uses entertainment to change attitudes and practices. PCI Media won the award for a Latin American program, “Strong Voices, Strong Women,” telenovelas about Afro-Colombian, Peruvian and Bolivian women confronting prejudice, abuse and sexual violence. You can watch a short video of their extraordinary work here: (http://mediaimpact.org/ – “what we do video”)

It was exhilarating and inspiring to meet women from around the world, all working in different ways to end violence against women. It seemed to us that almost half of the women at the conference were from Africa. One session we attended focused on Ugandan communities responding to violence against women through a program called SASA! (a Swahili word meaning “Now!”). SASA! engages community activists —mostly men—to build awareness and support to stop violence against women and to prevent HIV/AIDS by engaging their companions where they gather to drink and socialize. A video about the work of SASA! is available here: http://www.youtube.com/watch?v=qb_Jf_W2-h4

Another cornerstone of almost every official country report was the importance of coordination among police, health professionals, prosecutors, judges, NGOs and other service providers. Whether the response is labeled “coordinated community response,” “multi-sector response” or “holistic approach,” it is derived from the Duluth model developed in Minnesota more than 30 years ago.

Not to be missed among all of the presentations and discussions was the celebratory tone resulting from the reauthorization of the Violence Against Women Act, signed into law by President Obama on Thursday of the annual meeting. Much of the credit for overcoming the obstacles in getting the law passed is due to the heroic efforts of the Office on Violence against Women (OVW) in the U.S. Department of Justice.

We had a chance to catch up with Sue Carbon, the former director of OVW, over dinner on Sunday night. Sue traveled with us to Kazakhstan last year and is a great supporter of The Advocates. Also, some members of our delegation heard Bea Hanson, the current acting director of OVW, speak about the battle to get the law passed in a form that includes protection for some of the most vulnerable women, including Native Americans, immigrants and LGBT populations.

We are coming home brimming with ideas and inspiration to continue our own work to end violence against women. We are so grateful for conferences like the CSW that bring together advocates and officials from all over the world to share stories and support for our ongoing work as Dreamers and Doers.

By Carolyn Chalmers and Helen Rubenstein. Chalmers, a member of The Advocates of Human Rights’ board of directors, is the director of the Office of Conflict Resolution, at the University of Minnesota, Twin Cities. Rubenstein is a staff attorney with The Advocates.