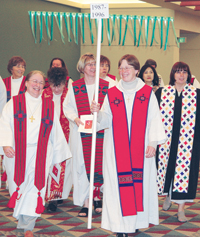 On May 4, 1956, the Methodist Church national conference met in Minneapolis and voted to give women full clergy rights. Although women had long been ordained as Methodist ministers, they weren’t guaranteed a parish, as men were. As a result, women who felt the call often found themselves itinerate preachers, wandering from town to town, with no congregation or church to call home. They also didn’t have the same voting rights in the church as men did, so they had less control over the church’s direction and their own fate.

But 50 years ago that changed—or started to change. Today, 116 women make up about one-third of United Methodist’s 351 active clergy in Minnesota.

Bishop Sally Dyck is one of them. Dyck, who’s responsible for the 400 United Methodist churches in Minnesota, spoke at this year’s May 4 celebration. For her, the occasion was both joyous and somber.

“Other women went before us and made this day possible,” she said in an interview before the event. “The first [women] trustees, the first ushers—oh my gosh, you’d think that was the end of the world. We need to remember all of those women who made it possible and all of those women who couldn’t fulfill what their calling was. Those are a lot of buried gifts.”

Dyck also argues that until all Christian women can be ordained, the battle is not yet won. “I have always believed that until my Catholic sisters can fully live out their calling, then I’m not fully recognized by the Christian church,” she said. “Many of them are parish workers [and] they do everything but the sacramental things, and the church relies on them. Yet they don’t have full clergy rights.”

Dyck doesn’t think the Catholic Church will change anytime soon, but that’s all the more reason to keep talking about it, she said. During a recent conference in Brazil, she was reminded of how many people still view the idea of women clergy as revolutionary.

“Total strangers would just grab me and have their picture taken with me to prove to somebody, maybe even themselves, that women could be clergy,” she said. “The pastor of the church I preached in, I think he wanted to raise people’s awareness that women can be at all levels—it’s important for both men and women to witness.”

As for those who argue that the Bible clearly bars women from positions of authority, Dyck says they rely too heavily on certain passages, some of which have been mistranslated from the Greek manuscripts. Women aren’t told not to speak in public, she explained—they’re being told not to chatter in the middle of someone else’s sermon. There’s also plenty of evidence that women were revered leaders and teachers in the early Christian church, she said.

For now, said Dyck, “We continue to make our way and fulfill our calling in a variety of settings.”

We welcome your thoughts on women in the clergy in our “Community Culture forum”:https://www.tcdailyplanet.net/forum/61