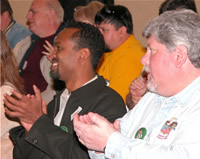 Nearly 100 union members and allies urged legislators to investigate the effects of the underground cash economy in Minnesota.

Building Trades unions are leading a push for a state investigation into what they say is a growing, underground cash economy in Minnesota.

Evidence shows that employers who pay workers in cash are more likely to avoid paying state and federal income taxes on those workers, avoid paying Social Security and Medicare taxes, and avoid making unemployment and workers compensation payments, said Alan Kearney, of the Laborers District Council of Minnesota and North Dakota. Those practices by unscrupulous employers could be costing Minnesota at least $250 million a year in revenue, Kearney said, based on findings from elsewhere in the country. That missing revenue would go a long way toward helping the state meet its needs in paying for education, health care, transportation and other public services, he said. The increasing presence of these kinds of employers makes it more difficult for employers who do follow the law to compete, he said. It also provides incentive for responsible employers to cut corners as well.

Department of Labor criticized
To launch the campaign, more than 100 union members and faith and community allies met Wednesday at the Lakes and Plains Regional Council of Carpenters. before heading to the Capitol to talk with legislators about a state investigation.

Employer abuse of basic payroll requirements highlights another problem, Kearney said: the inability or unwillingness of an understaffed Department of Labor and Industry to enforce basic worker protections. “DOLI is not doing its job,” he said.

Building Trades organizers are running across an increasing number of job sites where demolition and other basic work is being done “by workers off the street” in “appalling” conditions, Kearney said. Many times, workers lack even basic safety gear; at one site in downtown Minneapolis, workers were removing asbestos but didn’t even have dust masks, Kearney said, let alone other required containment equipment.

It took weeks to get a response from the department, Kearney said; now, the only information organizers can get is that an investigation is “ongoing.”

Worker gets brush-off
Individual workers trying to get help at the department run into the same “daunting” experience, Kearney said.

“The bottom line is, it was a complete waste of time,” said Richard Rodgers, a worker who went to the department trying to collect $250 in back wages for demolition project he did at a downtown Minneapolis loft conversion. The investigator told him to write a letter to his boss, he said. “It was frustrating. It was discouraging. They just put me out.”

If the department doesn’t help workers like Rodgers, Kearney said, their only recourse may be small-claims court.

But that may not be a real option, either, said Matt Gladue, of the Twin Cities Religion and Labor Network. Filing a claim costs $60, an amount that may be more than workers can afford.