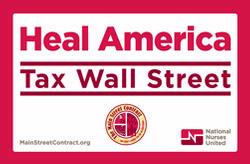 Claiming to represent “the 99 percent” of Americans whom the economy is failing, protesters took over a park in New York’s Financial District two and a half weeks ago. They began staging rallies against corporate tax loopholes, income inequality and CEO compensation. And they haven’t left since.

Occupy Wall Street also has sparked solidarity demonstrations nationwide, including one set to begin in Minneapolis on Friday. The Occupy Minnesota demonstration will begin at 9 a.m. in Government Plaza – or the “People’s Plaza,” as protesters will call it – and continue through the weekend.

Locally, unions are beginning to line up in support of Occupy Minnesota.

The state’s largest labor federation, the Minnesota AFL-CIO, sent an e-mail alert today to its activists, urging them to join the demonstration. “We hope to see you there as we stand in solidarity with those determined to hold Wall Street accountable and create good jobs,” the e-mail said.

The Service Employees International Union, with 30,000 members in Minnesota, sent a similar e-mail to its members.

“Millions of Americans, including members of SEIU and the labor movement have been demanding that Wall Street and powerful interests be held accountable for the damage their reckless behavior has wracked on our economy and begin to pay their fair share,” said Carol Nieters, executive director of SEIU Local 284. “By putting their bodies on the line, Occupy Wall Street activists have given a powerful new expression to the hopes of people all over the country.”

A handful of union members and staff have been “loosely involved” in planning Occupy Minnesota, according to Osha Karow, a spokesperson for organizers behind the demonstration.

“The occupy movement is all about creating a unified voice for everybody, including unions, to speak for the 99 percent,” Karow said. “We’re the taxpayers that are people just like you and me. We’re union workers, college students, the elderly … who don’t have the loopholes that get the other 1 percent out of having to pay taxes.”

Of course, that’s a message several labor unions have been preaching for years.

In June more than 1,000 members of National Nurses United marched on Wall Street in protest, and the local labor-backed coalition Minnesotans for a Fair Economy staged a string of demonstrations outside local offices of big banks like Wells Fargo and Bank of America this summer.

“It’s our belief we were out ahead of the game on this,” said Bernadine Engeldorf, a member of the Minnesota Nurses Association and a vice president of National Nurses United. “We’ve had our eye on Wall Street for some time.”

Working on the frontlines of the nation’s health care system, Engeldorf said, nurses see firsthand the toll this recession has taken on the “99 percent.”

A nurse in a mental-health facility, Engeldorf said she sees joblessness and economic pressures turn to “depression and thoughts of suicide” among her patients. “It’s a natural connection for nurses,” she added.

National Nurses United was among the first unions to publicly endorse Occupy Wall Street. The union issued a press release earlier this week “welcoming” the campaign and solidarity events in cities like Minneapolis.

Engeldorf said she and other nurses are “hoping to be involved” in Occupy Minnesota this weekend. “I’ve had people calling me from Mankato, Duluth and the metro area,” Engeldorf said. “They want to know, ‘Where are we at? Are we going to be there?’”

Occupy Minnesota, which acts on the consensus of a “general assembly” that will meet regularly during the protest, has established a committee focused on outreach to supportive organizations like unions and labor federations. To contact the committee, e-mail orgoutreach@occupymn.org.